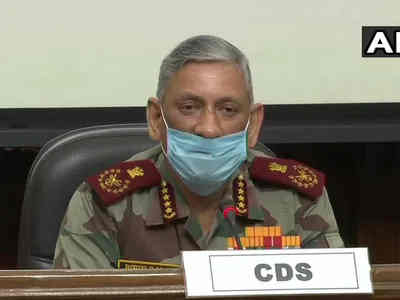 To express the gratitude of our Armed Forces and underlining their support to the frontline corona warriors, the Chief of Defence Staff General Bipin Rawat announced on Friday some symbolical activities that the nation will witness on 3 May. In a special press briefing held in the presence of all three Services Chiefs, Gen Rawat said the Indian Air Force aircraft will carry out flypasts, Navy ships will be lit up and Army will undertake band performances across the country to thank all COVID-19 warriors. His announcement came amidst the Central Government’s decision to extend the lockdown by two weeks, starting 4 May.

Gen Rawat ruled out any inference indicating that the Chinese coronavirus pandemic is a result of  biological warfare and said it would not be proper to say that. He also emphasised that no operational task has been affected or would be affected due to the pandemic.

Army Chief General M MNaravane said that there would be no let-up in counter-terror operations due to coronavirus pandemic. He also pointed out that there has been an increase in the number of infiltration attempts along the Line of Control (LoC).

On the issue of evacuation, Chief of Naval Staff Admiral Karambir Singh said, “Navy and IAF are ready to evacuate Indians abroad. We have a large diaspora. Our ships are ready. We are fully ready.”

Speaking during the press conference the CDS said the entire world is fighting the menace of COVID-19 and like everybody else, our nation has been impacted. We express our gratitude to all Corona Warriors. He further said that on behalf of armed forces, we want to thank all COVID-19 warriors: doctors, nurses, sanitation workers, police, home guards, delivery boys and the media which has been reaching out with the message of the government on how to carry on with our lives in these difficult times.

Providing details of the activities, Gen Rawat said the Indian Air Force will conduct flypasts from Srinagar to Trivandrum from Dibrugarh in Assam to Kutch in Gujarat on 3 May evening. It’ll include both transport and fighter aircraft.

Talking about Indian Army’s activities, Gen Rawat said that the Army will also conduct mounted band displays in close proximity of COVID-19 hospitals in almost every district of the country. The armed forces will also lay wreathes at the police memorial on May 3 in support of the police forces. During the flypast, the aircraft will also shower flower petals at some places.

He said that the Indian Navy will have its warships deployed in formations in coastal areas in the evening, on May 3. Navy warships would also be lit up and their choppers would be used for showering petals on hospitals.

The plan of action to hold special activities was finalised at the meeting earlier in the day presided over by the Defence Minister with the NSA, the CDS and all three Services Chiefs in the capital.