The award by the Permanent Court of Arbitration against the Chinese in the South China Sea (SCS) case that Philippines had initiated, has been received with much enthusiasm even beyond the SCS rim countries. There is a need to also consider historical evidence of similar practices as reclaiming of islands and building of assets like runways that have military implications for the region by other countries in the region. Of course, to claim almost the entire SCS as its own is not an argument that anybody other than the Chinese would subscribe to. Maj Gen PK Chakravorty factually presents the role of most parties that are claimants to SCS islands, and then goes on to suggest a way ahead.

ON THE SOUTH CHINA SEA DISPUTE

The arbitration award by the Permanent Court of Arbitration (PCA) or Tribunal in the dispute between Philippines and China is a unique judgement under the United Nations Law of the Sea Convention (UNCLOS). The South China Sea encompasses an area of about 1.4 million square miles. The area has immense geo strategic significance as one third of the world’s shipping utilises these waters and is reported to be holding proven oil and gas reserves beneath its seabed. It is located in close proximity to China, Vietnam, Cambodia, Philippines, Malaysia, Brunei, Singapore and Indonesia.

The Sea contains over 250 small islands, atolls, cays, shoals, reefs and sandbars which have no inhabitants. Many of these are submerged during high tide. The main archipelagos are Paracel Islands, Spratly Islands, Pratas Islands, the Macclesfield Bank and the Scarborough Shoal. There are several claimants to these islands. China craftily annexed the Paracel islands in 1974. China and Taiwan claim the entire Sea as belonging to them. The Nine Dash line virtually overlaps with other countries in the region. Broadly the competing claims comprise as stated below:-

The Paracel and Spratly islands are the major group of islands. In January 2103, Philippines initiated proceedings against China under Annexure VII to the UNCLOS. Philippines sought a ruling that claims of China in the South China Sea must be in consonance with UNCLOS definition of Exclusive Economic Zone (EEZ).

Reclamation of lands in the South China Sea has been an ongoing process by various countries. China initiated the process by building a full-fledged air base in Woody Islands which forms a part of the Paracel Group of islands.

In 2003 Malaysia reclaimed land in Swallow Reef enabling a runway, 1368 metres in length, to be constructed that would allow cargo, surveillance and fighter aircrafts to operate. Vietnam followed in quick succession by constructing a runway of 550 metres length in Big Spratly Islands which is being utilised similarly. In 2006, Taiwan constructed a runway 1195 metres in length at Itu Iba Island capable of handling most aircrafts. Philippines constructed a 1400 metres airfield at Thitu Island in 2014 capable of handling a variety of aircraft.

Recently China’s reclamation of islands has grown dramatically. It has reclaimed 2900 acres of landmass across a string of islands in the Spratly Group. The construction is focussed on Gaven Reef, Johnson South Reef, Fiery Cross Reef and Hughes Reef. The islands are big enough to erect buildings house equipment and have a big runway on Fiery Cross Reef. At some sites, China has excavated deep channels and has built new berthing areas to allow access for larger ships that could be used to assert territorial claims. It is reported by the Wall Street Journal in May 2015 that China has placed two mobile artillery units on Johnson Reef. 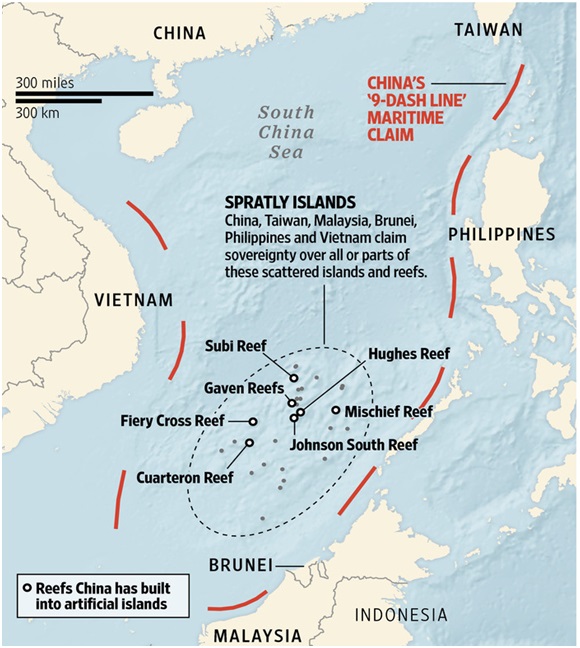 The map indicates the area where China is reclaiming the reefs to build infrastructure for runways and berthing sites. A major airfield is being constructed on Fiery Cross Reef which would facilitate operation of most aircraft.

Gist of the Ruling of PCA Philippines had submitted 15 points for arbitration by the PCA. In its award on 12 July 2016, the Tribunal considered a number of preliminary matters with respect to jurisdiction. The Tribunal noted that both the Philippines and China are a party to the UNCLOS Convention and the Convention does not permit a State (in this case China) to except itself generally from the mechanism for the resolution of disputes set out in the Convention. The Tribunal held that China’s non participation does not deprive the Tribunal of jurisdiction and that the Tribunal has been properly constituted pursuant to the provisions of Annexure VII to the Convention, which includes a procedure to form a tribunal even in the absence of one party. It is pertinent to note that the PCA rejected an argument set out in China’s Position Paper and held that the mere act of unilaterally initiating arbitration cannot constitute an abuse of the Convention. 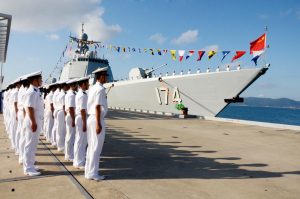 Navy officers attend a flag-presenting ceremony as the Hefei, the third 052D Type 052D guided missile destroyer commissioned by the PLA Navy is delivered to the South Sea Fleet on December 12, 2015 in Sanya, Hainan Province of China. (Image Courtesy: Time)

The PCA rejected China’s contention that the dispute is regarding Maritime Boundary delimitation and therefore excluded from Dispute settlement by Article 298 of the UNCLOS Convention. It observed that a dispute concerning whether a State has an entitlement to a maritime zone is a distinct matter and there is no confusion. The PCA also rejected the Chinese argument that as per 2002 ASEAN – China declaration on the conduct of parties in the South China Sea, Philippines was not correct in initiating arbitration. The Tribunal observed that it was a political agreement and not legally binding.

Accordingly China had no exclusive rights historically in the high seas. The Tribunal concluded that the nine dash line did not give China exclusive rights in the high seas. The PCA examined the status of the features in the South China Sea. A technical evaluation was conducted to find out if the disputed features stayed above water on high tide. Under Articles 13 and 121 of the Convention lays down that features that are above water generate an entitlement of 12 nautical miles territorial waters; whereas features that are submerged during high tide have no entitlement. The Tribunal agreed with Philippines that Scarborough Shoal, Johnson Reef, Cuarteron Reef, Fiery Cross Reef are high tide features and Subi Reef, Hughes Reef, Mischief Reef, Second Thomas Shoal were submerged at high tide in their natural conditions. 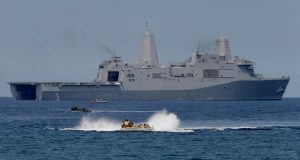 The Tribunal disagreed with the Philippines regarding the status of Gaven Reef (North), and Mckennan Reef. It was concluded that both are high tide features. Further the tribunal concluded that none of the features in the Spratly Group of islands are naturally habitable or possible to undertake economic activities.

Currently, features occupied have been reclaimed, provided with desalination plants and occupied by officials from claimant countries. Accordingly none of these features can generate an Exclusive Economic Zone of 200 nautical miles. The Tribunal also held that the Convention does not provide for a group of islands such as the Spratly Islands to generate maritime zones collectively as a unit.

Based on these deductions, the Tribunal found Mischief Reef, Second Thomas Shoal are submerged at high tide and accordingly form a part of the Exclusive Economic Zone and Continental Shelf of the Philippines. Further China had interfered with petroleum exploration at Reed Bank, protected and failed to prevent Chinese fishing in the area as also constructed installations in Mischief Reef. This was violation by China of the sovereign rights of Philippines.

As regards Scarborough Shoal it is above water at high tide and generates an entitlement to territorial waters. In this area China had claimed this feature which does not belong to any country, and had and prevented fishing by Philippines. The Tribunal therefore clarified the 15 issues raised by Philippines and expressed faith that both countries would follow the rules of UNCLOS.

Reactions to the Ruling 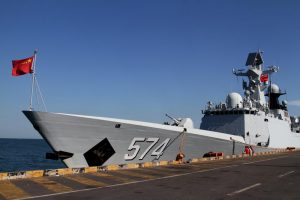 China reacted very strongly to the verdict. The Chinese President Xi Jinping said, China’s territorial sovereignty and marine rights in the seas would not be affected by the ruling, which declared large areas of the sea to be neutral international waters or the Exclusive Economic Zone of other countries. He insisted China was still committed to resolving disputes with neighbours.

Chinese state media reacted angrily. Xinhua, the country’s official news agency hit out at what it described as an ill founded ruling that was null and void. Philippines Foreign Affairs Secretary welcomed the ruling and called for restraint and sobriety. The US State Department called on both parties to comply with their obligations. The Indian Government’s official reaction was prompt and measured which called on all parties to show the utmost respect for UNCLOS.

Implications and Way Ahead

The ruling by the PCA is certainly a loss of face for China. However, it is pertinent to note that the PCA lacks enforcement capability. Accordingly China could totally ignore the ruling or take calibrated steps to resolve the issue with other countries. China is now moving towards becoming a super power and would do its utmost not to get involved in a conflict with the claimant countries.

The US would certainly not get involved in a conflict situation on this issue and would work towards a peaceful settlement. It is possible that China would continue its land reclamation and construction efforts in the Spratly islands. Currently 3200 acres of land have been reclaimed in the seven features that China occupies. This would allow China to maintain a more sustained presence in the area. China has already threatened to establish an Aircraft Defence Identification Zone (ADIZ) which could be utilised for ensuring Air Dominance over the area. None of the claimants have the capability of enforcing the ruling and they have to diplomatically deal with China.

The PCA decision does not impact India’s trade routes but being a net security provider for South Asia, it must note the move of Chinese PLAN to the first island chain. India must also take note of the Chinese attempts at creating infrastructure in the Indian Ocean region. China is involved in Djibouti in Africa, Maldives, Gwadar in Pakistan, Hambantota in Sri Lanka, Sittwe in Myanmar and efforts are on to develop a port in Bangladesh. There is a need for the Indian Navy to develop its capability to keep a track of Chinese naval forays in the region. Further, India must enhance its investments in the port of Chabahar in Iran to enable our presence in the region.

It may be concluded that the PCA ruling of 12 July 2016 has clarified numerous issues on the Law of Sea and possibly, diplomatically pointed out to China to control its assertiveness in the region. The ruling should result in better understanding between the claimants in the South China Sea.