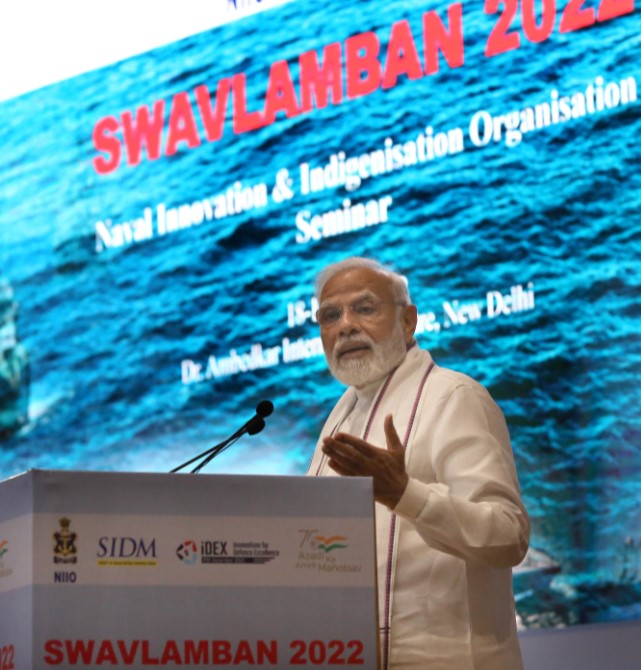 Prime Minister Narendra Modi said India’s defence imports have come down by about 21 per cent in the last 4-5 years and exports hit a record Rs. 13,000 crore last year, with more than 70 per cent of which being from the private sector. “Today we are moving fast from the biggest defence importer to a big exporter,” he said on Monday during an address at the Naval Innovation and Indigenisation Organisation (NIIO) seminar ‘Swavlamban’ that brought stakeholders together to bolster ‘atmanirbharta’ (self-reliance) in the Indian Navy that aims to induct at least 75 new indigenous technologies and products. This collaborative project is named SPRINT (Supporting Pole-Vaulting in R&D through Innovations for Defence Excellence (iDEX), NIIO and Technology Development Acceleration Cell (TDAC)).

The Prime Minister said that the resolution of creating 75 indigenous technologies in this period of making new resolutions for India is inspiring and he expressed confidence that it will be fulfilled very soon. “We must work to continuously increase the number of indigenous technologies. Your goal should be that when India celebrates 100 years of its independence, at that time our Navy should be at an unprecedented height”, he added.

He commented that the role of the Indian Navy is continuously increasing and therefore its self-reliance is of critical importance also stressed that the goal of attaining self-reliance in defence was critical for the country in the 21st century and innovative indigenous solutions were important for future challenges. “Innovation is critical, and it has to be indigenous. Imported goods can’t be a source of innovation”, PM observed. He also called for a change in mindset and the need to move away from imported goods.

Prime Minister recalled how his government has been working in mission mode to reduce this dependence after 2014. He remarked that the government has given new strength to our public sector defence companies by organising them in different sectors. “Today we are making sure that we connect our premier institutions like IITs with defence research and innovation. Learning from the approach of the past decades, today we are developing a new defence ecosystem with the strength of everyone’s efforts. Today defence R&D has been opened for the private sector, academia, MSMEs and start-ups”, he added. This has led to a new speed in long pending defence projects and the Prime Minister expressed the confidence that the wait for commissioning of the first indigenous aircraft carrier will be over soon.

Defence Minister Rajnath Singh speaking at the event, said self-reliance not only meant overcoming economic constraints, but also achieving decisional autonomy for the country by overcoming diplomatic constraints. “The self-reliance efforts in the defence sector, under the guidance of the Prime Minister, have transformed India’s image and we will soon become a global manufacturing hub,” he added.

Singh complemented the Indian Navy for playing a pioneer role in this endeavour by making remarkable progress in surface, sub-surface and air domains, setting up an ‘in-house-ship-design-organisation’ and transforming itself from a ‘Buyer’s Navy’ to a ‘Builder’s Navy’. He described the ever-increasing indigenous content in warships as a testament to Indian Navy’s unwavering commitment towards ‘Aatmanirbhar Bharat’, saying that it is a matter of great pride for the nation that the shipyards and the industries are together developing the capacity and capability of the Armed Forces. 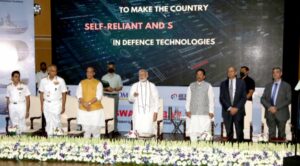 Defence Minister informed that in line with the ‘Aatmanirbhar Bharat’ campaign, the Indian Navy spent over 64 per cent of its capital budget on domestic procurement in the last financial year and it is expected to increase to 70 per cent in the current financial year. With the active participation of the private sector, MSMEs and start-ups, innovation in the defence sector is being promoted through several projects under the iDEX initiative and ‘Technology Development Fund’. He highlighted that due to these efforts, Indian Navy has developed the necessary capabilities to not only safeguard India’s maritime interests but also of its friendly countries in line with the Prime Minister’s vision of ‘Security and Growth for all in the Region’ (SAGAR).

The two-day seminar aims to orient industry and academia towards achieving self-reliance in the Defence sector. It will provide a platform for leaders from industry, academia, services, and government to come together on a common platform to ideate and come up with recommendations for the defence sector.