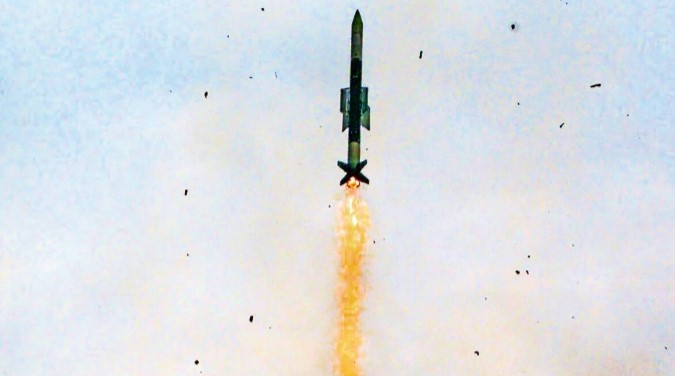 The indigenously developed ship-borne weapon system, Vertical Launch Short Range Surface to Air Missile (VL-SRSAM), was successfully flight tested by the Defence Research and Development Organisation (DRDO) for naval warships and Indian Navy off the Chandipur coast in Odisha on 23 August. The flight test was carried out from an Indian Naval Ship against a high-speed unmanned aerial target for demonstration of vertical launch capability. The missiles, equipped with indigenous Radio Frequency (RF) seeker, intercepted the target with high accuracy. The VL-SRSAM has been indigenously designed and jointly developed by three facilities of the DRDO for Indian Naval warships and is meant for neutralising various aerial threats at close ranges including sea-skimming targets. The missile is said to be fitted in destroyers, frigates, corvettes, and aircraft carriers.

“During the test launch, flight path and vehicle performance, parameters were monitored using flight data, captured by various Range instruments such as Radar, Electro-optical tracking system (EOTS) and Telemetry systems deployed by ITR, Chandipur. The launch was monitored by senior scientists from various DRDO labs involved in the design and development of the system such as Defence Research & Development Laboratory (DRDL), Research Centre Imarat (RCI), Hyderabad and R&D Engineers, Pune,” said the Ministry of Defence (MoD) in a statement.

The VL-SRSAM system has been designed to strike high-speed airborne targets at the range of 40 to 50 km and at an altitude of around 15 km. DRDO officials have said its design is based on the Astra missile Mark I, which is a Beyond Visual Range Air to Air missile. VL-SRSAM was conceived for the area and point-defence role to save naval platforms. The missile system was successfully tested in February and December last year and again in June this year.