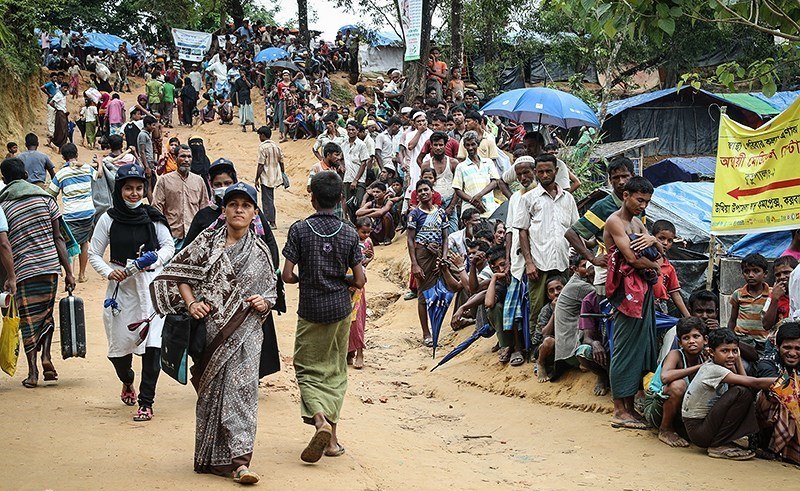 The Rohingya Saga And Pakistani Involvement

Much has been written and debated about Pakistan’s involvement in the proxy war in Jammu and Kashmir (J&K) as also its arming of lethal terror outfits like Lashkar-e-Taiba (LeT) and Jaish-e-Mohammad (JeM) and the considerable role that Pakistan has played in the Taliban’s return to power in Afghanistan, however, its role in radicalising young Rohingya Muslims and support to terror outfits to destabilise an already overheated region has not been reported extensively enough. However, before we go into the Pakistani role in the spread of terror in the region, the Rohingyas and their grievances require a visit.

The Rohingyas are residents of the Rakhine state of Myanmar. Rohingyas claim a millennium-old history of living in Western Myanmar. However, they are not recognised as an ethnic entity by Myanmar’s government. The 1982 Myanmar Nationality Law does not recognise them as citizens. The Myanmar government does not accept the term ‘Rohingya’. Instead, they are referred to as Bengalis. They face restrictions in movement, education, and access to jobs. Myanmar was host to over 1.4 million Rohingyas, primarily living in the Rakhine state (earlier known as Arakan), till repeated cycles of violence led to progressive emigration of these people, primarily to neighbouring Bangladesh. The violence in 2017, post the killing of Myanmar Army soldiers, led to harsh retaliation by government forces, triggering an exodus of over 625,000 Rohingyas to cross over to Bangladesh. In India, over 40,000 Rohingyas live, a large percentage without valid documents.

Disturbed geographies, overflowing refugee camps, and hundreds and thousands of disenfranchised men and women without any hope to live provide fertile grounds for terrorist movements to grow. With the ISI and terrorist organisations based in Pakistan looking for such opportunities, the Rohingyas have more than captured their imagination. Among the first to exploit the Rohingya people were Lashkar-e-Taiba, aided by the Pakistani ISI.

Falah-e-Insaniyat Foundation, a front-end of Lashkar-e-Taiba (LeT) serves to surreptitiously develop contacts and gain acceptance of the LeT through charitable initiatives in areas and among the populace of their interest. LeT uses these as platforms for furthering its agenda. They entwine local grievances with larger issues to spread the story of the religious victimisation of Muslims.

The Tsunami of 2004 brought with it the need to provide relief to Rohingyas in southern Bangladesh. Falah-e-Insaniyat seized the opportunity. Their initiative also drew similar NGOs with links to the ISI, like the Al Khidmat Foundation. The foundation later organised a seminar in Turkey on the Rohingya problem. Shahid Mahmood, Falah-e-Insaniyat’s Head of Foreign Operations, admits reaching out to Rohingyas “in extremely risky conditions”.

While assistance post the Tsunami was no offensive action, the other activities in its wake by the LeT and the charitable foundations were alarming. These included indoctrination and radicalisation of the already disgruntled Rohingyas. In parallel, LeT, with its considerable resources, also started imparting training in the use of arms.

Meanwhile, in the Chittagong Arms Haul Case of April 2004, 12 truckloads of weapons were seized. Subsequent investigations confirmed that some of these weapons were meant for the Rohingya Solidarity Organisation (RSO). An IED blowing up in Kyaung Taung that killed a few Rohingyas along with a few Pakistanis further confirmed the Pakistan- Rohingya nexus.

The LeT increased its activities in 2012 in Myanmar. In July 2012, Hafiz Saeed organised a conference in Pakistan and extolled the virtues of jihad as the route for the deliverance of Rohingyas. He also appointed Abdul Qudoos al Burmi as the leader of Harkat-ul Jihad-al-Islami (HUJI- Arakan) in 2012. Burmi had fled to Pakistan in the 1980s and was based in Karachi.

According to reliable sources, Burmi recruited Hafiz Tauchar aka Ataullah from Muangdaw in Myanmar and had him trained in Pakistan. Tauchar is a Pakistani-born Rohingya and has undergone a Theology course in Saudi Arabia. Tauchar took over HuJI-Arakan, and the organisation was renamed Arakan Rohingya Salvation Army. Since then, LeT has been sending its senior operatives to streamline the arms movement with Salahul Islam, the first military chief of RSO. On 9 October 2016, Rohingya militants attacked No 1 Border Guard Police Command Headquarters in Kyikanpyin and the Ngakhuya local administrative office.

Evidence of LeT involvement in Myanmar and Rohingya was received in 2014-15 when a group of Sikh militants were arrested in Thailand. They had undergone training in explosives at a Rohingya camp. One of the militants, Harminder Singh Mantu, revealed in the interrogation that among the trainers were Ustad Wazir, a LeT veteran, and Col Chaudhary, an officer of the ISI.

Myanmar is also an intersection where Pakistani and Chinese interests meet to scuttle joint India- Myanmar developmental projects. Like Pakistanis use a proxy as far as feasible, the Chinese use multiple militant groups as proxies in Myanmar. One such group is the Arakan Army raised in 2009. The Kaladan Multi-Modal Project was signed between India and Myanmar in 2009 and had, over the years, triggered the Chinese move to back Arakan Army and use it to stall Indian projects.

LeT has good reasons to internationalise the Rakhine issue in the Jihadi world and draw fighters worldwide to fight against the Myanmar Army. LeT, in the bargain, will gain stature in the dark world of jihadi politics. By strengthening its hold on the RSO, LeT and Pakistani ISI would be able to calibrate cases of attacks on Myanmar forces, thus inviting more reprisals, leading to a further flow of refugees to Bangladesh and India. The instability in the region would be enhanced, opening up opportunities for the LeT to exploit.

Pakistan has all along tried to internationalise the Rohingya issue, simultaneous with establishing a firm base for operations by Pakistan-based terrorist groups like the LeT and Jaish-e-Muhammad. It has also drawn the OIC into the issue, thereby projecting itself as a proponent of the rights of Muslims everywhere.

Pakistan can use the militant groups in Myanmar to create adverse situations for both Bangladesh and India. Any significant violent reprisal by Myanmar Forces would lead to further refugee deluge in Bangladesh and a trickle into India. Myanmar’s militant outfits also keep the channels open for weapons provided by Pakistanis and the Chinese to Indian insurgent groups operating in its North-eastern states with their bases in Myanmar.