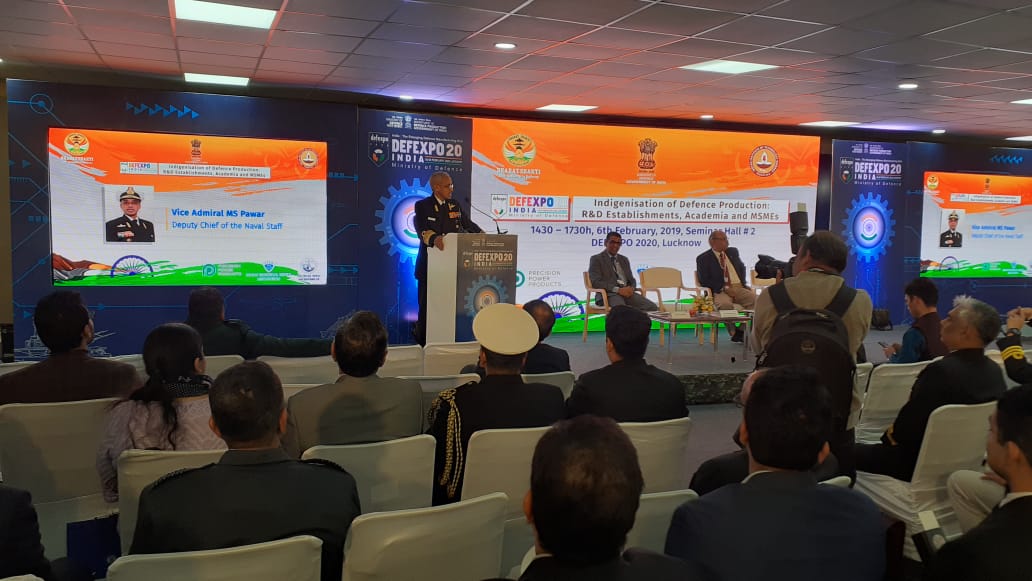 On 6 February, at the Defexpo 2020 in Lucknow, defence digital platform Bharatshakti.in (BSI) conducted a seminar on an issue that’s perhaps right to the fore of our defence modernisation efforts – Indigenisation of our defence inventory. The issue of indigenisation is critical to our force modernisation thrust keeping in view the fact of billions of dollars likely to be spent in the next couple of years, on this account. IIT Madras partnered Bharatshakti.in for staging the event.

The welcome address was delivered by Nitin Gokhale, Founder and Editor-in-Chief, Bharatshkti.in & Strat News Global who defined the broad contours of the government’s thrust on indigenisation being synonymous with force modernisation. Lt Gen PR Shankar (Retd) Professor of Practice, IIT Madras delivered the Opening Address and dwelt upon the issue of harnessing the potential of our institutions of excellence that needs to be dovetailed into our research and technology development endeavours in the defence sector.

Deputy Chief of the Naval Staff (DCNS), Vice Admiral M S Pawar delivered the inaugural address. He highlighted the Navy’s commitment to indigenisation and the requirement of R&D establishments gearing up to provide technological support for user requirements. He explained the steps initiated for a closer user and R&D establishment interaction. The Navy has been pursuing indigenisation most fruitfully for decades, the results of which are quite visible when our shipbuilding and submarine construction capabilities are assessed.

Former Defence Secretary Sanjay Mitra delivered special address where he explained the roles of Chief of Defence Staff (CDS) and commented upon the biggest military reforms in recent times.

The seminar had two technical sessions. The first one was devoted to Synchronising the Academia and Defence Industry relationship. The issue was analysed by two senior professors of IIT Madras to include Prof HSN Murthy and Prof A Ramakrishna.

The Second Technical Session was chaired by Lt Gen Raj Shukla, Director General Perspective Planning of Indian Army who stressed the need for competiveness of Indian MSMEs in terms of value for money.

National Small Industries Corporation (NSIC) Director P Udaykumar explained certain ways that the NSIC has in terms of hand-holding of MSMEs in their growth path.

The industry was represented by Cmdre B B Nagpal (Retd) CMD Goa Shipyard who stressed on the modernisation undertaken by GSL for ship building. Goa Shipyard has a distinction of sticking to its timeline of its deliverables.

Dr S Guruprasad Director General (DG), R&D, DRDO provided the insight into the R&D establishments and the methodology adopted by DRDO in giving technical support to the full spectrum of defence industry. He deliberated on the special focus the DRDO has on Start Ups and MSMEs to strengthen the manufacturing and R&D eco-system.

Air Marshal Sandeep Singh delivered the closing address and reiterated the need for the multifarious agencies in the defence sector to synergise their strengths to indigenise the inventories of the forces.

BharatShakti.in (BSI) is a well-known digital platform that addresses issues concerning the Indian defence industry. The platform’s prime focus remains on the MSMEs which strengthen the defence manufacturing eco-system. The BSI regularly conducts events that bring together policy-makers, military and industry professionals, R&D professionals, representatives of academia under the same roof in pursuance of common goal and objectives to facilitate and an Indian leap in Ministry of Defence’s (MoD) goal for defence production.