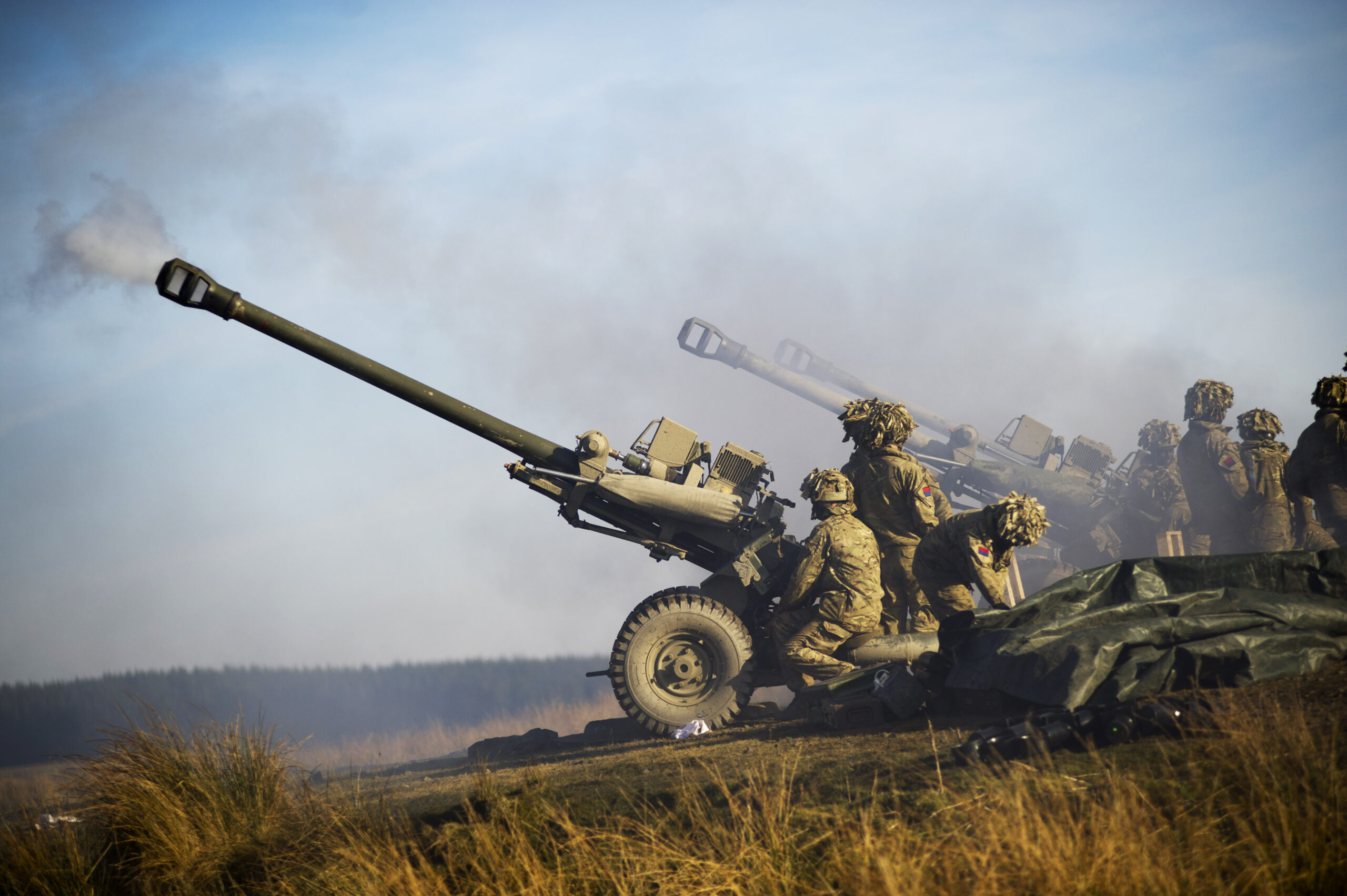 One thing has clearly emerged from the Ukraine war. Terrain, ground, weather, and all other factors might deter, inhibit, or preclude employment of Air, Infantry and Armour but very little deters Artillery. The importance and value of Artillery has been reinforced manifold\d in the Ukraine war. The terrain conditions during the Kargil War in the Himalayas were almost like the muddy ‘Rasputitsa’ conditions in Ukraine.

“It starts with a loud whistle, and you feel something fly past. Then comes the explosion, followed by the blast wave. Last is the shrapnel, which swarms through the air like flies: thpht…thpht…thpht….All you want to do is hide, not breathe, dig deeper in the ground…When a person is shooting at you, you have a clear idea of how to fight back, of where to direct your adrenaline…But when a piece of metal is flying at you, you don’t know where the enemy is and how to survive. I’m a rifleman, I have no weapon to defend myself from that.’” —–This statement could have been that of a Ukrainian in the Donbas region or a translated one of a Pakistani atop Tiger Hill or Tololing in Kargil.

Artillery has held centre stage in the Ukraine War. Both sides have employed artillery imaginatively and with purpose. However, the Russian use of firepower has come to international notice.

The Washington Post has reported that ‘The war has seen relatively few Infantry engagements or tank-on-tank battles; Russia, rather, is concentrating overwhelming Artillery power on relatively small areas to blast its way forward in a path of grave destruction’.

It is also reported that the Russians are firing over 20000 shells a day of all kinds of Artillery including guns, rockets, and missiles. They are outgunning the Ukrainians who can fire only 5-6000 rounds with weapons of shorter ranges. Artillery is winning the war for Russia at this point in time.

Similarly in the period May-July in 1999, Artillery won the war for India by pulverising Pakistani defence to smithereens in Kargil. The Indian Artillery fired over 2,50,000 shells, bombs, and rockets during the Kargil conflict. Most of these were fired in an approximately 10-15 days period of intense fighting. 9,000 shells were fired on Tiger Hill alone when it was regained. During the peak period of assaults, on an average, each artillery battery fired over one round per minute for 17 days continuously. The Pakistanis were simply and overwhelmingly OUTGUNNED!

Such intense firing was seen only after the Second World War. After that war, it is only now in Ukraine that such intense firing is being witnessed. In fact, the Ukraine and Kargil wars bear a similarity of the Gunner stamp on the battlefield.

Everyone says that Russia’s employment of Artillery has re-opened a facet of warfare which has long since been forgotten – that war is a violent endeavour in which victory often goes to the side with Big Guns. It just reinforces what Indian Army did in Kargil long back. This contextual study is important since God and Gunners are often forgotten once the battles are over. In most cases they are remembered only during the next war after shedding unnecessary blood.

Artillery is one of the most important components of Russian Forces. In terms of lethal capabilities, it is Russia’s mission-critical force multiplier. Yet in the initial phases of the Ukrainian war, Russia had forgotten this. It dissipated its Artillery while unfolding its multipronged offensive. It was ineffective. Russian logistics were snarled. Infantry and Mechanised Forces could not operate. They had to withdraw from Kiev.

On the contrary, Ukrainians used their limited Artillery imaginatively. They resorted to Artillery based ‘fire ambushes’ and carried out effective ‘track and kill’ operations. Having learnt a lesson, Russia went back to its trusted Artillery, during its offensive in Donbas. It concentrated Artillery and is bringing down devastating massed firepower on the Ukrainians. Slowly but surely, it is overpowering Ukraine.

Similarly, in 1999, India had forgotten its Artillery having been fed on a diet of excessive counter-insurgency operations. It was the Pakistanis who used their Artillery boldly in the initial stages of the war. They brought up vintage pieces like the 5.5-inch guns into high altitudes and effectively used infiltrators as trans-border OPs to interdict NH 1A and destroy the Kargil Ammunition dump. It was when we were rudely shocked by what had happened, that we brought Artillery into the battle in a meaningful manner.

As per a Pakistani account “India used frontal assaults supported by limited Artillery in the first weeks of the conflict. After suffering heavy casualties with little success, it took several weeks to build up the troops and equipment needed to launch an effective counterattack. The Indian Army began its offensive in the first week of June and, using high volumes of Artillery fire and supported by Indian Air Force strikes, Indian army troops recaptured the heights in the Drass and Kargil area’”

That says it all. Artillery is one of the most important components of warfare through the ages. One should never forget that. However, it is funny that most military professionals develop amnesia between wars.

Let us turn to the terrain. The Ukraine war commenced at a time of ‘Rasputitsa’ or the mud thaw due to melting snows. At this time the flat terrain was slushy. Cross-country movement was virtually impossible. Most movements were confined to roads and tracks. Infantry and Armour could not be deployed over wide frontages to conduct manoeuvres. To date, the employment and operational effectiveness of Armour and Infantry have been grossly restricted in this war. However, employment of Artillery (guns, rockets, missiles – guided, cruise and hypersonic) has been unrestricted. One thing has clearly emerged from this war. Terrain, ground, weather, and all other factors might deter, inhibit, or preclude employment of Air, Infantry and Armour but very little deters Artillery. The importance and value of Artillery has been reinforced manifold in the Ukraine war.

The terrain conditions during the Kargil War in the Himalayas were almost similar to the ‘Rasputitsa’ conditions in Ukraine. The movement was restricted to the limited roads. The move of the Infantry was severely limited due to the barren high-altitude terrain. Employment of Air was restricted by fickle Himalayan weather, political issues, and reasonably effective air defences of the Pakistanis. The Kargil battles were largely fought by Infantry and Artillery. Hence the value of firepower increased manifold. It became the battle-defining and winning factor.

Lieutenant General H M Khanna, PVSM, AVSM, ADC, then GOC-in-C, Northern Command commented at that time ‘Operation Vijay has once again demonstrated that when the Artillery and Infantry operate in synergy, nothing can withstand their onslaught. Pak misadventure in Kargil has not only been defeated, but crushed militarily, diplomatically, and politically; singularly on account of accurate and timely delivery of TNT and lead on his head by the Artillery, suitably exploited by the brave Infantrymen. The Regiment of Artillery was able to amass – a large number of fire units in record time over extremely difficult terrain. High altitude and inclement weather, notwithstanding, the Gunners rose to the occasion and provided extremely intimate and accurate fire support, wherever and whenever required by the Infantry’.

In comparison to Ukraine, the enormity of what was achieved in Kargil is not even understood by many. Under hostile conditions, at high altitudes, on treacherous one-way roads and tracks, the Indian Army concentrated more than twenty Artillery regiments of 105mm Guns, 155mm Bofors, 120mm mortars and Grad BM21s. These were deployed in various sectors in the Kargil war theatre under direct enemy observation and fire.

This ‘in the face’ deployment was unconventional due to terrain and the limited gun areas available. Dummy gun positions were prepared. Ammunition stocks were steadily built up. In an era where there were no drones or satellites, young Forward Observation Officers, and battery commanders fought shoulder to shoulder with the Infantry in all assaults. They brought down sustained and accurately overwhelming Artillery fire on relatively small areas atop precipitous slopes to blast the Pakistanis into grave destruction.

Firing by guns in the steep Himalayan slopes was so accurate that the Infantry would at times call for artillery fire up to as close as 40m, far lesser than acceptable safety distances. Slight errors could have decimated own troops. 100-120 guns were, at times fired in concert. Direct shooting, particularly by the Bofors, spread terror amongst the Pakistanis and had a devastating effect on the destruction of enemy bunkers. It also meant a considerable saving of ammunition as compared to indirect firing of guns, since almost every round fired was a hit. This also contributed to significantly reducing the logistic load in mountains. Firing over a hundred guns on a restricted target was like ‘cracking a nut with a sledgehammer.’

But it is a good innovation to adopt whenever possible to save valuable lives of one’s troops while making the enemy cry out “Uncle” – as extracted from Maj Gen Jagjit Singh’s account. All this is much beyond the way it is being reported of Russian Artillery in Ukraine now.

The most important and differentiating aspect of the employment of Artillery between Ukraine and Kargil is surprised. Everyone was surprised that Russia did not use Artillery offensively in the initial phases of the Ukrainian war. The overwhelming use of Artillery in its Donbas offensive was expected as inevitable. In Kargil, Pakistan did not even imagine that Artillery could be deployed at such scale and much less used the way it was in High altitudes. India’s employment of mass artillery in a destructive role and especially the destruction wreaked by the Bofors was a strategic and tactical surprise for them. It swept them away completely.

The Ukraine war will be analysed minutely by the Chinese. They will go into detail about the way Russia and Ukraine have employed Artillery, among other things. China also lays great emphasis on firepower and the employment of rockets and missiles. It also lays a lot of emphasis on fighting wars under conditions of informatisation using precision strike capabilities to paralyse enemy operational systems as part of their system destruction warfare. Hence imbibing lessons from this war and adapting to a future scenario in the Himalayas will be a high priority for them.

India has the additional experience of fighting and winning a war in the high altitudes of Kargil. Whatever happened in Kargil is a deeply embedded experience which will not go away even if those who fought there have retired. They have handed over a tradition to those who man the defences of the nation today. However, with all such things, memories fade with time and are replaced often by tales. It’s in this context that we must repetitively go over what the Indian Army and its Artillery did in Kargil. We must add this experience to the study which we must carry out in detail on the use of Russian Artillery in Ukraine. A synthesis of the two will tell us how to shape our forces in the future to defeat our adversaries even if they are numerically superior in wherewithal. We have the experience, and they have the theory. Let us make it count.