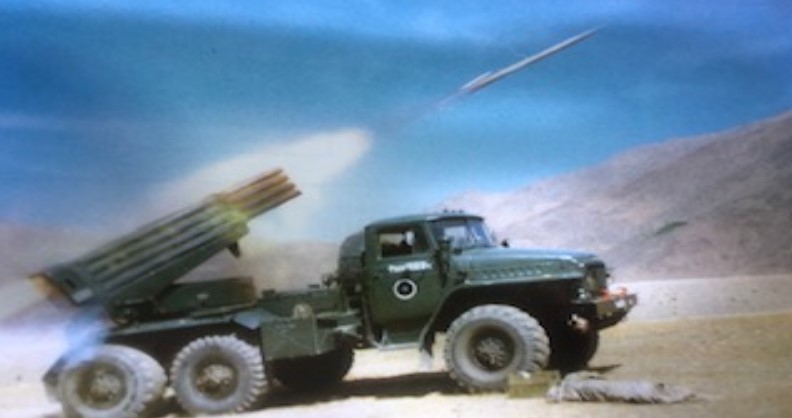 This narrative describes the high-intensity artillery engagement and destruction of enemy-occupied post – Jubar Hill in the Batalik Subsector during the Kargil War of 1999. A massive fire assault was undertaken by a Troop of 122mm Multi Barrel Rocket Launchers (MBRL) of the 212 Rocket Regiment. The operation was launched on the night of 5th /6th July 1999. The author was commanding these rocket launchers and shares his experience planning and executing the fire assault. The 122mm MBRL has 40 barrels on each launcher. A Troop of launchers has three MBRLs.

It was twilight sometime at the end of June 1999 in the battle zone Dras Sector. The mammoth feature Tololing, overlooking the National Highway from Srinagar to Leh, earlier usurped by Pakistani infiltrators, had just been reclaimed by Indian forces, albeit at a high cost of blood/lives. The next phase of the battle was being planned.

As Battery Commander of a 122 mm Russian Multi Barrel Rocket Launcher System MBRL GRAD BM 21, I moved my force from Delhi to the battle zone around May end of 1999 (approximately 1000 km) and inducted the battery in battle seamlessly.

The MBRL systems, though inducted in the Indian Artillery post-1971, were combat validated in operations by the 2122 Rocket battery in the Kargil War. Through the bedlam and melee of offensives, the subunit (as a part of the 212 Rocket Regiment) fired deadly salvos to empower the Infantry at Drass/Kargil/ Mushkoh/Batalik sectors and aided the process of reclaiming Indian posts that the Pakistanis had stealthily occupied.

Between 2 June 1999 and 19 July 1999, my force fired over 2450 rockets. What made the rocket subunit the apple of the eye was its ability to create and deliver a shock wave on the enemy, not only quadrupling our troops’ morale but shattering the enemy’s resolve and overwhelming him with mortal and crippling fear.

The rocket launch system’s six Ural trucks (prime movers) were stoic, lithe predator beasts. They would swallow potholes/craters/tracks and climb gradients up to 38 degrees with absolute ease, even when moving armed and loaded. Their potent V8 aluminium 93MT petrol engines leisurely churned a herculean torque at low revolutions converting them to wild tomcats leaping in and out of firing positions with the ease of a sports car.

Mobility, firing, loading, and redeploying in extremely telescoped timings enabled us to spew heavy quantum of ammunition onto multiple targets in minimal timeframes creating new parameters. On occasion, four targets were engaged simultaneously by splitting the troops to fire from multiple roving positions.

We were literally the proverbial Horsemen of the Apocalypse!

While at Drass, on the night of 3 July 1999, I received orders to re-deploy one troop to provide firepower to 1 Bihar tasked to reclaim Jubar Hill. The Hotel Hour was barely 46 hours away. Hotel Hour (H Hour is the instant when an attack is launched.

The move from Drass to Kargil Fire Control Centre (H minus 44) From our hide location at Drass, Kargil zero point was about 70 odd km. Within two hours after receiving orders, we moved in pitch darkness with three loaded launchers and an additional 240 rockets in five logistics vehicles.

Minimum essentials, such as line cable, field telephone exchange, batteries for radio sets, booster antennae, generators, spare fuel, and a small cookhouse detachment for the 40 odds of us, were carried in three trucks. We were a convoy of nine vehicles, including my Jonga.

It took a treacherous nine hours to cover the distance through random shelling, potholes/broken patches, and remnants of a highway in the darkness with heavy traffic from the opposite end.

Three hours after the first light on a subsequent day, over a cup of black tea, the Artillery Brigade Commander of 3 Division gave me these directions – “Peter, do me a favour, please! Just shell the daylights out of the enemy sitting on Jubar”.

Our salvos were not to be part of the conventional Fire Plan but to be delivered at a slotted time (three salvos of 40 rockets from three launchers – total 360 rockets, a payload of 13.8 tons of high explosive and molten metal, and shrapnel on the Jubar feature) 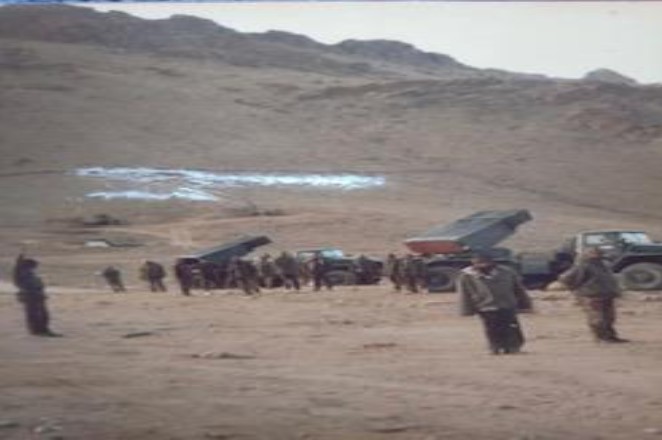 The nearest suitable gun area for deployment/engagement was 29 km away at Hamotingla Pass, located at about 14000 feet AMSL (Above Mean Sea Level). The Staff officers at Brigade Headquarters further briefed me on enemy dispositions, deployments/artillery concentrations/fire arcs and ranges/safety traces for my troops/FLOT (Forward Line of Own Troops), logistics, medical facilities etc.

The excitement grew real and palpable. Word had already reached the Sector about the ferocity and havoc created by the rocket battery in the 8 Division Sector in earlier battles. Own Signal detachments monitoring enemy communications picked up the enemy’s tense excerpts on the radio, fearing the rocket attacks.

After Last Light (sunset) that evening, we moved towards the area of intended deployment. Unlike the previous night’s move, this one was more sinister.  Sudden bursts of shelling, too close for comfort, fell in and around us. However, the drivers steered through pitch darkness, calm and nimble. By first light on 5 June 1999, we arrived at the Pass. It’s pertinent to mention that there were two medium guns also deployed at Hamotingla onto one flank, ex 286 Medium Regiment, with Captain Karnik as their Skipper. Their team helped us load the launchers – without their support, the time between engagements would have increased.

The Preparation (H hour minus 13)

The flat plinths on Hamotingla Pass were a Gun Position Officer’s (GPO) delight. It was as if nature had created plinths for positioning our launchers.

One major challenge was that technical range tables were factored up to 10000 feet. At the same time, we were deployed at 14000 feet- (not a stumbling block for my technical staff, which offset the variables by brilliant extrapolation). We worked out the Corrector of the Moment (offsets for weather inconsistencies to improve engagement accuracy) by the rough and ready method as Meteorological Data was unavailable.

The targets on Jubar were enemy-defended positions (bunkers) on ridge lines and possible approaches. Visual observation for me was difficult as the observer to target distance from my location to Jubar was about 11 km. Luckily, the forenoon sun was behind me, and my skills acquired as an Air Observation Pilot came to my aid. The sector anchor OP (Observation Post), who was close to the target, also synchronised with me on the radio as I engaged in acquiring/cross-checking my fix. The anchor OP also observed the shot’s fall and aided me with corrections to ensure maximum accuracy. We were to pound the general area and not get onto specific or precision shooting. That a business best left to guns rather than rockets.

Having done my last-minute rechecks on the technical work, we opted for brake rings on rockets for the tighter concentration of fire on the target.  Fuses were mix-matched for instantaneous bursting, delayed and short delay activation. Tube lock assemblies of all 120 tubes of the three launchers were calibrated to be within limits of 600/800 plus kg/cm2 release pressure so that the ranges would be almost dead-on accurate and the fall of shot concentrated.

The Dance of the Horsemen of the Apocalypse (H minus 01)

The time of reckoning arrived, 120 Rockets were loaded onto the three launchers, and 176 were prepared and ready in the ammunition carriers. 120 rockets on automatic mode meant 5.4 tons of ammunition pounding Jubar within twenty seconds. 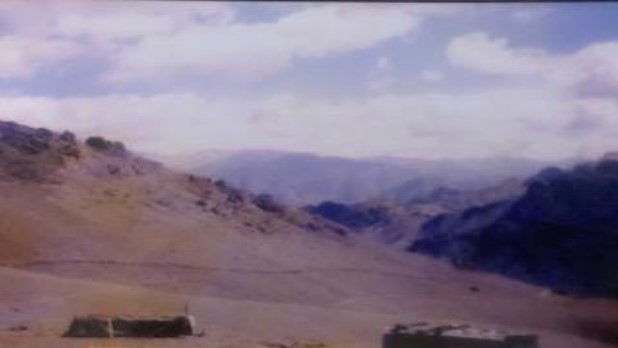 At the farthest ridge is Jubar: The venue of the Dance of the Horsemen of the Apocalypse.

The dance of the proverbial Horsemen of the Apocalypses at Jubar had begun.

The memory of the signal communication made by me before I unleashed the Dance of the Apocalypse is now a part of my core DNA.

One hundred twenty rockets left their tubes at 2520 kmph (a speed of over 2 Mach), blazing, leaving a trail of 120 streaks of fire behind for a thousand meters in the powered phase of flight. After the powered phase, they dropped to about 1500 kmph, stabilising themselves on their explosive journey all the way to Jubar Hill.

Ten seconds later, 120 rockets, near unison, ripped through the bowels of the enemy, detonating, exploding, tearing, maiming, burning, and shredding the enemy or whatever was left of him. Other mighty guns had already played merry hell.

We reloaded and repeated the salvo after 55 minutes—another 5.5 tons, followed by 56 more. The rocket tube paint caught fire. All the launchers were smoked black but victorious.

Tired, worn out, and jubilant, I violated good order and military discipline by sharing a small Rum Toast with Subedar Arjan Singh and Nb Subedar Datta – Senior JCO and GPO. Without them, I could not have done this Mission Impossible.

No doubt the Gunners’ beret badge has the inscription: “Sarvatra Izzat- O –Iqbal” (Omnipresence with Honour and Glory).

Lt Col Sada Peter, a second-generation officer was commissioned in 212 Rocket Regiment in 1989. He has served with Army aviation, held staff appointments in Brigade HQs and Army Headquarters and opted for Premature Retirement (PMR) in 2010 after which he had successful stints with Jet Airways and Tech Mahindra Foundation. He is presently the Head of Security/Emergency Response with Ashok Leyland at Chennai.