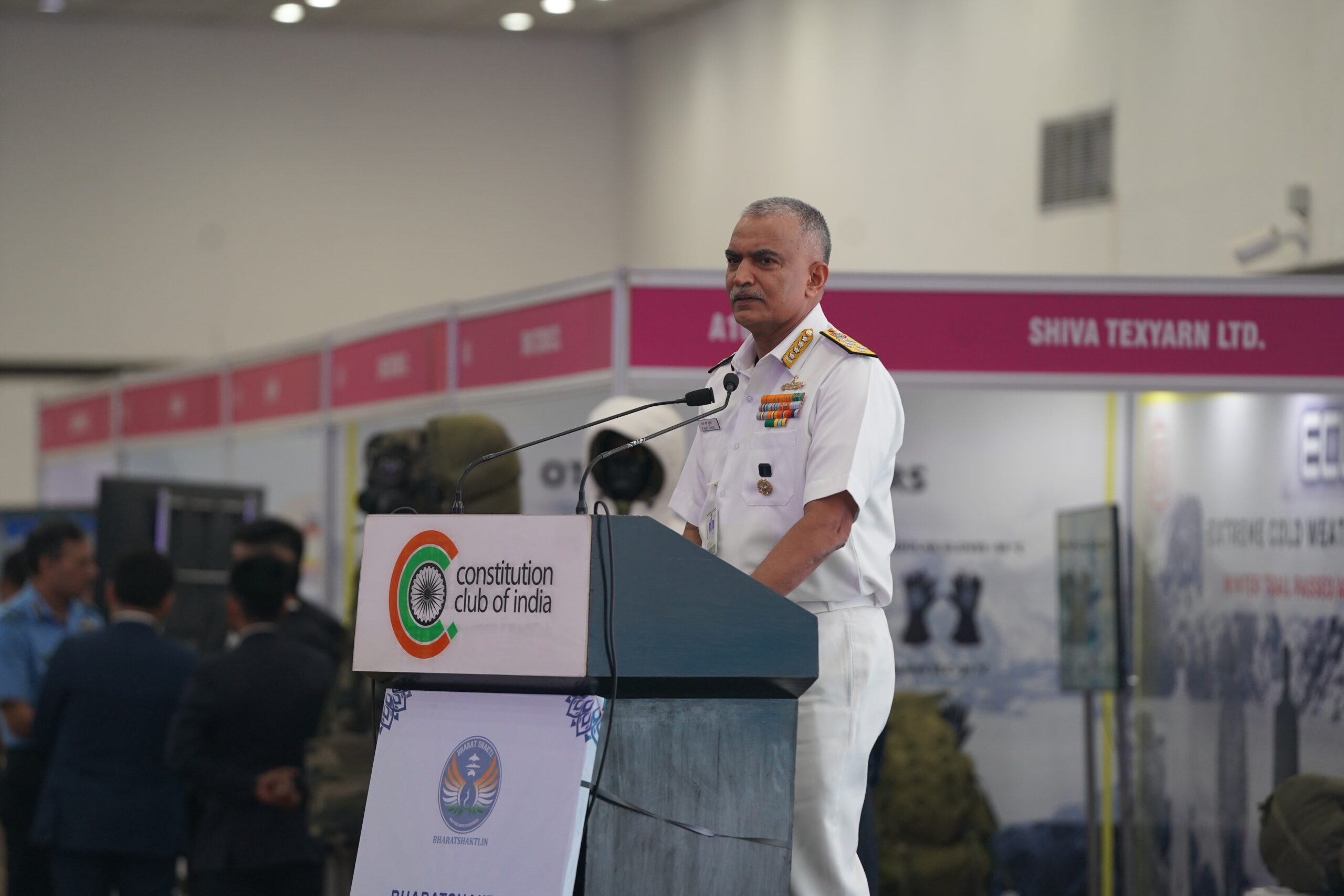 Indian Navy To Be Fully Atmanirbhar By 2047: Navy Chief

Admiral Hari Kumar, Chief of Naval Staff (CNS), opened his talk by stating, “While traversing from a contested present to an uncertain future, collaboration has to be the defining principle for India and the world”. He was speaking at ‘Bharatshakti. in’ the annual marquee event, the India Defence Conclave 2022 (IDC), on 20th September in New Delhi. The IDC witnessed the attendance of all three Services Chiefs, Military Advisor to NSCS, industry doyens including Baba Kalyani and JD Patil, over 70 foreign defence attaches (DA) posted in India and diplomats, and a host of senior military and industry professionals.

The Navy Chief stated that the seas are a global common and shared heritage. Seas have fostered working together by nations. They provide the best examples of countries coming together in a collaborative spirit. For a sailor, it’s not rare to stand on the deck and watch merchant shipping go past. These ships are manufactured in a particular country, fly under another country’s flag, take their loads from one or more countries, are bound for ports in multiple countries, and are manned by a crew from various sovereign nations.

The Naval Chief felt contemporary security challenges are characterised by their ubiquity and reach. “Moreover, they have transcended traditional domains to now straddle a complex web of states, non-states, private actors, as well as diverse technical capabilities and contestations making defence of our respective national interests equally complex,” he observed.

Overall, the threat spectrum has expanded with new domains being exploited. The Navy Chief felt there were two imperatives to be addressed. “Internally, the national security enterprise has necessarily to be not just a whole of nation approach but a whole of society approach, including contribution from the industry,” Admiral said.

Navy Chief also detailed the external imperative: “like-minded nations must strengthen cooperation and collaborate where feasible to improve respective capacities and capabilities.” Hence, synergy among nations is most pertinent.

For cooperative collaboration between nations, trust is most important. It serves as the central pillar. Our approach as a nation is underpinned by the five ‘Ss’ that define our approach. These are ‘Samwaad’ (dialogue), ‘Sahyog’ (cooperation), ‘Shanti’ (peace) and ‘Samridhi’ (prosperity).

Our COVID response is an example of building trust, respect, and reassurance. Our extensive outreach in terms of vaccines, medicines, protective clothing etc. Our friends in the region reciprocated by sharing their resources, including liquid Oxygen, when we needed help. As far as the Navy is concerned, it’s collaborating and cooperating with our regional partners to ensure a rules-based order. The Navy wishes to enhance such cooperation.

Our domestic defence production is rising phenomenally. We have enough potential to join hands together and enhance regional stability. Cutting-edge Indian products might find applicability in the region.

The Admiral was asked to evaluate the Indian Navy’s growth against the backdrop of the Chinese Navy. The Navy Chief maintained that the right way to take on such an exercise was to see our national interests and arrive at the means required to achieve them.

In terms of the production of ships, the Navy embarked on indigenisation in 1961 when INS Ajay, the first Patrol Boat, was made in India. Our capabilities have increased multiple times since then. We have built corvettes, frigates, destroyers, landing ships and an aircraft carrier now. The Carrier is world-class, and it has led to a large number of Indian OEMs (original equipment manufacturers), MSMEs and ancillary units gaining tremendous expertise.

The issue of aircraft on board the Aircraft Carrier came up for discussion. The Navy Chief apprised the gathering that he had promised the Prime Minister that the Navy would be 100% Atmanirbhar (self-reliant) by 2047.

Currently, the Navy is pushing for the twin-engine deck-based fighter. Till then, MiG 29K will be the choice. There may be a gap with MiG 29s not being available. The stop-gap arrangement is Rafale or F18s. Trials have been completed, and the results are awaited. The twin engine’s timeline is 2026, at least the prototype.
The Admiral addressed the issue of a third aircraft carrier. The first requirement is to get the 2nd Carrier operational and, after that, examine the issue. There is also a need to take stock of unmanned systems, UCAV, and a holistic need for another aircraft carrier. How far can manned-unmanned teaming take us? Do we need a third carrier? What type of carrier and ships?

The other issue is that establishments like the Cochin Shipyard have garnered much expertise. The payoffs need to be retained and enhanced. Is it possible for them to build a carrier for another country?

The Ukraine conflict has also thrown up many lessons. The utilisation of new technologies, fibre, precision, ammunition, supply chain management, blockade, the need for Atmanibharta, inter-dependencies, social media use, weaponisation of the cognitive domain and the like market to be evaluated.

Regarding problems faced by the Navy on account of the war, there are no problems as of date. The Navy has taken steps to get assistance from the Indian industry.