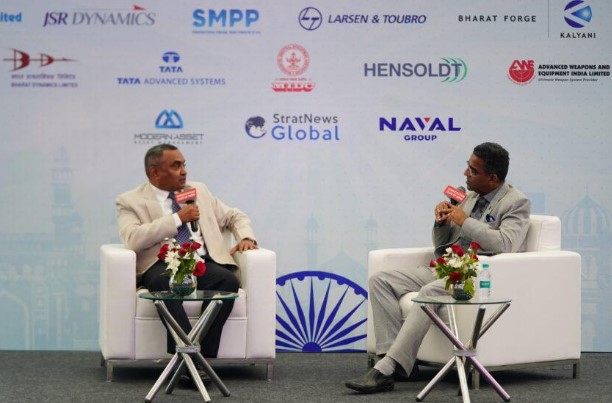 Charting out a road map for the Indian Army, Chief of the Army Staff (COAS), General Manoj Pande, said Atmanirbharta (self-reliance) is a major component of modernisation efforts at the Indian Defence Conclave (IDC) held on 20th September in New Delhi.

Interacting with the organiser of the IDC event, Nitin A Gokhale, Founder and Editor-in-Chief of BharaShakti.in, the Army Chief stated that the Indian Army is moving from a manpower-intensive Army to a more modern, technologically driven, atmanirbhar (self-reliant) and a more agile, future-ready fighting force so that India would be able to meet the challenges across the entire spectrum of conflict in the future.

Elaborating on the focus areas of modernisation plans he said, “first, we are looking at the lethality of artillery systems, be it tanks, how to go in for more precision strike in terms of accuracy, range as well as the volume of fire. Secondly, the protection and mobility and upgrading of the tank fleet. We are also looking at our infantry personnel carrier fleet. The third is in terms of ISR (Intelligence, surveillance, and reconnaissance), where our drones and the counter-drone technology focus. Fourth is how to empower the infantry soldier, and that is where we are looking at an integrated system where he has better protection, he’s got better situational awareness, he’s able to communicate better as part of a squad or a platoon, he’s got a better individual weapon and the like. And then there are other developments in terms of software-defined radios in the communication field as well as in aviation we’re looking at light combat helicopters, more potent platforms and lighter munitions are some of these areas we are focusing on”

Maintaining a High Level of Operational Preparedness at All Times

Speaking on the key lessons learnt from the standoff with China in eastern Ladakh, Gen Pande said there is a need to always maintain a higher level of operational preparedness, infrastructure development, infusion of technology, enhancing capability and quick mobilisation of troops.
“If I were to mention a couple of issues, the first and foremost would be to maintain a higher level of operational preparedness at all times, whatever will be the situation. Second, the importance of infrastructure development, especially along our northern borders and when I mention northern borders, I am referring to areas in Arunachal Pradesh, the eastern side, besides Ladakh”.

He added, “we also realised that there is adequate scope for Infusion of new technology, and that is something which we need to leverage to enhance our ability to address challenges in the future. Fourth is that we need to develop our grey zone capabilities; we need to have a strategy to effectively operate in the grey zone and build our capabilities in terms of what you require to operate in the grey zone. And the last one is our ability to mobilise troops, which relates to the first point in which I had mentioned that we need to maintain very high levels of operational preparedness”.

On grey zone challenges, the Army Chief observed that the Army is leveraging niche technologies towards “capability development” and mentioned three to four artificial intelligence-based projects, such as interpretation of satellite imageries and consolidation of all surveillance and reconnaissance inputs, that are under consideration. Grey zone warfare involves exploiting the operational environment between peace and war to change the status quo or coerce an adversary. China has mastered this art over the years with its salami-slicing and other tactics.

Gen Pande also stated that since May 2020, a significant amount of infrastructure enhancement has taken place, especially in Eastern Ladakh. Sharing details, he pointed out, among others, that the Army was “able to create habitat for close to 35,000 troops” and made covered garages for 450 tanks and 150 artillery systems which he described as “some of the landmark achievements in a short span of two years”.

“To be able to protect ourselves, protect our assets against artillery fire, we have gone in a major way to have underground storage infrastructure both for ammunition and certain other logistics,” he added further on infrastructural development.

He accepted that “there are lots to be desired to be done in the eastern sector”, and for that, he identified forward connectivity as one of the key issues to improve and broaden roads and building bridges for carrying heavy loads and linking valleys for reaching till LAC in Arunachal Pradesh. He also talked about improvement in aviation infrastructure and informed the gathering that helipads are being constructed in the forward areas for strategic and tactical airlifts.

Making a statement on the disengagement at the Line of Actual Control (LAC), Gen Manoj Pande said while progress has been made in troops disengagement in some areas of eastern Ladakh, including Patrolling Point (PP)-15 in the Gogra Hot Springs areas earlier this month, two more friction points remained to be defused through military-diplomatic dialogues for overall de-escalation to follow.

“While we have made progress in terms of disengagement from friction points that you just mentioned, we still have two friction points where we need to move forward, and as we move forward by talking both at the military and at the diplomatic levels, I’m sure we’ll be able to find a resolution towards these two friction points. Our immediate aim is to disengage from these friction points before we look at the next step of, perhaps, de-escalation,” he stated.
The live issues are about the crucial face-offs at the strategically located Depsang Plains and Demchok. De-escalation will involve China and India moving back their 60,000 troops each deployed along eastern Ladakh.

Here is the web link of the transcript of the entire interview: https://stratnewsglobal.com/india/need-to-develop-grey-zone-capabilities-army-chief/