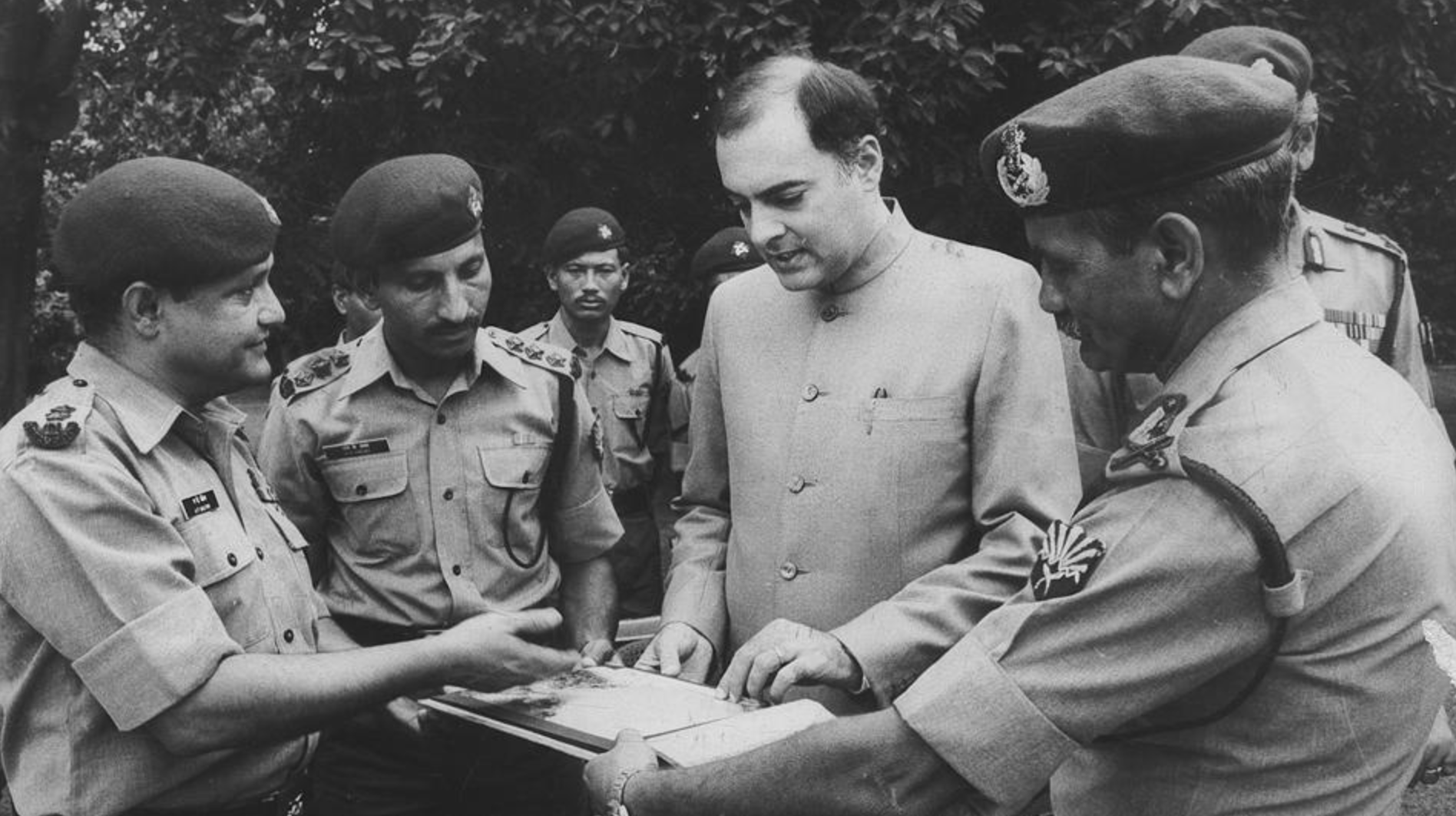 The lessons of Indian Peace Keeping Force (IPKF) operations in Sri Lanka need to be studied in detail by military and foreign policy exponents to benefit from a foray that was far short of victory at the end of the day. However, accounts of the operations remain classified, denying professionals an opportunity to study the issues concerned since those situations will resurface should we have to undertake force projection, someday.
The author, a veteran of the operations, provides an intimate account. Bharatshakti will run his exhaustive narrative in three parts, with this being Part 1.

Why Did India Go Into Sri Lanka?

It has been over 30 years since the day when the IPKF (Indian Peace Keeping Force) withdrew on 24 March 1990 from Sri Lanka. I had taken over Command of 44 Squadron with its holdings of IL-76 transport aircraft of the Indian Air Force at Agra in September 1987 and within a month we were inducting a staggering number of troops into Jaffna, a northern province of Sri Lanka. The foray could be defined as “an initial attempt, well outside one’s usual area of competence”.

The IPKF was exactly that; completely outside the Indian Army’s area of competence, and worse, with no training for either commanders or staff officers about what to do in such an ill-conceived operation. Bureaucrats, political advisers, interlopers, intelligence magicians, Foreign Service sorcerers, military brass and definitely foreigners too, misled the then Prime Minister Rajiv Gandhi into believing that entering into the Sri Lankan imbroglio would fetch him international glory and win the Tamil Nadu elections for the Congress.

Rajiv was a debutante with zero political acumen or experience, a simple airline pilot, unwittingly propelled into the highest executive office of India. He did not know where to seek advice from nor did he have a Prime Minister’s Check List to refer to. Indira Gandhi did not follow check lists, and Rajiv was forced to seek counselling from wherever he could. Not for an insane moment did anyone think that Indira would be killed, and Rajiv will have to adorn the mantle. He thus could not in any seriousness prepare himself for leadership of Congress and of India too, but got saddled with both.

He had to seek reliable and correct advice. Unfortunately, both evaded him, everyone failed him and through him, failed India. Yet, no questions were ever asked by journalists, legislators, corporate moguls, judicial pontiffs, intelligence gurus, administrators, academics, nor ordinary Indians? It was the silence of the majority.

Do recall that Rajiv had won 404 seats in the 1984 General elections. We all knew that the immense and unexpected victory was solely due to sympathy for Indira, and not any confidence in Rajiv. But the spin-doctors and fake news conjurers convinced India and the world, that there was no leader like Rajiv Gandhi.

Look Who Sent Us In

By the time IPKF withdrew in 1990, we had lost 1200 officers and soldiers. And for what? The aim, if indeed there was one, was never written or espoused by the Defence Secretary who was the single ‘Person-in-Charge’ and responsible for the defence of India. The three Armed Services Chiefs are not responsible for this task according to the Rules of Business of Government of India until 2019 with the appointment of Chief of Defence Staff (CDS), for over seven decades as a republic.

Even the President of India, the Supreme Commander of India’s Armed Forces, did not ever seek to review of this asymmetrical situation. A civil servant with frighteningly limited knowledge and exposure to military matters, was exclusively and solely responsible for the defence of the country from external aggression?

Within ten years of IPKF debacle, we had Kargil. We continue to fight terrorism in Jammu and Kashmir and other areas, tackled by the Armed Forces and Armed Police, but the single hotshot mastermind who is responsible for defense of India is the Defence Secretary. The ‘military-genius’, till the appointment of CDS last year, was our Defence Secretary.

It is such bureaucrats who permitted the IPKF to come into being, indeed with acquiescing from certain military quarters. I have heard many civilian proponents of this misadventure saying that unless India intervenes into affairs of her neighbors, how can we call ourselves a great nation? What greatness did we display? In truth, we demonstrated utter helplessness.

If America had a Vietnam and USSR had an Afghanistan, then most certainly India has had a Sri Lanka. And what a pity that Indian political, military, bureaucratic, diplomatic, economic, intellectual, judicial, academic and corporate leadership learnt nothing from the Vietnam and Afghan tragedies, and collectively permitted the sacrifice of 1200 young boys with nothing to show, except their names etched on stones? How many readers know that Sri Lanka has built a war memorial for the IPKF fallen, but no memorial has been built in India? That sums it up about botched operation, doesn’t it?  Indian blood and guts spilt on Sri Lankan soil for the unity and integrity of Sri Lanka!

Those 1200 who died and the hundreds injured, many crippled for life, did not do it for India. They did it for their paltan (battalion), their regiments, their izzat (honour), certainly not for India. The IPKF was a dismal failure of higher and middle-level military command and a complete politico-diplomatic-intelligence-bureaucratic disaster, ending eventually in the assassination of Rajiv, the man who launched IPKF without knowing what would happen, and how to recall the Force.

Rajiv was completely immobilized when IPKF started losing the battle, and there was no one competent and courageous enough to tell him that we had screwed up. Even the Army was unable to insist on its withdrawal, having promised in the first place to do, what could not have to be done.

Like Ashwathama (great warrior), Rajiv did not have the cognition and ability to recall his ill-conceived Brahmasthra (ultimate weapon), the IPKF. The difference being that, Ashwathama was condemned not to die; Rajiv died. There was no Krishna (God) to keep Rajiv alive. Every one of his cronies betrayed him. Many are alive and thriving- his blood is on their hands. As said uncharitably, while there is at least one Gandhi around, the Congress will find ways of sacrificing that Gandhi, for the political glory of the Party. Tragic!

Study the Campaign and Jointmanship, Why the Hesitation?

Do We Study the Lessons of IPKF Failure?

A number of books have been written on IPKF operation with severe indictments but sadly a very few militaries and our foreign/administrative service training institutes, actually study the IPKF campaign in detail with all its warts, blemishes, dirt, blood, gore, incompetence, hesitations, foolhardiness, staff failures and abandonment?

It is like the battles of 1947/48, 1962, 1965, 1971 and Kargil, barely studied at the institutes. We would study Desert Storm, Operation Barbarossa-the invasion of Russia by Nazi Germany, Battle of Britain, Mesopotamian Campaign in the Middle Eastern theatre of World War I, Battle of the Atlantic, Arab-Israeli Wars, Vietnam War, but never our own battles.

How then will we extract lessons for the Indian military and accept that it was our flawed judgments, and in many cases silence, that convinced Rajiv to launch the IPKF. Concrete examples of our flaws, frailties, blunders, hesitations, misunderstandings, confusions, irrational actions, are lost in the ‘Silence’.

The IPKF operational tales are replete with deafening silence from New Delhi when needed, and unsolicited interference from more than 3500 km away. We cry ourselves hoarse about the still secret Henderson Brooks Report on 1962, and demand it be revealed to the Armed Forces to learn lessons. We have all the details of every battle that IPKF fought, most participants, military and civil, are alive and capable of telling it as it was.

The Armed Forces and Para-Military Police (PMP) have competent officers to draw lessons and yet we hesitate to press ahead and make the critical changes in our training patterns and syllabi to imbibe value from IPKF battles. Why do we do this? The Staff lessons from any campaign are the most vital aspect but we invariably neglect them, terrified that the skeletons which would tumble out would be smeared with failures and affect the reputations of those who negligently misguided Rajiv and sank the IPKF.

Jointmanship: Is There Such A Thing?

The Armed Forces Headquarters, veterans, well-wishers from varied professions, even some bureaucrats, have shown unprecedented solidarity with the serving armed forces officers and the veterans. Regrettably, we have concentrated all our attention to pay, pension, disability, warrant of precedence, weapons and housing with little attention to Joint Training, Joint Planning, Joint Financing, and Sharing of Resources.

The extreme desire to have ‘our very own exclusive administrative assets’ reigns supreme. It has hurt all of us and as can be expected, it gets exploited by non-military, administrative, financial, intelligence, technical, judicial and political forces and who encourage inter-services rivalry, by playing one against the other. It is further acerbated by military officers seeking favors for their advancement. Worse, very senior officers, hiding behind veils of retirement, launch vituperative attacks on the present military leadership for not doing what these retired officers could, and should have done themselves, but did not.

The IPKF debacle followed by the surprise of Kargil and terrorism should have alerted the top military brass to close ranks and present a united impregnable front, not for pay, allowances, pension, weapons, accommodation, and inter-services positioning with bureaucrats, but for Jointmanship. The under emphasised and indeed deliberately ignored need for ages, in areas of Joint Operations, Joint Planning and CDS till very recently. Greater services participation is must for Defence Production, Procurement, Defence Finance, Joint Intelligence Organisations, Joint Military-Diplomatic Organisation, Joint Military – Para-Military Command is what we must attempt to execute.

We have opted out for Theatre Commands now but the IPKF had an Overall Force Commander (OFC). It had all the trappings of integrated joint services, but it failed in operations. To refuse to fearlessly analyse it and remedy the flaws to prepare for the next such operation is unforgivable.

Future generation officers, now at NDA (National Defence Academy), will not excuse us. It is wilful negligence. If there is one concerted action that will rejuvenate the administrative lethargy in MoD (Ministry of Defence) and Defence HQs it’s a conjunctive and united demand for deliberate change over to Jointmanship from NDA to CDS, and within MoD, MHA (Ministry of Home Affairs) and Ministry of Finance. How many more campaigns do we need to fight to get our act together? Even a Cat has only Nine Lives!

Media commentators are extremely quick to lambast military leaders if in their opinion, the military has crossed the statutory Rubicon in commenting on national governance. They all conveniently forget that the military is also an integral part of  governance. Indian military leadership has been and remains intensely disinterested in interfering in political, administrative, judicial, legislative responsibilities of the country. The overwhelming control that the politico-bureaucratic-judicial triumvirate has over India’s Armed Forces and Para-Military Forces is well documented and incontestable. The number of times that these Forces have done the bidding of the triumvirate either singly or jointly is evidence of their unquestionable loyalty and complete distaste for meddling in affairs that are not in their charter.

On the other hand, the readiness with which these Forces have prosecuted war, skirmishes, deep penetration strikes, anti-insurgency operations, civil disobedience management and disaster relief, at the behest of civilian authority, is legendary. They continue to do so even when repeatedly, the civilian authority ditched and abandoned them in their moments of victory and defeat.

(The article is being published in three parts. Part Two will follow in three days)