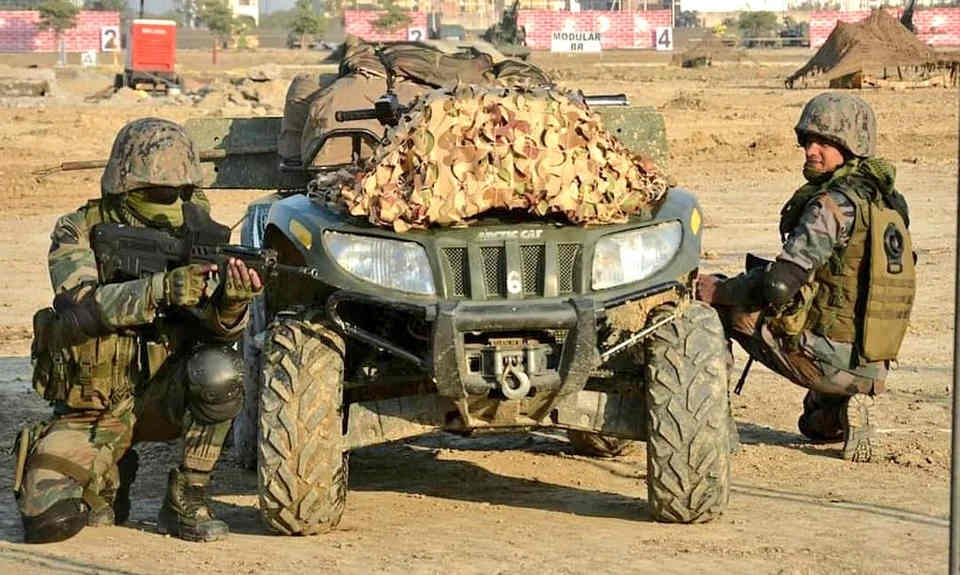 The concept of all-terrain vehicles for greater mobility of the forces has been in play for a considerable period, however, adding the autonomous mode to such a design is more recent. The author informs about the progress in evolving such a vehicle within the framework of Make in India scheme.

Two intrepid Indian Navy veterans are promoting a technology solution possessing the potential to revolutionize logistics and mobility for the military in India.  Presently titled as AI-based Autonomous All-Terrain Vehicle (AATV), it revolves on a single design platform that can be utilized to multiple payload/capabilities without any modification to it due to its unique payload integration technology. It also ensures mission effectiveness and cost-efficiency in terms of maintenance and spare parts management.

The AATV was designed by a European firm for a wide range of civilian use mostly in the agriculture sector and its promoters did not primarily intend it for military usage. It, however, underwent changed due to ruggedness and growing popularity. The AATV has been tested by the British Army in December 2018 and by the US Army under its SMET programme. It is understood that it has met the criteria set by the British Army and the US Army and is also being evaluated by other countries. Further, it has performed creditably, if not better, as compared to other Un–Manned Ground Vehicles (UGV). The EU Firm is now entering India and setting up shop in India to fulfil the Make in India guidelines.

It has a payload capability of 2500 -3000 kg, it can operate in sand, snow and rough rocky terrain and through 50 cm deep water. The other features include long endurance on the ground and can travel up to 150 km without refuelling which can be extended by additional fuel tanks in its diesel variant.

The electric variant can also be introduced depending on the tactical requirements. It can also be airlifted. The multi-purpose quality is enhanced by the ability to attach tooling to the front, rear and top. This has tremendous advantages in different battlefield conditions. Its Unique Selling Point (USP) will be enhanced multifold times once it is enabled by Artificial Intelligence (AI). The Navy veterans are confident that this Multi-Purpose Vehicle (MVP) will operate across all terrains in India and meet the operational requirements of the Indian Army. The AATV can meet the several requirements of the Indian Navy, Indian Air Force and the Coast Guard.

The internal security managers of India who are responsible for safety, security and stability should take notice of this AATV especially the three border guarding forces namely the Border Security Force (BSF), Indo-Tibet Border Police (ITBP) and the SashastraSeemaBal (SSB). The AATV has the capability of enhancing their efficiency and supervision along the international frontiers across several terrains.

It has the ability to improve upon the troops-to-ground ratio giving personnel the greater flexibility in movement. If properly employed, the AATV can fully obviate the need for importing similar foreign vehicles. The other central armed police forces like the Central Industrial Security Force (CSIF), the Assam Rifles (AR) and the Central Reserve Police Force (CRPF) too can make use of this vehicle in their operational deployments. The Railway Protection Force (RPF) and the National Disaster Response Force (NDRF) and possibly the National Security Guard (NSG) can hugely benefit by the AATV.

The promoters have prepared a fact sheet for each of the central armed police forces and law enforcement agencies and also levels of interoperability in a different operational environment. The same applies to state police forces as also for coastal surveillance. This is buttressed by robust research and development facilities and technological innovations.

The beauty of this technology is that it can be harnessed for a diverse variety of Military Operations Other Than War (MOOTW) ranging from support in disaster management, surveillance of oil and gas pipelines, support operations of Unmanned Aerial Vehicles (UAV) to helping farmers in a major way in the agriculture sector. The list is exhaustive.

State governments and Union Territories are first responders to threats to security and safety in their respective jurisdiction. This is articulated by respective state police forces. The AATV is designed to meet the requirements of state police forces especially their elite or special task forces.

The Navy veterans opine that this entire project can be processed under the “Make in India” policy with primary technology that can be imported on Transfer of Technology basis. However, there is the need for its wider dissemination among the various stakeholders in India, both civil and military as also at the level of Centre and State governments. The AATV Video/Features was showcased at the Def-Expoat Lucknow in February 2020 and interestingly attracted a lot of attention.

The AATV is a major innovation which can become a force-multiplier and a game-changer. It will revolutionize military mobility and logistics and provide the cutting edge to our military and security forces. The other area of importance is its tremendous potential for defence exports. Indian industry should not miss the chance to participate in this new development.