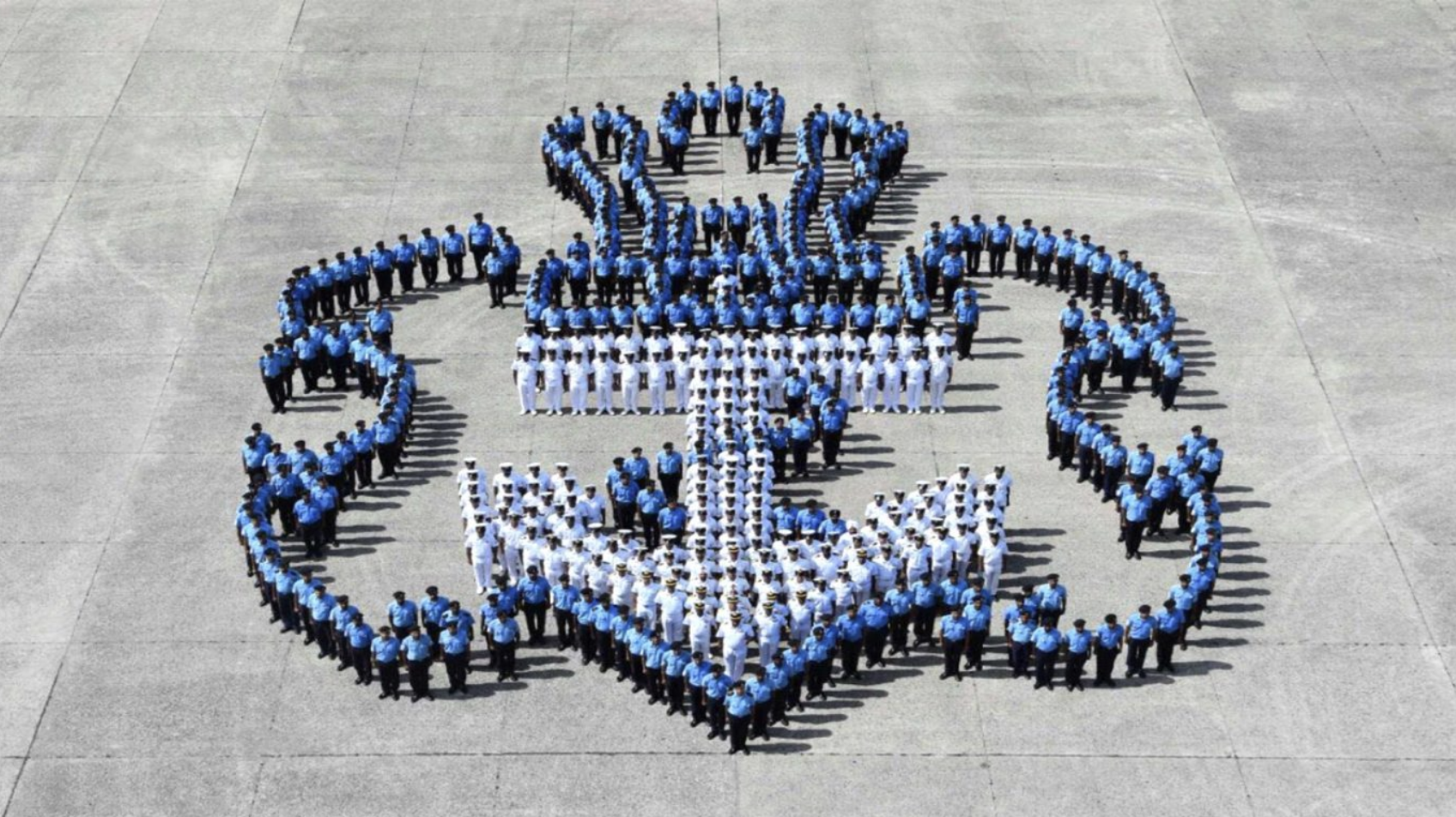 Year 2021 shall be the year of historical transformation for the Indian Navy with the creation of a Maritime Theatre Command (MTC). MTC itself shall be part of a larger restructured Indian Armed Forces to achieve contemporary military capabilities.  The plan was rolled out in early 2020 with the appointment of first Chief of Defence Staff (CDS) to head the newly established DMA (Department of Military Affairs) in the MoD.

The formation of an MTC is part of the recasting of the Indian Armed Forces to create a Theatre level contemporary matrix with the aim to enhance military potency, with Theatre level force allocation. Various inter-service commands and institutions such as the Strategic Forces Command, tri-services Andaman and Nicobar Command and the Integrated Defence Staff (IDS) are already operational as precursors to enhanced Joint Operations.

The standard mission of the Navy is to deploy warfighting units at sea and sustain a combat-ready Naval force capable of establishing sea supremacy for India in its area of interest, while also acting as a deterrent against any hostile aggression. This activity also ensures the availability of the essential freedom of the seas for commercial interests. To achieve this, the Naval forces conduct offensive and defensive operations related to the Maritime Domain Awareness, including maintaining sea control through the use of Surface, Subsurface, Air, Land, Space and Cyberspace assets. Indian Navy’s role includes power projection through sea-based assets flying the Indian Naval ensign in the international waters.

The Navy has an increasingly global strike capability through aircraft carrier(s) and warships, using nuclear and conventional weapons and is capable of carrying out interdiction and interceptions, coastal security and maritime and littoral defence using naval surface and subsurface assets in consort with air support and amphibious ground forces.

Indian Armed Forces Joint Doctrine released in 2017, elaborates various military objectives like preventing war through strategic and conventional deterrence across the full spectrum of military conflict, to defend the nation, its interests and sovereignty.  At the very outset itself, the CDS’ task was to re-structure India’s exiting single-service commands into only five Joint Commands with focus on achieving enhanced operational efficiency. The Maritime Theatre Command is one of the five Theatre level commands to be created for optimizing the resources of land forces, naval units and aviation assets. Similar to MTC, the agenda is also to create Air Defence Theatre Command and three land centric integrated theatre commands.

The Indian navy is presently deployed under three area commands, each headed by a three-star Admiral. Maritime Theatre Command is planned to be implemented in 2021 itself, with no liabilities towards the creation of additional posts or ranks i.e., an organizational structure to be culled out from the existing Command structures of each of the services. Even though the Indian Navy is smaller than the other two services, now with MTC it may have larger assets of airpower and amphibious land forces and shall be the pioneer service to implement the Theatre command concept.

The MTC is to be headquartered at the existing naval base at INS Kadamba, Karwar. Navy always had a long term plan to localise the Western Naval Command assets at the Karwar harbour to reduce load at the congested Mumbai harbour and for strategic reasons. The staffing of MTC, C-in-C HQ at INS Kadamba shall gradually see tri-services components growing. Karwar already has an active Naval ship berthing and repair infrastructure which too shall see exponential growth with the MTC being located there.

The MTC organisation is likely to be distinctive with a Staff HQ and three Operational Commanders heading the combatant units of the Navy, IAF and the Army. The MTC organization shall mainly integrate the warfighting capabilities at sea, air and land on the principles of Netcentric Warfare. Thus, a flexible force structure deployment capability shall be available to India to match the varied geographic areas of operations and the strength employed by the enemy. MTC shall possess service verticals to allow operational execution of tasks to be handled by specialists, themselves.

The Army’s amphibious brigades, which are already based in coastal areas of Port Blair and Thiruvananthapuram shall be deployed in an active role by the Army’s two-star General under the MTC, C-in-C. On the other hand, deployment of IAF units for the maritime cover of MTC using Jaguars based at Jamnagar and Su-30MKIs/Tejas based at Thanjavur shall be the responsibility of an Air Vice Marshal.

The Indian Coast Guard organization and assets would be wholly assimilated under the MTC and shall be playing a crucial role in coastal defence and other Intelligence Surveillance and Reconnaissance (ISR) requirements. The Coast Guard, since inception, always had a close operational association with the Indian Navy even though in the existing structure it is responsible to the MoD directly. Post 26/11 terrorist incident, Indian Navy was designated as the principal authority for complete maritime security of India and the Coast Guard’s operational activities were closely tied to the Indian Navy.

The transformation of the Indian Armed Forces under MTC shall be challenging administratively and technically due to various inherent reasons like methodologies and style of operations of each of the Services. The Theatre Command concept has large deviations from the existing time-tested approach and so, shall have its own challenges, especially when we have ongoing hostilities at the borders. With the formation of CDS and CIDS (Chief of Integrated Defence Staff), many issues regarding the inter-services rivalries are expected to have been addressed.

The re-designation of Roles and Responsibilities and the creation of a functional matrix targeted at achieving the highest military proficiency shall have new measurable parameters in place. Careful implementation of MTC Command and Control structure is desired to preserve the uniqueness of each arm through adequate flexibility to the IAF and Army’s Operational commanders to achieve a common military objective.

Technology as Key to MTC Success

The setting up of MTC for Theatre level operations shall require many technological gaps to be addressed to ensure a seamless flow of combat information amongst the tri-services formations and units within the MTC operational framework. Hence, it may be prudent to look at establishing a technological integration through Inter-operability in line with the concepts of C4I (Command, Control, Communication, Computers and Intelligence). These solutions are required to be designed and developed centrally as per the Net-Centric Warfare logic for modular, scalable, platforms, independent and re-deployable solutions.  India is already a signatory of COMCASA, LEMOA and BECA agreements with the US. These agreements too are required to be catered for across the Indian Armed Forces and a sub-set applied to the MTC also.

A well planned technological implementation of the Theatre Command shall assist in fulfilling the hardware shortcomings of one service with a suitable substitute from another to accomplish an integrated solution. The underlying technological solutions, which usually are designated as background support functions in military planning, are the first required to be deployed across all the five Theatre Commands in the pipeline, starting with MTC. Indian Navy’s Combat Management Systems, which are already a standard fit for all the main battleships, is required to be working collaboratively with IAF and Army units within the MTC. For example, the Indian Navy uses MIL-STD 2525B symbology for display and tracking of all the targets viz. Surface, Sub-surface and Air tracks for target identification. These tracks along with the Threat and Engagement Zones, Missile Attack alerts etc., are shared over an indigenous Tactical Data Link.

Similar methodologies, when implemented by the Army and IAF units too, shall ensure seamless integration to evolve a Common Operational Picture for optimum force deployment to engage rapidly evolving threats. Furthermore, while operating alongside Multinational Task Forces, such a concept shall assist in combat information sharing.

The sharing of ISR information from the Space Command and the Cyber-space organisation shall be valuable inputs required by MTC in today’s evolving hi-tech warfare scenario when time-critical combat data is essential with the adversary possesses high-speed long-range missiles, fighter jets and covert submarines.

With an adversary like China, which has superior military technological manufacturing industry, the economic strength along with an ambition to be a global super-power, India may unwittingly find itself in an arms race, triggering an escalating defence expenditure to keep its armed forces relevant in both the contemporary and futuristic environments. The private Indian defence industry under the Atmanirbhar (self-sufficient) philosophy requires a special impetus to fill the gaps in the Theatre level technological solutions.

Indian Navy with its growing importance on the national stage with its strategic advantage to create deterrence to China through influence over the silk sea-lanes of trade may find the time short to implement and re-align the MTC to the high standards desired. Therefore, it is essential that all the underlying technologies to achieve inter-operability, geo co-ordinate conversions, Common Operational Picture etc., are worked upon by the three services centrally for the MTC, and similar schema is available for replication for the other Theatre Commands in the pipeline. When the solutions for interoperability and inter-changeability amongst all the five Theatre Commands are implemented at this MTC creation stage, a smooth transition at a far lower cost is guaranteed for all the future Theatre Commands.

For the Year 2021, Indian Navy has the task cutout to not only get the Maritime Theatre Command operational but train the crew through drills and Naval exercises.  Simultaneously, it is also to be ensured that an active action against Chinese growing influence in the IOR and Indo-Pacific regions persists, and enhanced collaboration with various multinational task forces is maintained. Achieving all this within a year’s timeframe is no mean task, and requires in-depth technological studies to re-work and digitize the Maritime Theatre Command’s entire spectrum from tactics to doctrines.