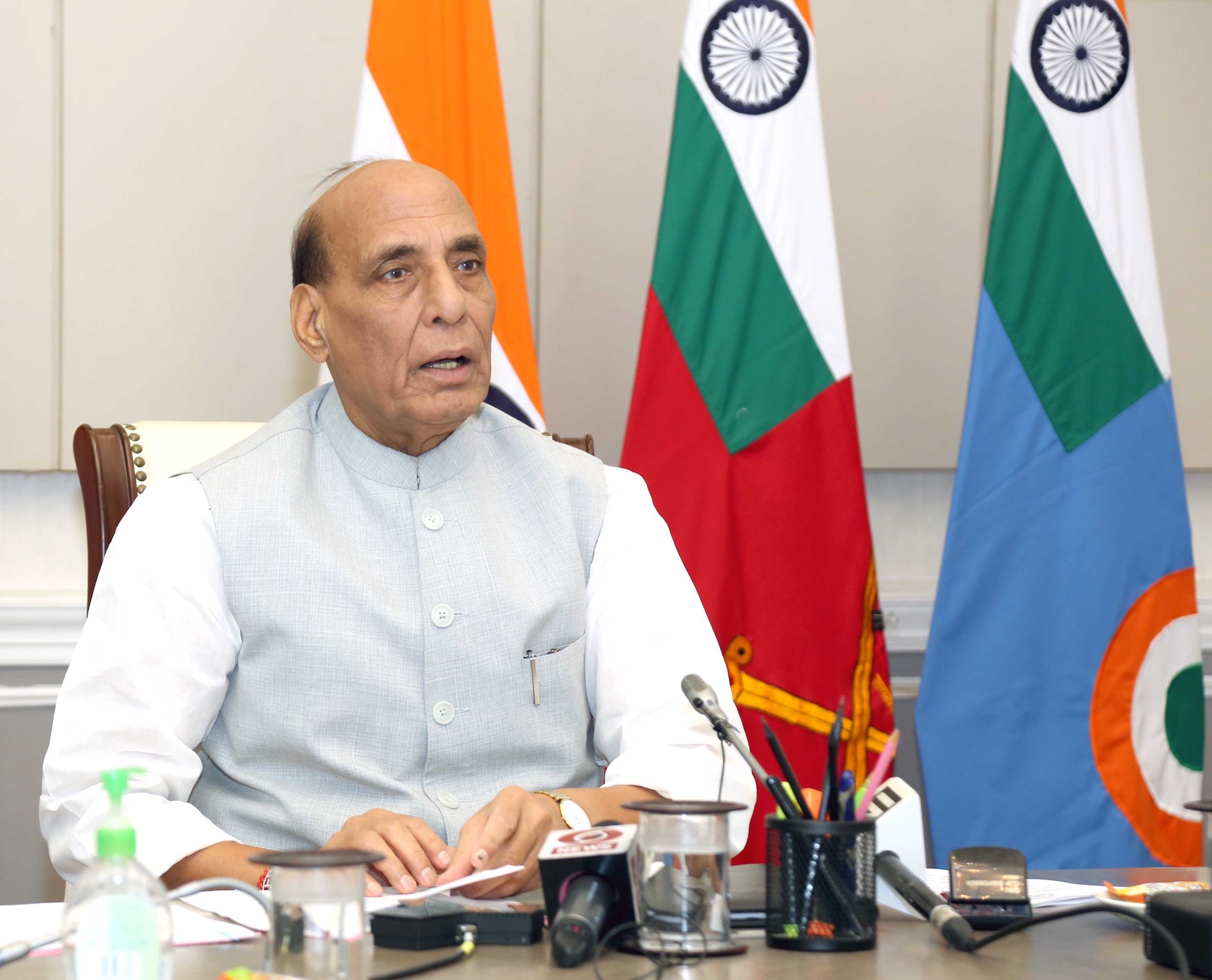 The last few years have witnessed an aggregation of challenges that have impacted global stability. Geopolitical dissonance has been accentuated by the Covid pandemic.  In the Indian case, the LAC with China has been violated at multiple places. Under the circumstances, the Indian Government has applied itself to force modernization by adopting the Atmanirbhar path.

Nitin Gokhale, Editor-in-Chief Bharatshakti.in discussed the more important issues with the Raksha Mantri Shri Rajnath Singh in a free-wheeling discussion on what’s been pursued by the Government during its years in power, as also the path it plans in the days ahead.

Nitin Gokhale: When you took over charge as the Defence Minister in June 2019, your immediate challenge was to get additional funds, and the long-term challenge was to give momentum to the ambitious ‘Make in India’ pitch in defence manufacturing. How has been the journey so far in terms of achieving those goals?

Raksha Mantri Rajnath Singh (RM): The Government has been working in a focused manner to promote Átmanirbharta’ under the ‘Make in India’ programme. Our main objective has been to reduce import dependence for platforms, weapons, components and spares.  After taking charge as the Raksha Mantri,  these objectives have been my top priority and several initiatives have been taken in pursuance.

The Government has also created an atmosphere of jointness to ensure the modernisation of Armed Forces in the rapidly evolving global security scenario. Countries around the world are now focusing on the modernisation of their militaries and the demand for military equipment is rapidly increasing due to emerging security concerns, border disputes and maritime dominance. India is capable of meeting these needs through a cost-effective and quality up-gradation approach.

Further, modernisation, upgradation and sustenance of military equipment and weapons are being progressed to equip the Armed Forces with modern weapon systems/equipment under various procurement provisions (DAP & DPM). Also, in emergencies, special procurement powers to enhance operational capabilities are being given to Service Headquarters. 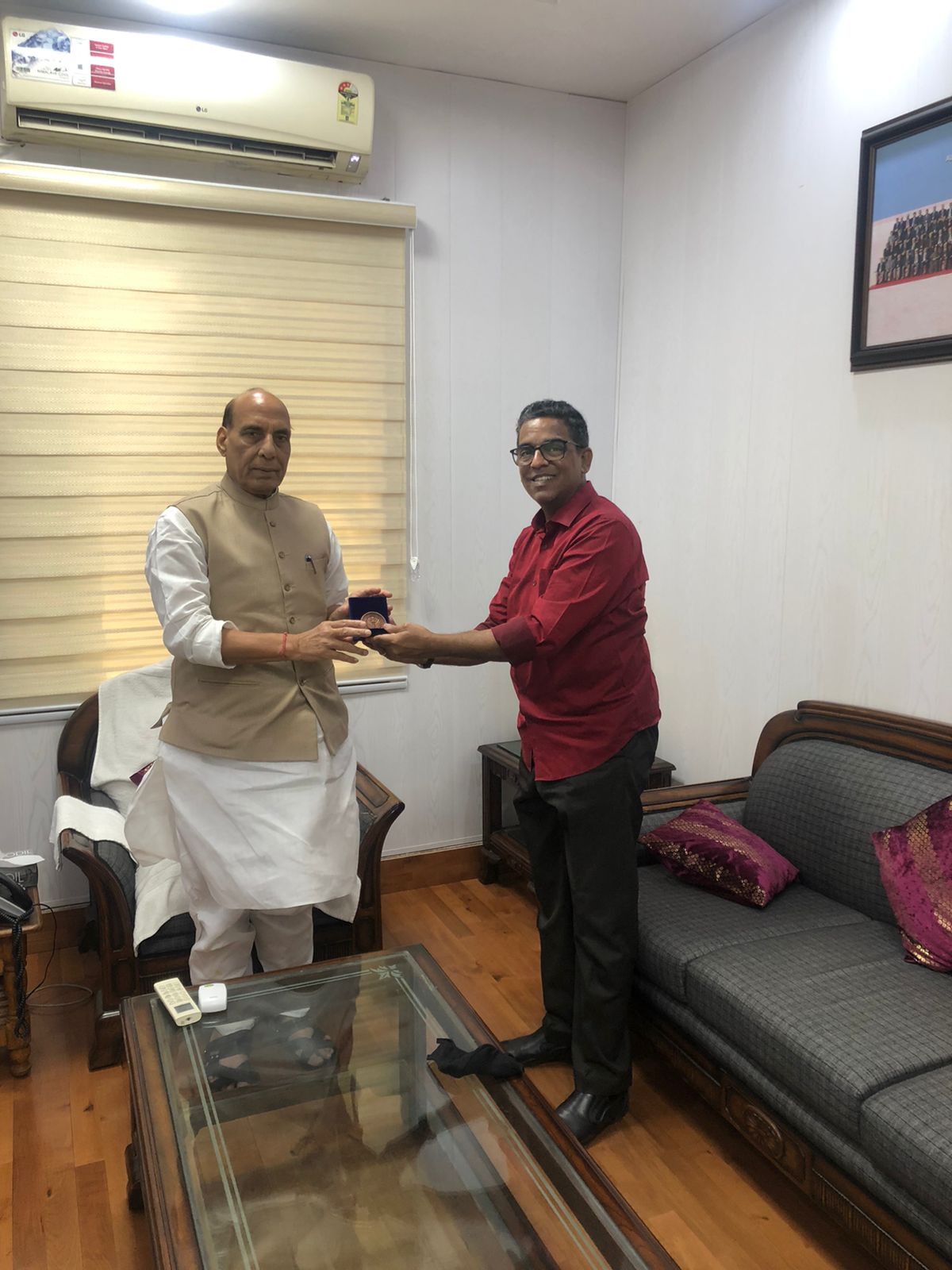 Nitin Gokhale: Dealing with the ongoing border tensions with China at the Line of Actual Control in Ladakh has been the biggest challenge for you. How are you coping with it?

RM: The extraordinary mobilization of troops in our neighbourhood and the completely unprovoked aggression on our northern border since the early summer of 2020 have thrown up several challenges amidst the COVID-19 pandemic. Our armed forces displayed exemplary courage and dedication in dealing with it. The Indian Armed Forces have the capability to give a befitting reply to every challenge thrown at them.

Nitin Gokhale: You proclaimed a number of long-term reforms your Ministry had undertaken in 2020, which like the previous declarations, appear very ambitious?

RM: The reforms undertaken by the Ministry will make India a global powerhouse in the defence sector in the times to come. It envisioned greater cohesion and modernisation of the Armed Forces through policy changes, innovation and digital transformation. These reforms focused on the ‘Aatmanirbhar Bharat’ initiative, increased collaboration with the industry to boost defence exports, measures to accelerate defence acquisitions with greater transparency, digital transformation, strengthening of border infrastructure, transformation in R&D and increased participation of women in Armed Forces. Reforms are progressing well within the stipulated timelines.

The ease of doing business in Defence and Aerospace sector has been a key focus area of the Ministry. Efforts have been made to digitize the processes in order to cut the compliance burden on industry. These initiatives include establishing an online end-to-end Export Authorisation portal for granting export authorisations, issuing Open General Export Licenses and Import Licenses.

An indigenisation portal namely SRIJAN has also been launched to facilitate Private Industry becoming a part of the indigenisation drive. More than 19500 items have been uploaded by DPSUs on the portal for indigenisation by the private industry. The industry has already expressed interest in indigenising 3838 items.

Nitin Gokhale: Do funds for defence modernisation remain an issue?

RM:  Funding does not come in the way of the country’s defence preparedness and there will be no compromise on it. We have taken precautions that there is no shortcoming on the country’s defence preparedness in any way because of budget constraints. Through enhanced budgetary support over the years, the Government has placed modernisation and infrastructure development of the Armed Forces at the core of our National Security and Defence Planning process. In 2019-20, one-third (32.19 per cent) of the total capital expenditure of the central government was spent on defence, which is the highest among all other central ministries.

The Union Budget 2022-23 would give further fillip to ‘Make in India’, boost demand and build capacities for a stronger, prosperous and confident India. The total allocation under Capital Outlay of the Defence Services has been increased from Rs 86,740 crore in 2013-14 to 1.52 lakh crore in 2022-23. There is an enhancement of 76 per cent over a period of nine years. To encourage domestic industry, the capital procurement budget has been enhanced by 10 per cent to 68 per cent, up from 58 per cent in 2021-22. We have also ensured that 25 percent of the indigenous procurement would be from the private companies.

Nitin Gokhale: To what extent India has been able to indigenise the manufacturing of defence equipment?

RM: In order to make India a global defence manufacturing hub, the Government has taken several policy initiatives in the past few years under the ‘Make in India’ programme and brought reforms to encourage indigenous design, development and manufacture of defence equipment in the country, thereby reducing dependency on imports in coming years.

It is my firm belief that Indian MSMEs and Start-ups will have to play a big role if the country has to realise its goal of becoming a world leader in the Defence & Aerospace Sector. After opening up the Defence Sector for private participation, there has been great interest shown by the private industry including the MSMEs in Defence Sector.

So far, 351 Indian Companies have been issued 568 Industrial Licenses for manufacture of defence items till February 2022. Here, I would like to emphasize that during 2001-2014, only 215 licenses were issued in 14 years.

Nitin Gokhale: What is the outcome of ‘Make in India’ and Atmanirbharta pitch so far?

RM:  One aspect where both knowledge and wisdom coincide is the ability to seek and gain self-reliance. India has for far too long remained dependent on import driven technologies. These not only come at a high long term financial cost, but also undermines the intellectual capital of our own industry.

No country that aspires to develop as a knowledge-based economy can sustain such reliance on defence imports. The Prime Minister’s emphasis on Atmanirbharta emerges from the pusuit of not only self-reliance but also self-esteem and self-belief. I am confident that India, in the near future, will not only be making defence equipment for its forces but will also for the world.

Nitin Gokhale: What is the model of public-private partnership (PPP) to boost domestic industry?

RM: The increasing collaboration between public-private enterprises is key to boosting the domestic defence manufacturing industry. Our private industry is coming of age when it comes to defence production.

The government is providing a suitable growth environment to the private sector. We have opened up opportunities to build a Mega Defence Programme, including fighter aircraft, helicopters, multi-mode Grenade, Arjun-Mark-1 tank, unmanned surface vehicle, See Through Armour and submarines through a strategic partnership model that will help our private companies become global giants in the years to come.

The number of online export authorisations during 2016-17 to 2018-19 was 1,210. It has increased to 1,774 in the last two years. This has resulted in defence exports of over Rs 17,000 crore in the last two years; more than 10,000 Small and Medium Enterprises (SMEs) have joined the defence sector and there has been an increase in research and development, start-ups, innovation and employment.

The present share of private companies is Rs.18,000 crore in a market of Rs. 85,000 crore. According to the current growth pattern, more than Rs. 1- lakh crore will be the contribution of the private sector in the Rs. 5 -lakh crore market of the future.

The public-private partnership will be mentioned as Defence Production Revolution in the annals of Indian defence in the times to come.

Nitin Gokhale: How was your recent visit to the United States and 2 plus 2 ministerial dialogue?

RM:  Our extensive engagement has yielded important results. We have expanded cooperation between both the countries and agreed to explore further cooperation in new domains.

During my visit I also shared India’s desire to steer the Indo-US partnership towards co-development and co-production with their companies. We have sought increased investments by US defence companies in India under the ‘Make in India’ programme.

Participation of US entities in industrial collaboration and partnership in research and development will enhance the pace of India’s ‘Aatmanirbhar Bharat’ campaign.