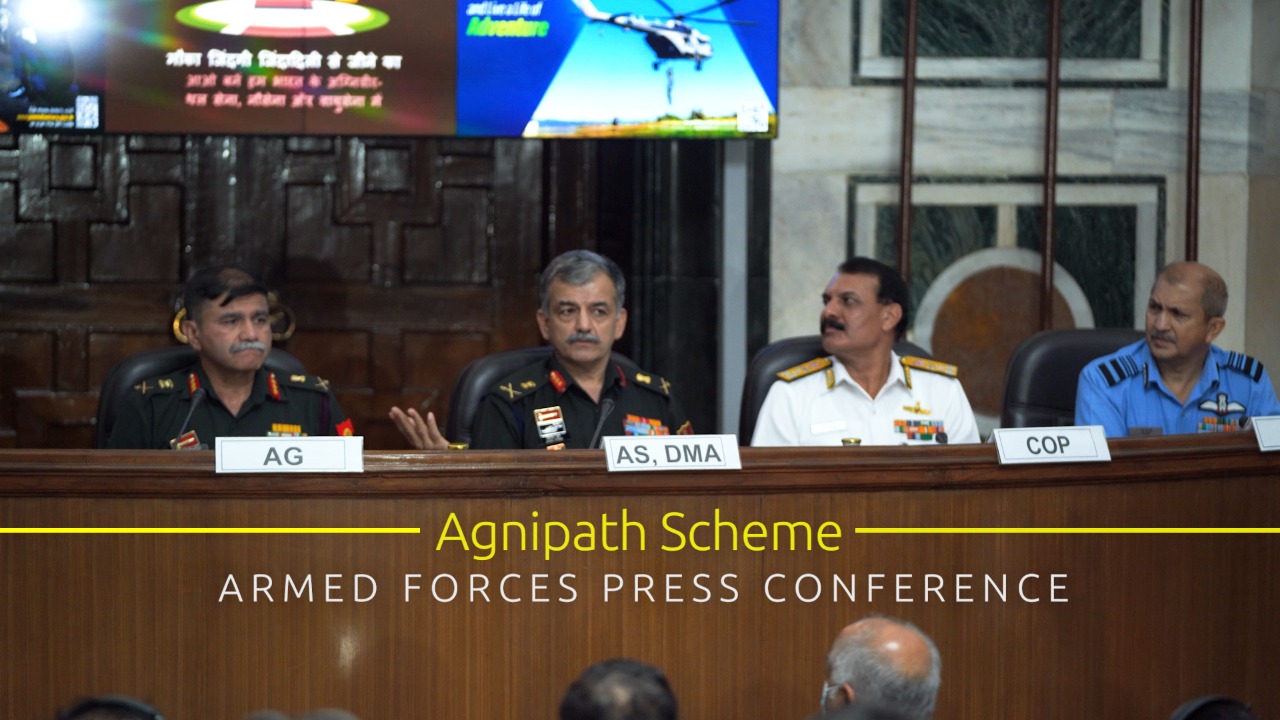 No Roll Back Of Agnipath Scheme Says Ministry Of Defence

Amid the rising demands of scrapping the newly launched Agnipath recruitment scheme for the military, the Ministry of Defence (MoD) has made it clear that there will be no rollback as the defence reforms such as this was long pending to infuse youthfulness and experience in the armed forces. The MoD organised a tri-services press briefing on Sunday to issue a stern warning on the ongoing agitation which has turned violent.

Describing the scheme as essential to maintain a young profile of the armed forces, the department said it would, in the future, increase the intake of ‘Agniveers’ to up to 1.25 lakh. The MoD, this year, plans to recruit 46,000 Agniveers – a reference to soldiers who would be selected for the four-year temporary military service.

“Our intake of ‘Agniveers’ will go up to 1.25 lakh in near future and will not remain at 46,000 which is the present figure,” Additional Secretary Lt Gen Anil Puri, Department of Military Affairs (DMA), while addressing the press conference.
“In next 4-5 years, our intake (of soldiers) will be 50,000-60,000 and will increase to 90,000 – 1 lakh subsequently. We’ve started small at 46,000 to analyse the scheme…and to build up infra capacity,” he added.

Puri also stressed that the government would not repeal the policy. “There will be no rollback. And why should it be? It is a progressive step to maintain a young force,” he said.

“We want a mix of josh and hosh and that is why we wanted to reduce the age profile. The average age is 32 years at present, and we want to reduce it as per the recommendations of the Kargil review committee and Arun Singh committee report,” he further stated. With Agnipath, the average age in the army will come down to just 26 from 32 years, which will be like the age profile of other modern armies in the world, he added. The top official explained that it was in 1989 that the thought process to decrease the average age first came about. He also emphasized that the Agnipath scheme had been discussed by all service chiefs and Chief of Defence Staff late Gen Bipin Rawat over the last two years, with multiple studies focusing on different aspects.

The Agnipath plan was unveiled by the government on June 15 following the clearance from the Cabinet Committee on Security (CCS). As per the scheme, aspirants aged 17-21 will be eligible for a temporary recruitment drive. After selection, they would be employed by the armed forces for four years. Following the completion of their term, only 25 per cent of the recruits will be retained and the rest 75 per cent will be demobilized. Since then the protests erupted over new rules which allow them to serve only for four years.

The Department of Military Affairs, in a stern warning, said those who will be booked by the police will become ineligible to be recruited by the military.

“Indian Army’s foundation in the discipline. No space for arson, or vandalism. Every individual will give a pledge that they were not part of a protest or vandalism. Police verification is 100 per cent – no one can join without that,” Puri said.

“And if any FIR lodged against them, they can’t join…They (aspirants) will be asked to write as part of the enrollment form that they were not part of the arson, their police verification will be done,” he added.

The Chiefs of Personnel of all the three Services also backed the policy during the press briefing, calling it essential to maintain a young and tech-savvy force. The Agnipath scheme will be rolled out within the next couple of weeks, announced by tri-service Chiefs of Personnel, adding that the first batch will undergo training between November and December this year, depending on the schedule of each service.

Air Officer-in-Charge Personnel, Air Marshal SK Jha announced that all the recruitment here onwards will be based on the Agnipath scheme only. “Agniveer batch number 1 registration process will start from June 24 and from July 24, phase 1 online examination process would start. “The first batch would be enrolled by December and training would commence by December 30,” he informed the media.

Indian Navy’s Chief of Personnel, Vice Admiral Dinesh Tripathi said that the Navy will induct women personnel as well through the Agnipath scheme. “Indian Navy has 30 women officers at present sailing on different Indian Navy ships. We have decided that under the Agnipath scheme, we will recruit women also. They will be deployed on warships also,” he added. From November 21 this year, the first naval ‘Agniveers’ will start reaching the training establishment INS Chilka, Odisha, Tripathi noted, further stating that “both female and male Agniveers are allowed for this”.

Whereas Adjutant General of Indian Army, Lt Gen Bansi Ponappa said that by December first week, “we will get the first batch of 25,000 Agniveers”, and the second batch would be inducted around February 2023 making it 40,000″. Army to hold 83 recruitment rallies across the country in August, September October and November for this purpose, he informed.