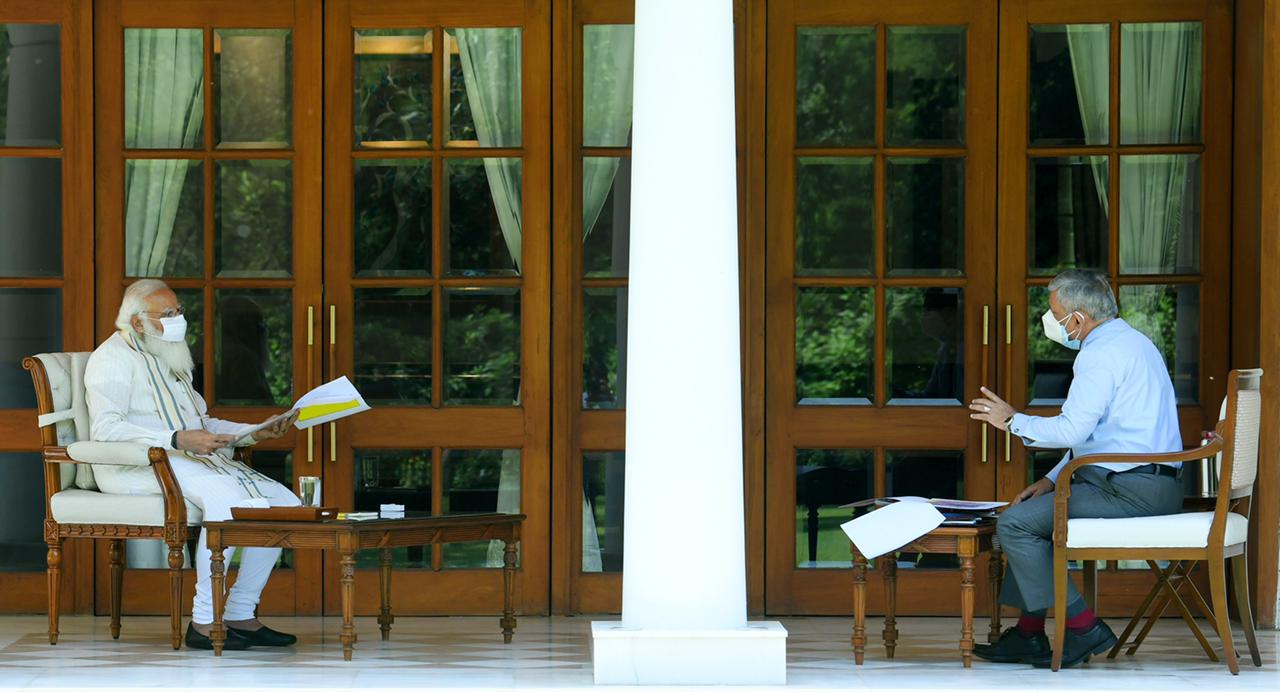 The Chief of Defence Staff (CDS), General Bipin Rawat briefed Prime Minister Narendra Modi about the operations and measures being undertaken by the Armed Forces to deal with the COVID-19 pandemic. Gen Rawat informed the PM that all medical personnel from armed forces who have retired or taken pre-mature retirement in the last two years are being recalled to work in COVID-19 facilities in proximity of their current place of residence. Other medical officers, who retired earlier, have also been requested to make their services available for consultation through medical emergency helplines.

He also informed the PM that all medical officers on staff appointments at Command HQ, Corps HQ, Division HQ & other similar HQ of Navy and Air-Force will be employed at hospitals. Besides, nursing personnel are being employed in large numbers to compliment the doctors at the hospitals.

PM was briefed that Oxygen cylinders available with armed forces in various establishments are being released for hospitals. The PM also reviewed the operations being undertaken by IAF to transport Oxygen and other essentials in India and abroad.

The CDS also said that they are creating medical facilities in large numbers and where possible military medical infrastructure will be made available to civilians.

The PM and the CDS also discussed extending medical assistance to veterans, especially those in remote areas. All Kendriya and Rajya Sainik Welfare Boards, and officers posted in various headquarters in Veterans Cells are being instructed to coordinate the services to veterans and ensure it reaches the remotest areas.

The Indian Air Force has intensified its efforts for COVID-19 relief with its transport aircraft ferrying large Oxygen containers to filling stations in different parts of the country as well as from abroad. Among the many sorties that the IAF undertook was a C-17 Globemaster III transport aircraft that flew from the Hindon airbase outside Delhi to Singapore and returned to Panagarh in West Bengal with four Cryogenic Oxygen containers on Saturday. The containers were filled up and transported to different centres for COVID-19 relief by rail/road.

Wing Commander Ashish Moghe, PRO, IAF further informed that, “the IAF’s C-17 transport aircraft has landed in Dubai today and has airlifted six Cryogenic Oxygen containers from there and is expected to reach Panagarh airbase by evening today. Indian Air Force has also planned six more containers to be airlifted tomorrow from UAE.”

The last couple of days have seen the air force carrying out several sorties to airlift Oxygen containers, cylinders, essential medicines and equipment required for setting up and sustaining COVID-19 hospitals and facilities to deal with the surge in infections. The IAF is using a variety of aircraft for pandemic relief work including C-17, C-130J, IL-76, An-32, Avro, Chinook and Mi-17 helicopters.

The Indian Navy has been providing aid to civil authorities and friendly foreign countries. Several quarantine facilities have been set up in naval premises at Mumbai, Kochi and Visakhapatnam for use by our citizens. Dedicated COVID wards/ hospitals including ICU and HDU have been established as an aid to civil health authorities. Besides, officers and sailors from the medical corps have been deployed for providing services at the COVID hospitals in New Delhi, Patna and Muzaffarpur.

Indian Navy ships under Southern Naval Command at Kochi are progressing with the mission of “Oxygen Express” to render support to the local administration of the Union Territory of Lakshadweep in the fight against the pandemic, informed Commander Vivek Madhwal, Spokesperson of Indian Navy.

He further added that the INS Sharda, based at Kochi, undertook the transfer of essential medical supplies to the capital Kavaratti. The stores consisted of 35 Oxygen cylinders, Rapid Antigen Detection Test (RADT) kits, Personnel Protective Equipment (PPE), masks and other items to fight the COVID 19 pandemic.

Additionally, 41 empty Oxygen cylinders from the islands have been embarked on board Indian Navy hired vessel, Meghna. The vessel is now headed to Kochi for the refilling of the empty cylinders and will head back to Kavaratti with filled cylinders soon to ensure that the Oxygen supply continues unabated.

Besides, it has also reserved 10 beds including ICU facilities for patients from Lakshadweep at INHS Sanjivani, Kochi to cater for shortages in beds at the islands. Naval Air Station INS Garuda has also been placed on alert to extend naval airfield facilities for helicopters ferrying patients. Air Evacuation Pods developed indigenously by the Naval Aircraft Yard, Kochi to airlift COVID-19 patients from the Islands as well as from elsewhere are also being made ready for emergency requirements, according to the Indian Navy.