A few good things are happening on the defence procurement landscape. It is good that the government took its time for the Dhirendra Singh Committee to give its report and incorporated many of its recommendations while framing the Defence Procurement Procedure (DPP) 2016. Some far reaching suggestions have been subjects of other follow-on sub-committees; one of them, the Vivek Rae Committee, has been constituted to look into, possibly the most far reaching recommendation of the Dhirendra Singh panel, viz., the creation of a Procurement Executive (PE) outside the formal structure of the Ministry of Defence (MoD). This writer was privileged to make a presentation to the Committee and this piece encapsulates the views put forth.

The writings in India on resolving the ills of defence procurement have centred round adopting the models followed by the West, namely, in the US through its Defence Acquisition Corps concept, the Director Generale of Armament (DGA) of France and in the UK model that has its Defence Equipment and Support (DE&S) department. It must be remembered that these nation too have gone through the trials and tribulations that India is facing and their structures have evolved through many Dhirendra Singh and Vivek-Rae type of studies. Thus, while a PE must be placed outside the formal MoD structure, the process must be gradual over five-year phases. This is centered on the reality that India would continue to be an importer of big ticket items for the next 15 years at a minimum and the period must be used to activate the PE to its full potential.

At present, in fact all these past seven decades, who in the Government has been mandated to equip India’s war fighter? If the Government can answer this question, the problem would be solved!! Has it been the Defence Secretary or was it the DG Acquisition? Or have the Service Chiefs, who have no financial and administrative powers, somehow been responsible, for it is they who are most vocal about the deficiencies? Ever heard a non-uniformed government official speaking and ruing the poor state of defence procurement? The fact is that while the Raksha Mantri’s Op Directive tasks the Service Chiefs and Chairman Chiefs Of Staff Committee with specific duties in the defence of the nation, there is no one mandated by law to equip them. So, bureaucrats have come and gone and political parties have formed governments and have been replaced, without any one being held accountable for the deplorable state that India finds itself in. In the countries mentioned earlier, the head of the defence procurement chain is mandated by law to equip the armed forces and he is either a political appointee himself or reports directly to one. The US has the Under Secretary of Defence (Acquisition, Technology & Logistics) cleared by the Congress while in the UK the head of the DE&S is responsible to the Parliament through the Minister of State for Defence. The procurement organization of these countries is the ‘spine’ to which are attached various experts who act as ‘organs’ to keep the system live and receptive. While the experts come for fixed or determined periods of time, depending on the intricacies of a project, it is the ‘spine’ that provides the institutional knowledge, legal and procedural expertise, direction to research and development and the impetus to guide procurements in continuum. So, if the Air Force has to purchase an aircraft, the route followed in India and the other nations is broadly as under. 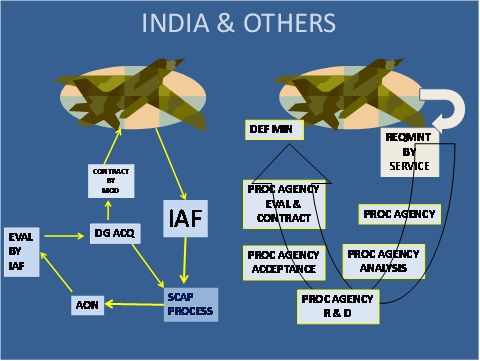 In India, different agencies push a case file sequentially while abroad the case is taken up by the boss of the procurement agency and pushed through to fruition —  in many cases, ‘fruition’ includes in-service use and maintenance till the equipment is phased out.

So, taking a cue from others and moderating it with conditions unique to India, the proposed Indian procurement organization should have the following: – 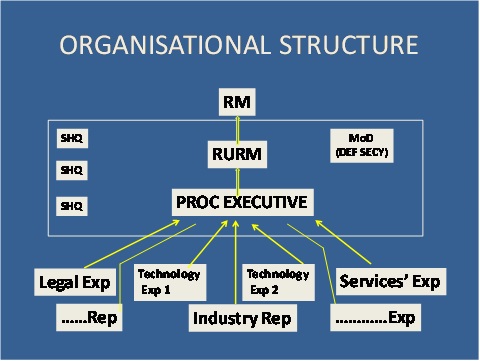 The following recommendations are made: –

In the US, the Defence Acquisition University was born from the ills of what their defense historian, William Gregory, described as the acquisition system being one that had been “managed and over-reformed into impotence with volumes of oversight regulations. He added that the Congress had been pursuing an impossible dream by trying to legislate perfection when, “no regulation could create good management or top-notch people.” Does that ring a bell for us??

The result in the US was the setting up of a permanent Defence Acquisition Corps that ensures continuity ‘from cradle to grave’ of a project. We have no other option but to start the training NOW, while other recommendations are implemented in parallel.

(The author retired from the IAF as an Air Vice Marshal; he is presently a Distinguished Fellow at the Centre for Air Power Studies, New Delhi. Views are personal).

Air Vice Marshal Manmohan Bahadur, retired from the Indian Air Force after 36 years of distinguished service. He is an Experimental Test Pilot from the French Test Pilots School, a graduate of the Air Command and Staff College, USA and a post graduate in Defence and Strategic Studies from Madras University.