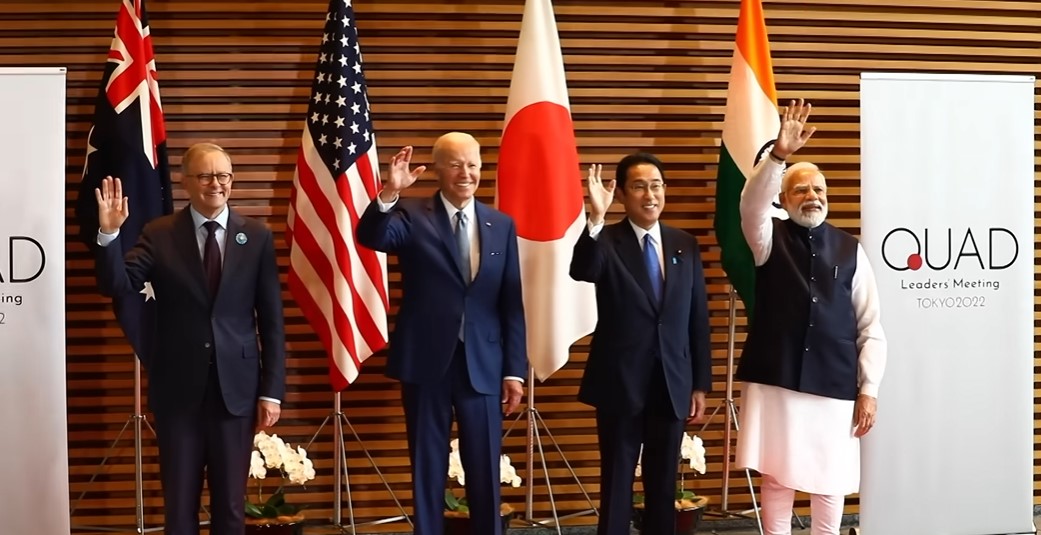 For QUAD to prove itself as an effective mechanism, it must take substantive steps to bring the conflict in Ukraine to an end. The recent QUAD meets in Tokyo had more platitudes to offer on the issue rather than options that may be pursued to terminate the conflict. An excellent opportunity to search for solutions was lost in the bargain.

“The belief in the possibility of a short decisive war appears to be one of the most ancient and dangerous of human illusions.”  Robert Lynd

Much as Tolstoy would disagree, the world has existed in two states: war and preparation for the next war. Frankly, we have never seen “War and Peace!” As Indian Prime Minister Narendra Modi returned from his visit to Japan for the second in-person meeting of the QUAD, all eyes have been on Tokyo to see what the important leaders of this newly formed organisation discussed and decided. The challenges being faced by the world have only been exacerbated by the Russia – Ukraine crisis, which was already in its fourth month as the QUAD summit began. The Indian Prime Minister had bilateral meetings with the American President Joe Biden and the newly elected Australian Prime Minister Anthony Albanese.

Travelling to Tokyo at the invitation of his Japanese counterpart, Fumio Kishida, the Indian PM also interacted with Japanese business leaders where an investment of five trillion Yen in public and private financing over the next five years was looked at. The comprehensive strategic partnership that India has, individually with the members of the QUAD, no doubt got the requisite importance in the bilateral meetings but what gained salience was the stand that the leaders collectively took to alleviate the stress on the economy, measures to collaborate on space and cyber domains, emphasis on climate change, countering non-traditional security threats and the pledge to invest $50 billion on infrastructure projects in the region. The Russia – Ukraine conflict was discussed, and the joint statement spoke of the need for all states to respect each other’s sovereignty and territorial integrity. The need to seek peaceful resolution of all disputes in accordance with international law was underscored.

The indications so far, with the obduracy of Russian President Vladimir Putin and Ukrainian Prime Minister Volodymyr Zelensky, do not portend well for the future. Much has been written about the past and the causes that have resulted in the present stalemate between the two countries that don’t seem to be ending. Looking in the rear-view mirror, though helpful, will not give direction to the future. What needs to be done is to seize the moment and look at solutions that are practicable and lead to the cessation of violence and the much elusive peace that everyone craves. The QUAD between themselves accounts for 34 trillion dollars of the world economy and the shared vision of a free, fair, and open Indo Pacific region. Conflicts that take place in any region have the ability to create ripple effects across nations in an increasingly interconnected world.

Russia’s military capability, its natural oil and gas production and distribution with its military-industrial complex which has extensive exports to many countries along with Ukraine’s military-industrial capability have created a domino effect that is being felt across the globe. The sanctions by the US and the European Union have only made matters worse for the global economy which is witnessing an unprecedented recession and inflation. Lakhs of people have been displaced because of the conflict, having lost their jobs and livelihood apart from the many who have been the unfortunate victims of the violence and carnage unleashed.

China, which is averse to the term Indo Pacific, instead prefers to call it the Asia Pacific and views QUAD as an alliance that is “bound to fail,” as expressed by their Foreign Minister Wang Yi ahead of the Tokyo Summit while speaking at a joint press conference with the Foreign Minister of Pakistan Bilawal Bhutto. Beijing views the alliance as an ‘Asian NATO’ aimed at containing China and making the Asia Pacific countries ‘pawns’ of US hegemony in the region. According to Wang Yi, the US was trying to wipe out the achievements and peaceful development of the countries in the region where there was a general reluctance by the states in the region to take sides in the Russia – Ukraine conflict.

China’s apprehensions are likely to push Russia closer to China and this development may not augur well for the future. With Russia being pushed into a corner due to the intransigence of the western powers who continue to equip, arm, and assist Ukraine in the ongoing conflict, the situation could easily reach a point of no return. The inability of the United Nations to either prevent or mediate conflicts wherein the interests of the P-5 nations are involved has been proven time and again. Under the circumstances, it would be naive to expect the United Nations Security Council to play an active role in ending the conflict, unless its structure and functioning are revamped, towards which there appears to be little effort and a lack of will by the permanent members who have vested interests. So, what should be done?

The QUAD summit provided an opportunity for its members to take a lead in making genuine and sincere efforts to bring the conflict to an end. The joint statement however only expressed platitudes on the need to resolve conflicts through dialogue and peaceful means in accordance with international law. The member states must make sincere and genuine efforts to allay the apprehensions of China by ‘walking the talk’ when they speak of a rules-based order.

The double standards either by the US or China must be admitted and acknowledged through a free and frank dialogue which should lead to a gradual build-up of mutual trust and understanding. Assurances made to Ukraine by the Budapest Memorandum in 1994, when it agreed to give up its nuclear arsenal have not been respected by any of the signatories including Russia which violated the territorial integrity and sovereignty of Ukraine in 2014 by annexing Crimea, and by the US and UK for failing to ensure the territorial integrity of Ukraine.

The lessons for the non-proliferation regime under the NPT umbrella are being questioned today for which the P-5 nuclear-weapon states do not have any convincing answers. The leaders of the QUAD must exhibit statesmanship and sagacity in bringing the warring factions together on the negotiating table and goad everyone towards giving peace a chance, as peace can never be piecemeal.