Describing the operational induction of first batch of five Rafale fighter jets into Indian Air Force (IAF) as a “game-changer” for India’s national security, Defence Minister Rajnath Singh said its induction is a strong message for the world and especially for those who challenge India’s sovereignty. Speaking at a glittering ceremony, Singh said the rapid deployment of IAF assets at forward bases created a trust that our Air Force was fully prepared to meet its operational.

The induction ceremony took place at the Ambala Air Force base yesterday, where IAF’s 17 Squadron, also called ‘Golden Arrows’, is based. The Rafale aircraft which arrived at Air Force Station, Ambala from France on 27 July, 2020, would be part of the ‘Golden Arrows’ squadron. 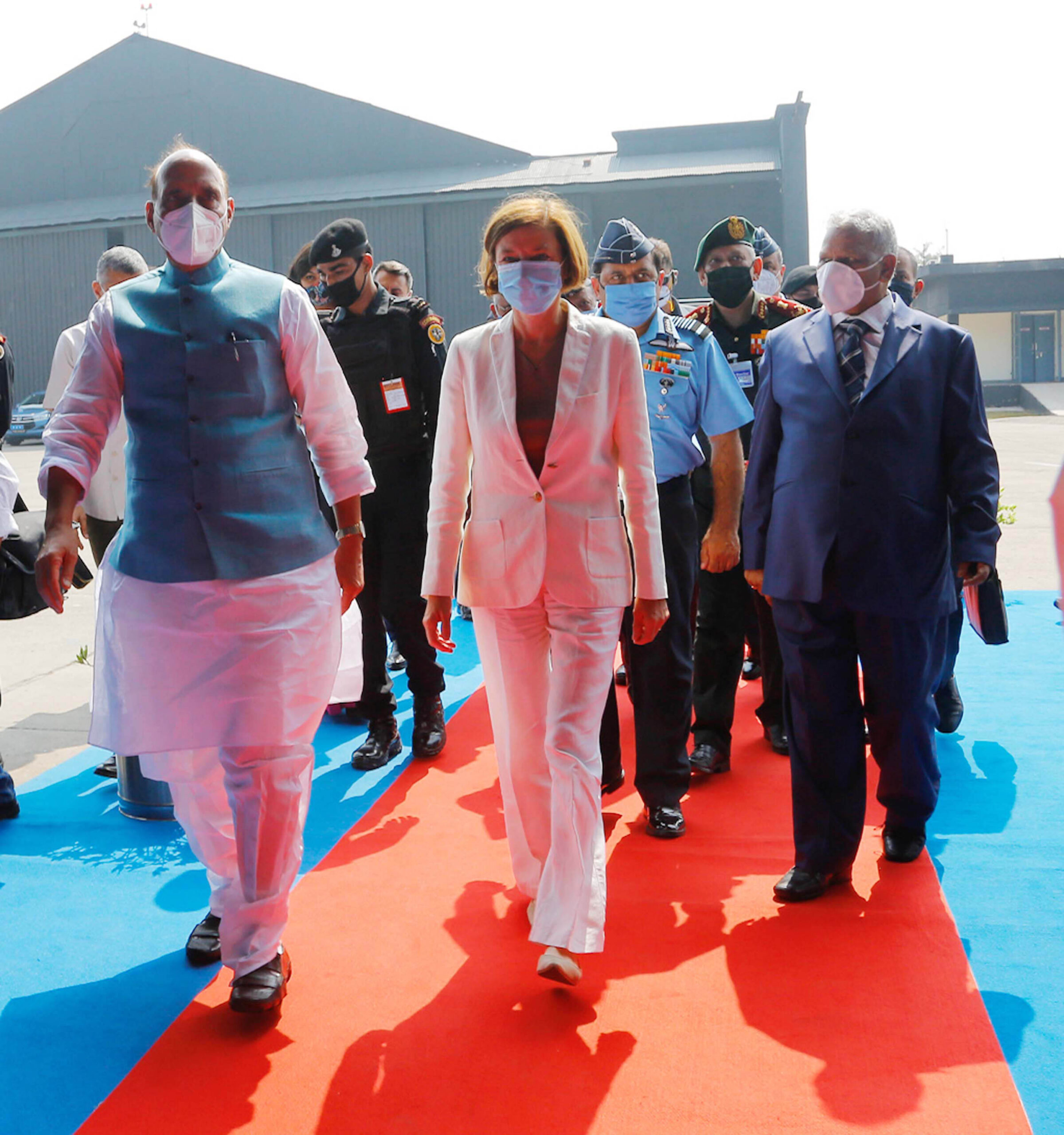 Terming the Rafale induction as a reflection of India-France strategic relationship, Rajnath Singh said, “We have cooperated closely in a number of areas to enhance our defence cooperation. As part of the transfer of technology agreement, six Scorpene submarines are being built at the Mazagaon Docks. On the basis of this partnership, the first submarine, INS Kalvari was commissioned in 2017.” He also highlighted the Indo-French cooperation in dealing with common challenges like maritime security and piracy in the Indo-Pacific and Indian Ocean Region.

He also pitched for French investments in the Indian defence manufacturing sector. He said, in response to the call for ‘Self-reliant initiative’ by Prime Minister, Narendra Modi, many policy reforms have been initiated such as manufacturing of defence equipment under the strategic-Partnership model, enhancing FDI up to 74 per cent by automatic route, establishment of two defence corridors in Uttar Pradesh and Tamil Nadu and reforms in Offsets management. “I am confident that French defence industries will take advantage of this and France will continue to be our partner in our journey of indigenization”, Singh said.

Minister of the Armed Forces of France, Florence Parly in her address said today’s induction of Rafale into the IAF is a symbol of strong ties between the two countries which is rock solid and time tested. She said now, in military terms, India will acquire a world class capability in strategic terms and it will give India an edge over the entire region to defend itself. She also assured timely delivery of the 31 remaining aircrafts. Parly also said France is fully committed to the Make in India initiative which has been a reality for French industry for several years particularly in defence sector like in submarines.

A large delegation of senior functionaries of French Defence Industries which included Eric Trappier Chairman and Chief Executive of Dassault Aviation and Eric Beranger, CEO, MBDA were present during the ceremony.

In strategic terms, India will have an edge over the entire region with the operationalization of twin-engine multirole Rafale combat aircraft. The five aircrafts, three-single seaters and two twin-seater trainers, give a major capability boost to the IAF amid falling squadron strength. Developed by French aircraft manufacturer Dassault, Rafale jet is capable of ground support, aerial reconnaissance, deep strikes, and interception. All the 36 Rafales and can also deliver nuclear weapons, and will become fully operational in 2022. The Ambala and Hasimara airbases will house 18 each for the western and eastern fronts. These super fighter jets will significantly add to the qualitative and quantitative edge IAF already enjoys over the Chinese Air Force along the 3,488 km Line of Actual Control (LAC).

Upon India’s request, France has speeded up deliveries of Meteor Beyond Visual Range (BVR) air-to-air missile missiles along with the first batch of jets. The meteor missiles are best in the world for air combat duels, with a greater no escape zone for enemy jets. Rafales with their ‘Meteor’ air-to-air missiles (120-150 km strike range) ‘SCALP’ air-to-ground cruise missiles (over 300 km range) both developed by France-based European missile maker MBDA and other modern armaments will be a force to reckon with. Each jet can carry two fire-and-forget SCALP cruise missiles to hit-high value fortified targets. These both missile systems are mainstay of the weapon package of the Rafale jet. The IAF is also arming the Rafale with HAMMER (Highly Agile Modular Munition Extended Range) medium-range air-to-ground missiles being procured through emergency route. China and Pakistan do not currently have any missiles of this class in their combat inventories. 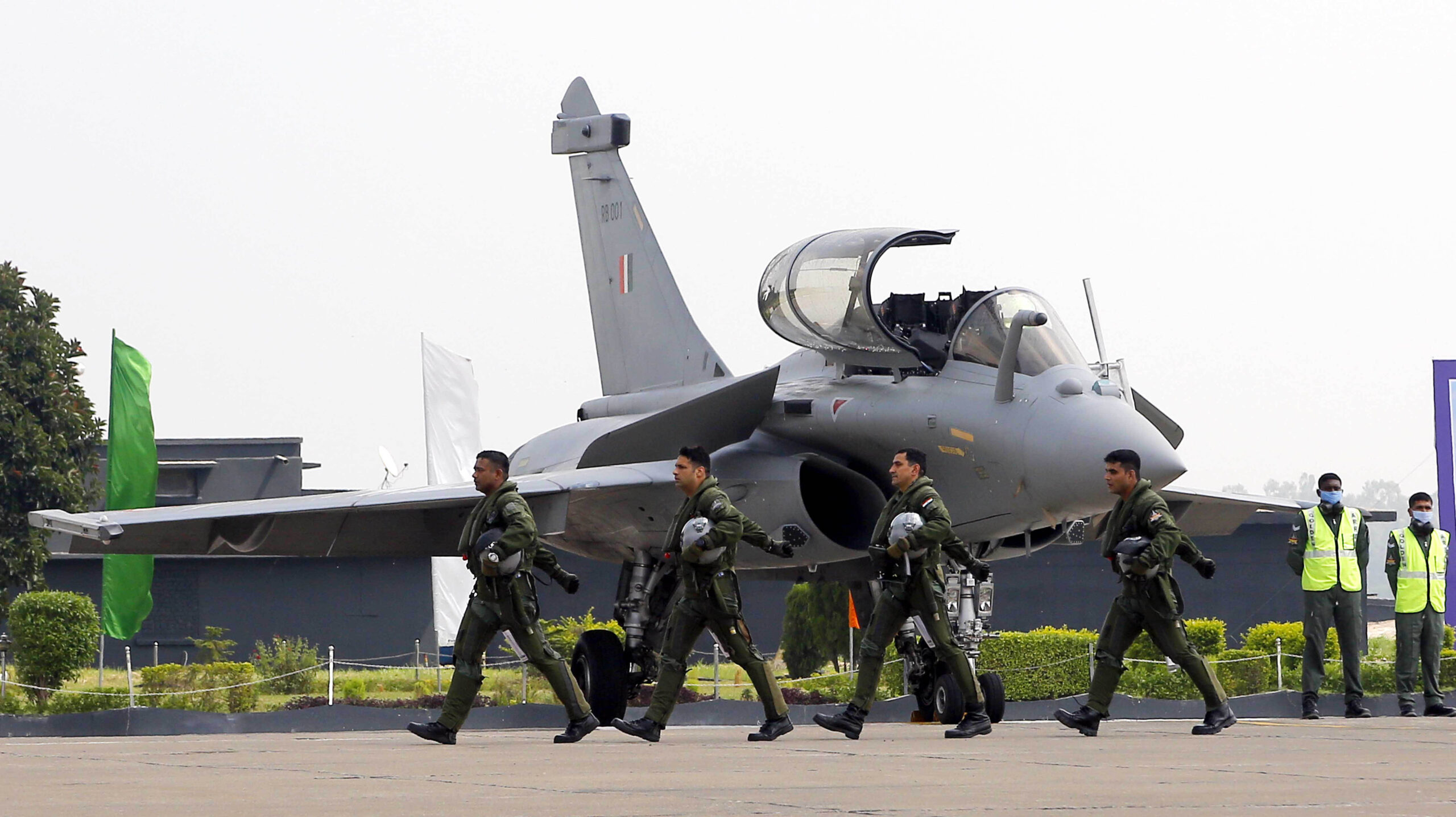 With a combat range of 780 km to 1,650 km depending on mission, the Rafales come armed with a deadly weapon package, advance avionics, radars and electronic warfare systems, infra-red tracking systems to prevent jamming by adversaries and ensure superior survivability in hostile airspace. Rafale jets are capable enough to outgun and outrun Chinese Chendgu J-20 fighters and Pakistani F-16 and JF-17.

In September 2018, India ordered 36 Rafale multi-role fighter jets in fly-way conditions from France through Inter-Governmental Agreement at a cost of around Rs. 59.000 crore. Defence Minister Rajnath Singh received first batch of Rafale jets in France on 29 October 2019 but have since been used for training IAF pilots there. The second batch of four Rafale jets are expected to arrive in October.

Air Chief Marshal RKS Bhadauria said “the induction of Rafale jets could not have happened at a more opportune time, given the security challenges today. Rafale being based in Ambala is important as the fleet can rapidly access all areas of interest from the air base”. His observation was in a reference to the ongoing standoff with China along the LAC in eastern Ladakh.