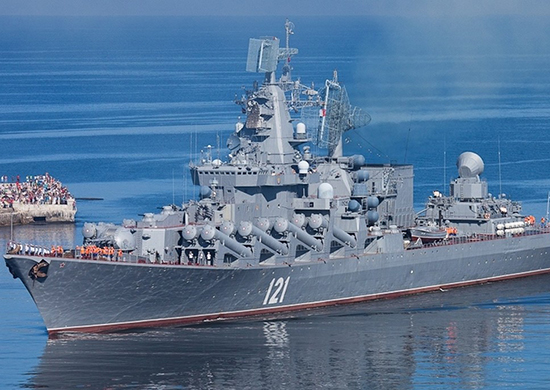 Moskva is lost. Buried deep beneath the Black Sea’s waters. The Russian Navy Black Sea Fleet’s flagship cruiser with a max displacement of 11,400 tons with its load of missiles, armaments, and logistics has sunk in the waters of the Black Sea.

The keel of Moskva, then known as Slava, was laid in 1976 in the shipbuilding plant at Mykolaiv, Ukraine. Incidentally, Mykolaiv is a bitterly fought over town today with Russians and Ukrainians fighting for it inch by inch.

The ship was commissioned in January 1983. In April 2000 Moskva was adopted as the Flag Ship of the Russian Black Sea Fleet. Moskva took part in the Russian invasion of Georgia in 2008. The Georgian Navy was able to strike Moskva with a missile hit, before being overrun by the Russians. In 2014, Moskva took part in a blockade of the Ukrainian Navy during Russian operations to annex Crimea.

Moskva has been leading the Russian naval operations along the Ukrainian shores since the Russians launched their Special Military Operations against Ukraine on 24 February 2022.  Unlike cruisers that are designed keeping in view the protection of the Aircraft Carrier of the Fleet, Moskva was aggressively designed to go for the enemy’s aircraft carrier. Accordingly, Moskva had the capacity to carry 16 supersonic cruise missiles. The current compliment was made of P-1000 Vulcan Missiles. In addition, the ship carried S 300 missiles, AK- 130 twin dual-purpose gun, and AK 630 close-in weapon systems. It also had torpedoes. It has taken part in the attack on Snake Island where a small detachment of 13 Ukrainians refused to surrender, before ultimately being captured by the Russians.

The Moskva’s demise remains a debated issue as are most such events in the fog of war. The Ukrainians claim that the 611.5 feet long Moskva that sails at a maximum speed of 32 knots and creates a three-tiered air defence bubble was hit by two of their Neptune missiles on 13 April 2022. The Russian news agency Tass quoting Russia’s defence ministry sources reported that “A fire on-board the Moskva missile cruiser caused a blast of the broadside munitions”. The Russians also informed the Moskva was being towed to port and that the crew has been evacuated. However, somewhere along the route, Moskva sank beneath the rough seas.

The Russians had reported that Moskva’s crew of approximately 500 sailors have been evacuated. That’s 500 lives, and for most of the world, it doesn’t matter whether they are Russians or Ukrainians. All that matters is its 500 lives saved. However, western reports suggest over 400 may have sunk with the ship.

What also matters is whether or not the Moskva was carrying nuclear warheads?  Some experts believe two warheads could be on-board.