Naval shipbuilding can contribute immensely to the vision of making India a $5 trillion economy by 2024 said Admiral Karambir Singh, Chief of the Naval Staff, Indian Navy in New Delhi. Speaking at the ‘International Seminar on Nation Building through Shipbuilding’, organised by FICCI the Naval Chief said that there is enough headroom in the mercantile marine sector for India to attain the critical mass and become a hub for defence shipbuilding.

With the Navy’s budget declining and it is facing internal defence Ministry opposition to its proposal for building a second indigenous aircraft carrier, the Naval Chief rejected “a narrative, where budgetary allocation for naval shipbuilding is considered by some to be a drain on the economy.” 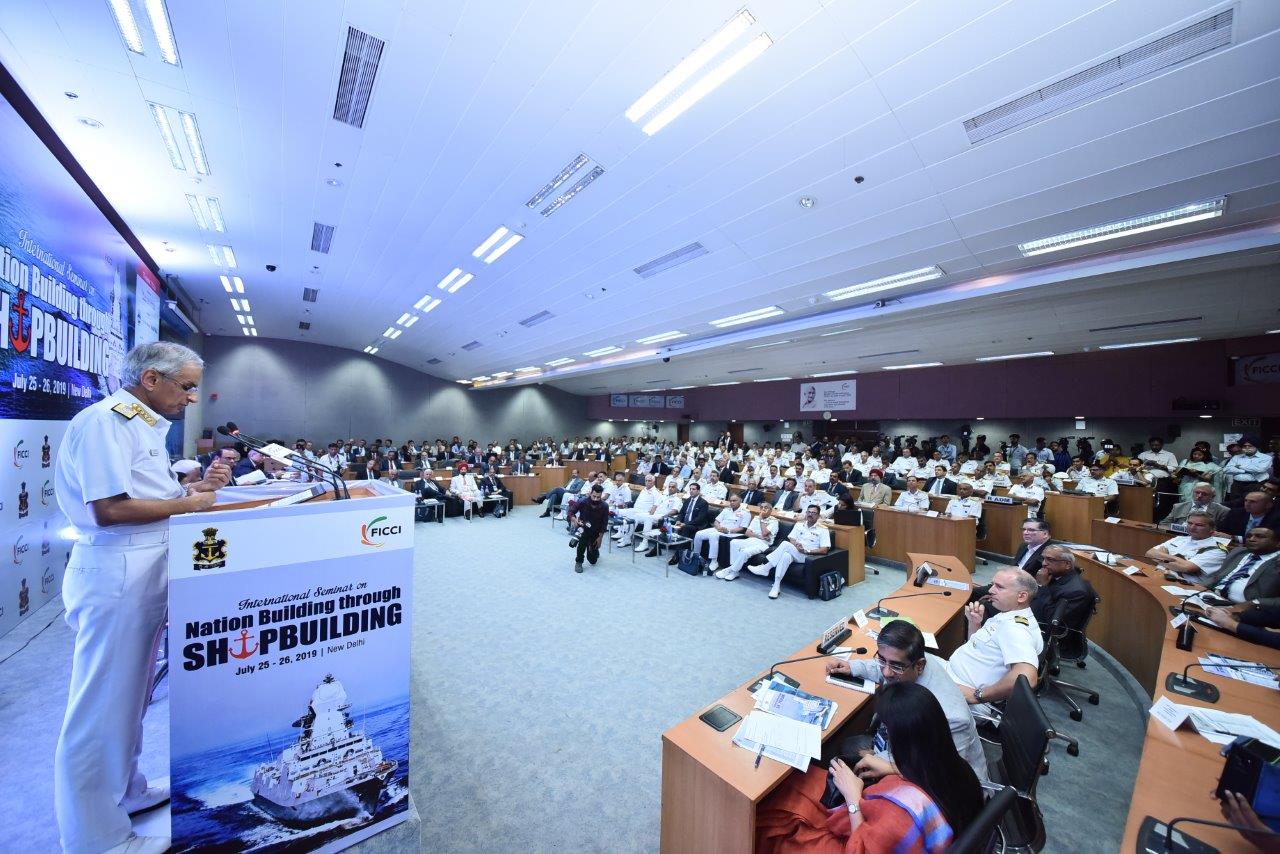 Arguing naval shipbuilding is far from a fiscal drain, Admiral Singh put forward a three-point argument that “ what is sometimes perceived as a ‘drain’ or even as ‘sunk cost’ is not so and that Naval shipbuilding contributes handsomely to economic growth and nation-building.”

Admiral first cited a “plough-back effect in which, he said, a very large proportion of every rupee spent on the Navy is ploughed back into the Indian economy.” Explaining that, the Naval Chief pointed out, “With more than 60 per cent of the Naval budget is dedicated to Capital expenditure. Nearly 70 per cent of this Capital budget has been spent on indigenous sourcing, amounting to nearly Rs 66,000 crore in the last five years. Since the launch of ‘Make in India’ in 2014, 80 per cent AoNs (Acceptance of Necessity) on cost basis has been awarded to Indian vendors. Of the total 51 ships and submarines on order at various shipyards as on date, 49 are being constructed indigenously. This highlights the considerable levels of plough-back of naval shipbuilding into the economy.”

He further added, “Nearly, 90 per cent of ship repair by value is undertaken by Indian vendors and mostly MSMEs, implying that in addition to the capital budget a high proportion of navy’s revenue budget is also being ploughed back into the economy.” Admiral Singh also highlighted how shipbuilding created logistics, spares and project support ecosystems, new capacities within shipyards, employment generation and skill development. He also said time and cost overruns in ship construction created challenges for the navy.

Admiral’s second point was that naval shipbuilding catalyses for employment generation and skill development. “Shipbuilding is a skilled activity. Each shipbuilding project involves considerable investment of manpower, with commensurate employment and skilling of the workforce. As platforms become more complex, skill levels are also proportionately upgraded.”

Explaining it further, Admiral said manpower employed for constructing a commercial ship of about 30,000 tons is less than the manpower employed in warship construction of about 6,000 tons. Also warship construction requires a much higher ratio of white-collared workers, vis-à-vis blue-collared workers, given the inherent complexities involved. Thus, employment opportunities are extended to more widespread educational backgrounds, especially the educated youth of our country. Besides, statistics show that the multiplier effect of one worker employed in a shipyard is approximately 6.4 on ancillary industries. “Project 17A (to build seven) frigates, for instance, is expected to employ a workforce of about 4,500 workers annually within the yard, but nearly 28,000 personnel per year as outsourced manpower from ancillary industries”, added Admiral Singh.

Finally, Admiral Singh said, “Naval shipbuilding projects contribute to strategic outcomes for the nation”. He cited warships built in India for Seychelles, Maldives and Sri Lanka.  “As India’s ship-building industry matures, there is immense potential to forge strategic partnerships and convert India into a strategic hub for defence ship-building exports and repairs to friendly foreign Countries”, he added.

To enable such strategic outcomes, however, there is a need for the nation to achieve a certain ‘critical mass’ in indigenous ship-production and ship-repair capability. Whilst defence ship-building plays an important role. We need to harness the headroom available in sectors, such as mercantile marine and coastal shipping, to increase capacities and attain true potential, he concluded. 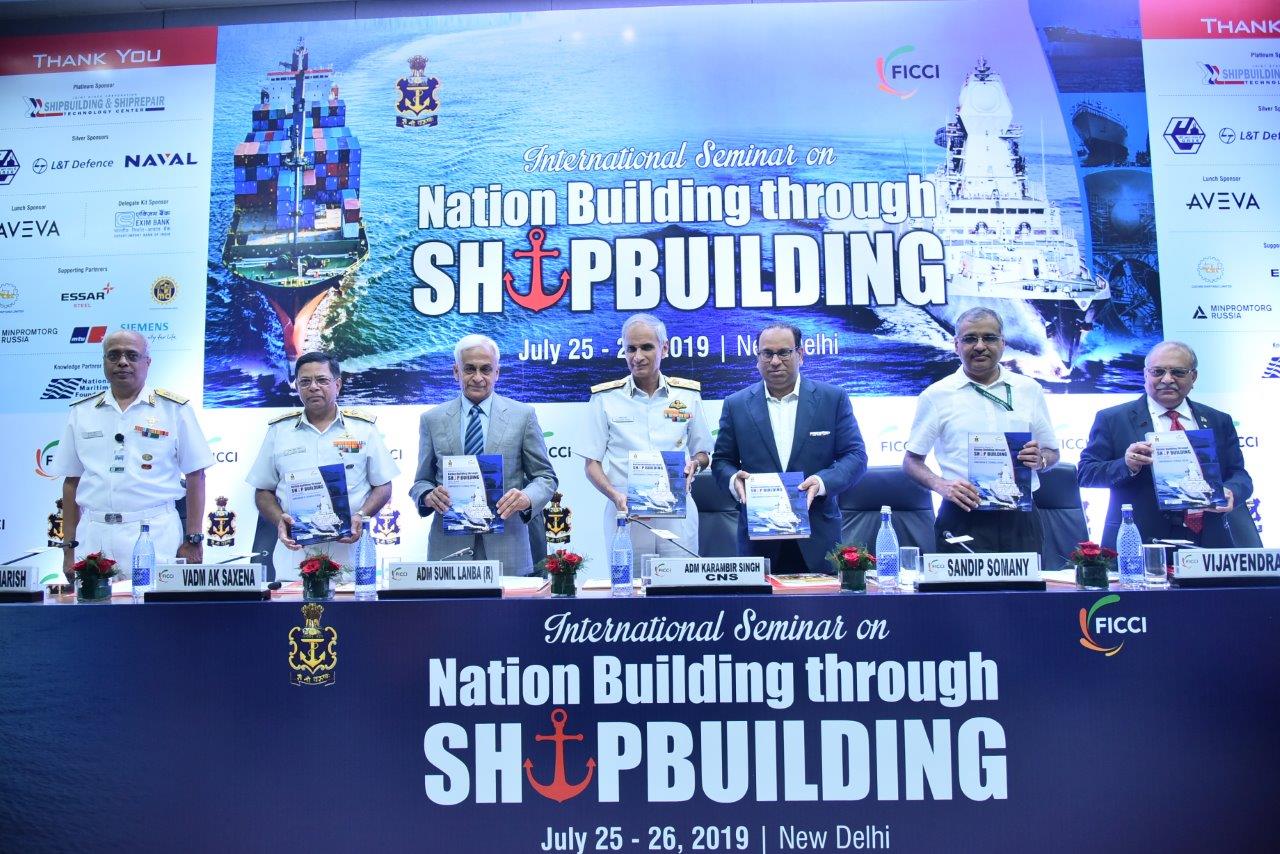 Meanwhile, former Navy Chief Admiral Sunil Lanba, Chairman, National Maritime Foundation (NMF) said if shipbuilding is developed further it could add one lakh jobs to the economy. For that, we need a comprehensive policy and support which will address all three segments – construction, repair and breaking. The Navy’s experience with private shipyards in the past decade had been poor, he added.

Rear Admiral G K Harish, Director General Naval Design of Indian Navy painted a gloomy picture of the Indian shipbuilding industry in the seminar. Between years 2002-2007, India’s share of global shipbuilding orders rose six-fold from 0.2 to 1.2 per cent. Encouraged by its growth the government set a target of garnering 7.5 per cent of global orders by 2017. However, after the global recession of 2008, India’s share plummeted to 0.01 per cent of the global trade.

Shipbuilding Division should be headed by a full-time Secretary rather than an Additional or Joint Secretary in the Ministry of Shipping to deal with it efficiently. Benchmark efficient yards. Develop strong R & D facilities and design capabilities for the commercial shipbuilding.

It is apparent that shipbuilding requires strong government support for its initial growth and sustainability on the same lines as was done in the USA, Japan, South Korea and China. More recently, Vietnam and Philippines have put shipbuilding on the national agenda and rank far ahead of India in terms of shipbuilding, though India has better capacity, capability and skill sets in shipbuilding than both these countries.

According to shipbuilding industry, with India’s economy now being driven on a strong EXIM model and a revival of interest in coastal and inland transportation there is a definite need to revisit the sector. India must regain its pre-eminent position as a great shipbuilding nation and the opportunity exists in terms of size, scale and scope, to make this a reality today and therefore should be seized.