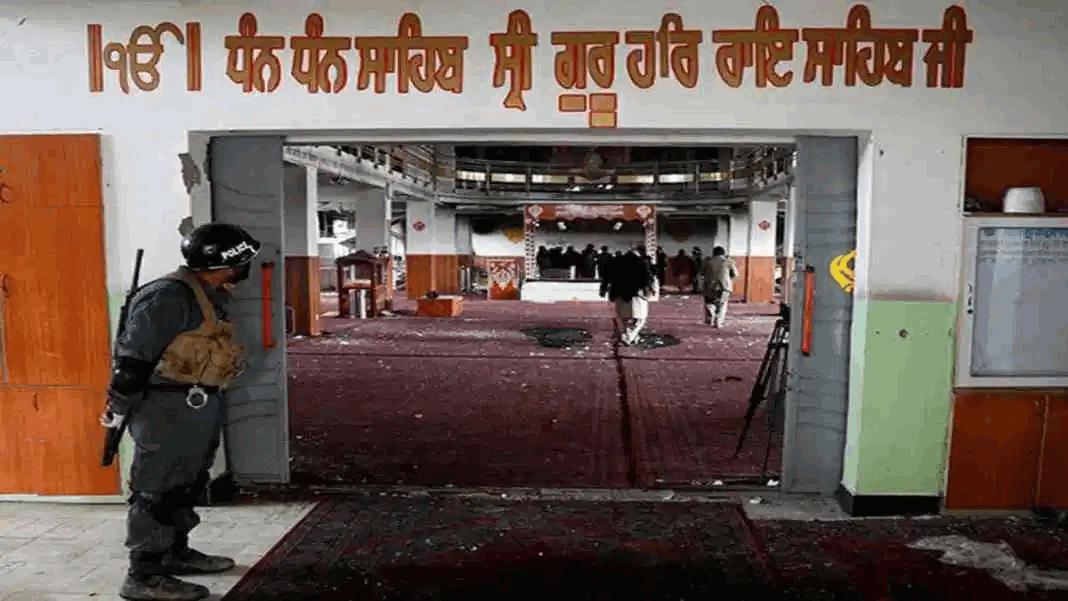 Sikh Gurdwara at Epicentre of Terrorist Violence in Afghanistan

Sikhs have been inhabitants of Afghanistan for centuries. They have been a prosperous community and have displayed adequate acumen in business ventures. Their numbers today reflect a steep slide; the phenomenon having started mostly after the Taliban takeover of the country. However, a small Sikh community has continued to stay put in what they consider as their homeland, even today. A well-orchestrated attack on the lone surviving Gurdwara in Kabul may rock the courageous stance displayed so far.

Amidst the cacophony of the COVID-19 crises and PM Modi’s 8 PM announcement of a 21-day lockdown, TV screens ran scrollers informing viewers of a terrorist attack on a Sikh Gurdwara in Afghanistan’s capital, Kabul. Initial reports were garbled and provided contradictory information. The ISIS- Khorasan, through its Amaq News Agency, put out a statement claiming that its suicide attacker with the nom de guerre Abu Khalid al-Hindi had carried out the attack reportedly killing over 30 worshippers and wounding 50 more. The Afghan Security Forces spokesperson claimed that they had stormed the Gurdwara, rescued over 80 hostages and killed three terrorists. US-led international forces later assisted in the evacuation of casualties and in setting up perimeter controls.

The claim by ISIS-K needs to be taken with a pinch of salt since the real perpetrators could be wholly unconnected to ISIS. Years ago, it was well known that the ISIS did have a small cadre of loyalists inside Kashmir. They have tried to exploit the unrest in Kashmir against India in the past. However, apart from macho photo ops holding ISIS flags and weapons, these so-called Kashmiri ISIS had never been involved in serious acts of violence against security forces in Kashmir. Thus a name with links to India, Kashmir struggle, repression of Kashmiri Muslims fits inconveniently to suit wider power plays by Pakistan and its intelligence agencies.

Following the attack, the official Taliban Spokesperson, ZabihullahMujahid had tweeted that the Taliban had nothing to do with the attack. The official Afghan government in Kabul had blamed Pakistan and its ISI for having got the Taliban to press ahead with the attack through its new ally – the Haqqani network. Government sources in Kabul claimed that the Haqqanis were keen to target the Indian Embassy in Kabul, but finding it heavily guarded, chose the Gurdwara complex instead. This Gurdwara in the KarteParwan area of Kabul is the lone surviving one of the eight Gurdwaras that existed in Kabul before civil war broke out in 1992.

At the Doha signing ceremony on 29 February 2020 between the US and the Taliban (insisted on being referred to as the Islamic Emirate of Afghanistan (IEA) with the US insisting on a weak codicil to the agreement, that it does not officially recognise the IEA fooled no one!), the Pakistan Foreign Minister Shah Mahmood Qureshi had whispered darkly to the Secretary of State, Mike Pompeo that the US ought to be wary of “spoilers” who could torpedo the whole game plan. Though he did not spell out who such “spoilers” could be, it is assessed that he may have been referring to either of these three or all of them together: ISIS-K (mostly Pashtun Sunni Muslims who returned from Syria after ISIS defeat there), remnants of al- Qaeda and the Tehreek- e- Taliban, Pakistan.

These militant groups, though small, have tasted blood and their leaders want a share of the post-US withdrawal pie, too. There are also many in the various factions, tribes, warlords etc., who form the current ruling elite in Kabul and profit immensely from the chaos of the war- drug running, protection rackets, military contractors and so on. Any or all these players could have easily found someone for the right price to throw a spanner into the peace process by engineering a major security incident against a weak soft target with plausible deniability built into the operation from the start. The poor, marginalised Afghan Sikh community happened to fit the bill and paid the price in blood.

The Sikh community sprang up in Afghanistan having been brought in by the British during their colonial rule over Hindustan. Over the centuries these Sikhs prospered as traders, bought properties, monopolised the currency trade business along with the Hindus. At its peak, there were over 80,000 Sikhs in Kabul. Their numbers plummeted once the civil war began in 1992. Today their numbers are a pale shadow of those pre-civil war days. There are today about 1200 families comprising around 8,000 people. These are scattered in small groups in Kabul, Jalalabad, Ghazni and Khandahar. They speak Dari, Pushto, Hindi and Punjabi- their mother tongue. They faced a lot of persecution during Taliban rule that included wearing yellow patches on their dress, yellow flags on their shrines and houses. One of their most vexing problems is the availability of cremation grounds. Muslims abhor the burning of dead bodies, believing in burials instead. Cremation grounds controlled by Sikhs and Hindus over hundreds of years have been taken over by local Muslims. So much so, dead bodies are being sent to Pakistan for cremation.

In the weeks ahead more details would emerge. The Kabul attack on Sikhs mirrors the 1 July 2020 attack on a Sikh delegation by DAESH at Jalalabad. In that incident too, the terrorists had targeted a group of 10 Sikh community leaders going for a meeting with the then Afghan President. The small population of Sikhs have always been at the receiving end of collateral damage in the Afghan wars.