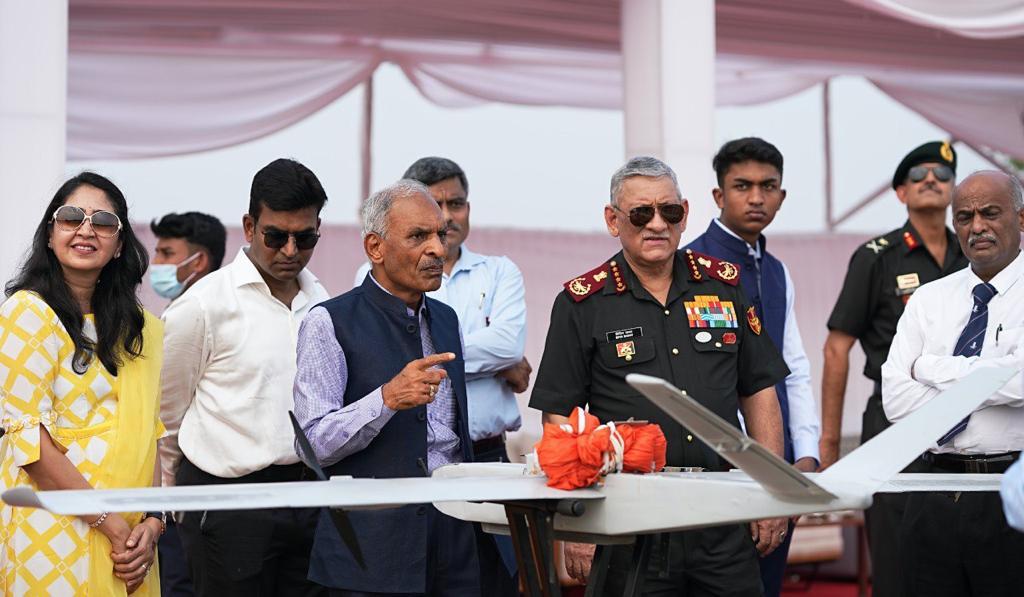 Solar industries Ltd, a Nagpur-based Explosives and ammunition company today announced that it has successfully demonstrated its prototypes of Weaponised Drones (Hexacopter) and Loitering Munitions and become the first Indian firm to do so.

In a press note issued this afternoon, the company, already a world leader in packaged explosives and accessories, Solar Industries said it is developing an array of drones for ammunition delivery to bring a new capability to Indian armed forces. Solar Industries manufactured drones can be used in both offensive and defensive roles, it claimed. India’s Chief of Defence Staff (CDS), Gen Bipin Rawat was present at the first demonstration carried out at the company’s Nagpur-based facility, the note added.

The company press statement further added that its offensive drones will be capable of dropping specially designed warheads on specified targets and returning to base. They are used to target enemy troops, bunkers, vehicles and tanks.

Solar Industries and its fully-owned subsidiary, Economic Explosives Ltd (EEL) is working in a mission mode with an aim to start production of these drones as early as in January 2022.

EEL Warheads can also be integrated with drones of other manufacturers. In a parallel development, Solar Industry’s drones in a defensive role (an Anti-Drone System) will be capable of capable of ‘Soft Kill’ using RF and GNSS Jamming system and a ‘Hard Kill’ option using Micro-missiles.

Micro Missile System is the most reliable Hard Kill System, which has been developed in-house by EEL. So far in India, EEL is the sole developer for such a capability.

The company has also embarked on manufacturing Loitering Munitions for use by the Indian armed forces.  A loitering munition (also known as a suicide drone or kamikaze drone) is a weapon system category in which the munition loiters around the target area for some time, searches for targets and attacks once a target is located. Loitering munitions enable faster reaction times against concealed or hidden targets that emerge for short periods without risking high-value platforms like aircraft close to the target area, and also allow more selective targeting.

Loitering weapons worldwide have been developed for roles ranging from relatively long-range strikes and fire support down to tactical, very short-range battlefield systems that fit in a backpack. India is so far dependent on this specialized munition only through the import route. Solar Industries will be the first Indian Company to fully indigenize and develop Loitering munitions in-house. It is making several versions of the munition primarily LM-0 (1.5 kg, 15 km), LM-1 (4 kg, 25 km) and LM-2 (10 kg, 100 km).

These Indian made munitions will not only be superior to the imported contemporaries in technical features and specifications but will also be almost 40 per cent cheaper. The timeline set by Solar Industries to complete this challenging task is February 2022. Large infrastructure for production, testing & evaluation of these systems is being set up in Solar Industries based in Nagpur.

It has one of the largest production facilities for HMX & its compositions in the world. So far India was dependent on imports of these products but thanks to Solar industries, these items are now being exported to many countries including the USA, Europe & Israel. In the year 2010, the company forayed into the field of Defence and became the 1st Private Company in India to produce a complete ammunition range. It also entered into the field of testing and became the first to develop a World-Class Facility in the country to determine the shell life of ammunition and energy materials based on Isothermal Micro Calorimetry (IMC) revolutionizing the existing procedure to save crore so f exchequer money and prevent Ammunition related accidents.