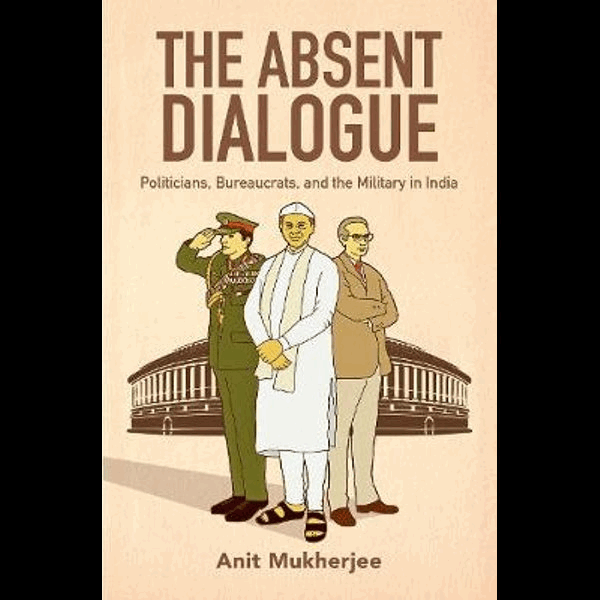 The Absent Dialogue Politicians, Bureaucrats, and the Military in India

An uneasy past characterises the fabric of civil-military relations in India. For most of it, what mires the relationship is an absence of communication between the political leadership, military and bureaucracy. The overwhelming obsession with keeping the military establishment subservient to the political authority has overshadowed any constructive engagement between the three prime stakeholders. The disastrous Sino-Indian conflict of 1962 witnessed political interference even at the operational level. The state of distrust has prevailed, fanned by military coups in South and Southeast Asia. The possibility of losing our democratic model to a military rule, should the military be given greater space in decision making in peacetime, has clouded the thinking of Indian political leadership.

Anit Mukherjee, the author, is amply qualified to address the issues of concern. His early years were spent in a fine regiment of the Indian Army, and his scholarly career gives him the ability to remain objective while sieving amass of information obtained through research and interactions.

Central to the narrative of the book is Mukherjee’s claim that that the Indian civil-military relations compromise the effectiveness of its armed forces. He focuses on five key variables in illustrating his stance. These include weapons procurement, jointness of three forces in operational employment of their resources, professional military education, promotion policies, and defence planning. The reason for the drag in civil-military relations having been allowed to continue to remain is because of three reasons: lack of existential threat, low salience in electoral politics and a reluctance to change, according to the author.

The author’s view of lack of existential threat is, however, debatable given the Chinese incursion in Dolam, their build-up in the South China Sea and the Belt and Road initiative; especially the China Pakistan Economic Corridor. Also, the increasing belligerence of Pakistan and its nurturing of terrorist establishments as strategic partners of its armed forces to offset the asymmetry in conventional military capacities, vis-à-vis India

The author starts his discourse by visiting established theories of civil-military relationship, primarily the postulates of Samuel Huntington Stephen Cohen and Eliot Cohen on issues about the appropriate level of military autonomy keeping in view civilian expertise of the military domain, institutional structure in the shape of a ministry and attributes of military effectiveness. The book analyses the history of civil-military relations in India by assessing the effectiveness of the military in various wars since its independence and the Prime Ministers who were leading the country at those hours. Beyond the Prime Ministers, former defence minister of state during Rajiv Gandhi’s tenure, Arun Singh’s role is mentioned in greater detail, and deservedly so. He created the Defence Planning Staff in 1986, an integrated office with service officers and civilian counterparts. The organisation undertook the preparation of Perspective Plans, and was, perhaps ambitiously, also tasked to carry out threat analysis, own objectives, evolve military aims and recommend balanced force levels. Arun Singh has probably been one of the few leaders who had an understanding of defence issues, with only Parrikar making the effort to get an insight to come to grips with its complexities, thereafter. Both Arun Singh and ManoharParrikar owe their success to the rapport they were able to generate with the Service Chiefs.

Mukherjee focuses on the five key variables that decide on military effectiveness. The false promise of self-reliance is how he titles the first of the Chapters quite explicitly reflecting his assessment of DRDO and R&D establishments. He also alludes to the culpability of political parties, across the spectrum, in skimming defence deals, irrespective of the source from which they are procured. The Bofors deal was the first to make waves, slowing down the bureaucracy’s decision making, thereafter. That it took 30 years for the country to procure another artillery gun after the Bofors storm bears testimony to the author’s stance.

The next issue that the author grapples with is jointness – ‘to plan, train and operate in a mutually reinforcing manner’. At independence, the limited exposure of military officers in major operational and related areas was a handicap. There are two approaches two jointness. The first one is through coordination and the second one is by integration. The latter is advocated and practised by most modern armies to maximise military effectiveness. The preferred option of the services has generally been coordination, thereby retaining maximum autonomy, turf, and importantly, command and control. The author analyses the various wars since 1947 and dwells on the euphoria of victory in the 1971 Bangladesh War that swept away the lessons learnt. Victory turned out to be a ‘terrible teacher’. Adding to an already skewed state is the issue of our military training – a single service approach seems to pre-dominate. Absence of civilian expertise has also hindered jointness.

In certain ways, recent events have overtaken the author’s narrative, though his analysis remains relevant. The CDS has been appointed and the Ministry of Defence has been bifurcated into the Departments of Military Affairs and Department of Defence. Though these momentous changes have been instituted, it remains to be seen how far the bureaucracy will cooperate in allowing the new office to stabilise and usher in jointness and a greater role for the CDS in his advisory capacity to the government.

The next factor attended to in the book concerns training. The military institutions and training curricula are primarily focussed on training in military affairs. Over the years, the National Defence College and College of Defence Management have come up. The Chiefs of Staff Committee had recommended a Defence University in 1967, however, as yet, the institution has not shaped up. There is no permanent civilian instructional staff at the Army’s War College. The author recommends a partnership between civilian policymakers, academia and the military to reorient professional military training.

Promotion is an all-important constituent of military effectiveness and in most developed democracies it remains the prerogative of the government to select top military leadership. In the Indian case too, a similar approach is followed and the government of the day has gone beyond the seniority clause in nominating officers for apex leadership appointments in the services; though with stringent criticism is often encountered. The threat which such an approach poses is the politicisation of the armed forces. Meritocracy, not seniority is the preferred argument by governments, however, there is a case for clear criteria for determining meritocracy. The author settles for more research on the issue.

The author views the creation of the Defence Planning Staff (DPS) as the most important experiment that got military planners and financial experts under the same roof. However, Arun Singh’s resignation led to the organisation being side-lined. The Kargil War triggered defence reforms. The offices of Defence Acquisition Council, Defence Procurement Board and the Director-General Acquisitions were created. The Defence Planning Staff was incorporated in the Headquarters Integrated Defence Staff allowing for the integration of common needs of the three services. However, the appointment of a CDS was not undertaken leading to an anomalous situation. The author identifies the absence of civilian expertise, institutional designs that lead to silos with the Ministry of Finance controlling the MoD, which in turn controls the service headquarters and defence plans including Long Term Integrated Perspective Plans being generated by military officers serving on a limited tenure basis, as some major flaws.

Before concluding his book the author attempts to summarise his views on the three primary constituencies that define civil-military relations. He finds the politicians comfortable without attempting to attune the system for enhancing military effectiveness. One prime example quoted is A K Antony’s eight-year-long tenure as Defence Minister. He drifted all along focussed purely on strengthening his clean image. As far as the bureaucracy is concerned, it has allowed a trust deficit to grow. The military, in turn, has continued to attempt greater say in policy matters but wants to keep civilians out of its domain.

The author concludes that the absent dialogue is primarily because ‘the politicians are unwillingly to engage in one’.

With defence a low salience issue in electoral politics, it recedes beyond the sunset till Dolams and Balakots make defence a rallying point for voters at large. However, as the nation develops its sinews to serve as one of the pivots of stability in the region, a confluence of essential ingredients of national power is called for. Growth of our geopolitical influence has to be based on sound military capabilities. The imperatives for a synergetic civil-military relationship have never been more. The author’s book can serve the stakeholders concerned in undertaking both introspection and also in coming together to find suitable institutional reforms and processes. A lot can be achieved, even at a trot, if turfs, egos and fears of coups are thrown out of the window and constructive engagement between the stakeholders is fostered.