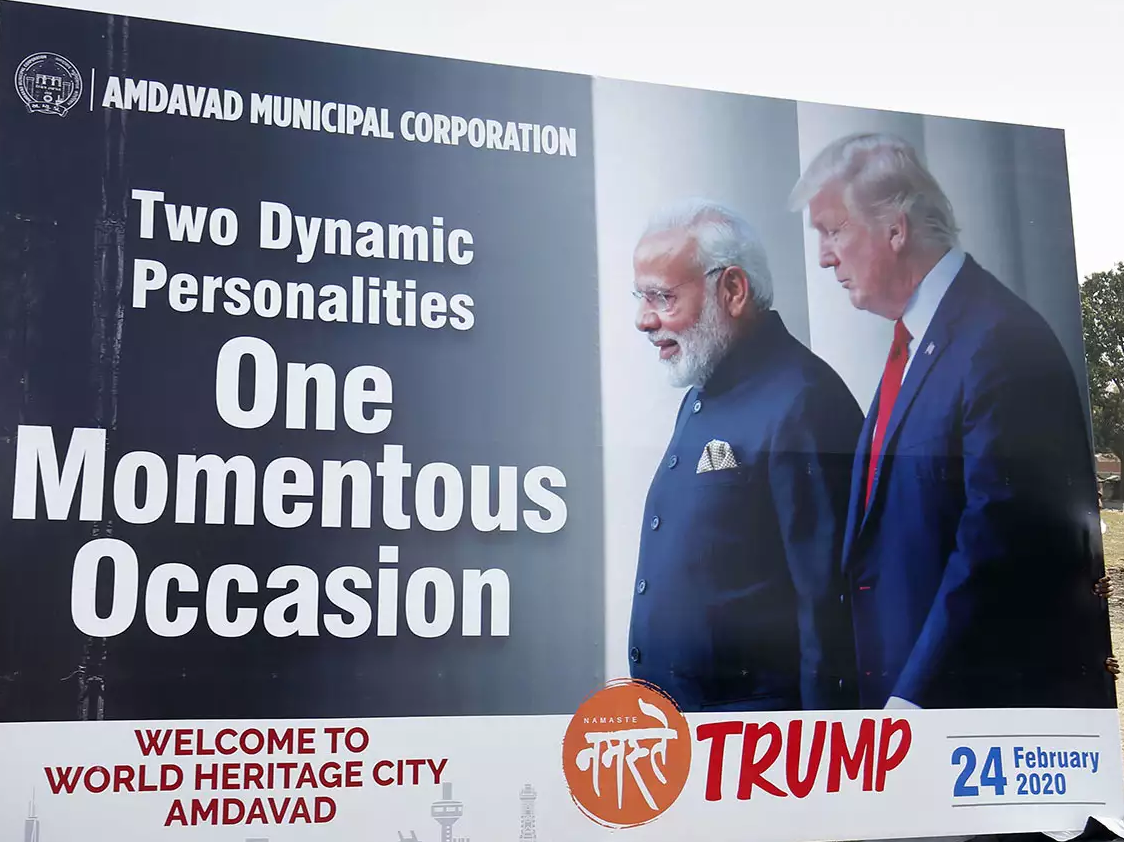 The US India strategic partnership is based on shared values of democracy, common geopolitical interests, mutual respect and understanding, and marked by warmth and friendship between the political leadership and its people.

PM  Modi and President Trump have met eight times in the last three years, of which they met bilaterally four times in the last year, alone. That, President Trump, has chosen to visit India, in a busy election year, when Presidencies are focused on their campaigns and domestic agenda, is an indicator of the level of mutual comfort and trust between the leaders.

This visit may have more political and optic overtones than economic, but that does nothing to take away the bilateral significance of the visit, as well as the significant progress made in the areas of strategic importance like defence, counter-terror, security, oil & gas and trade ties with a reducing trade imbalance.

The key takeaways from the visit would probably be in the fields of Defence, Space and Security.

The deepening of the defence ties between the two nations has witnessed steady progression with the Defence Trade & Technology Initiative (DTTI), 2+2 dialogues, increased frequency of military exercises (India does more military exercises with the US Armed Forces, than any other nation) moving from the annual YUDH ABHYAAS series to TIGER TRIUMPH – a tri-services joint exercise facilitated by the signing of the LEMOA and Communication, Compatibility & Security Agreement.

It is expected, that TIGER TRIUMPH tri-service exercise with India will become an annual event and it is a vindication of the India’s emergence as the strategic partner of US not only in the region but outside of NATO, as the only nation to have been given the status of major defence partner, to whom the US has consented to share sensitive military technologies, weapons and equipment – in no small means catalyzed by the STA-1 status that India enjoys.

China, being the elephant in the room, the renaming of the PACOM as the Indo-Pacific Command is reflective of the growing strategic stature of India in US military strategy and for the enforcement of the free and open, rules-based international order in the Pacific region.

There is a convergence of interest for India and US to limit the Chinese influence in the South Asian and ASEAN region. India has assiduously cultivated maritime security alliances with Japan, Vietnam, Indonesia and Singapore in pursuit of a free to navigate the Pacific and Indian Ocean region and limiting the Chinese influence in the South China Sea.

A free democratic and emergent power India is the ideal counterweight to an authoritative and expansionist China and this balancing of the two Asian powers is reflected in the formation of the QUAD of India, US, Japan and Australia. The recognition of India as a Strategic Partner is an outcome of the designation of China as a competitor by the present Trump administration.

The US pivot to Asia precedes the Trump Presidency – and the focus on India, from President Bush to Obama and Trump. It also highlights the bipartisan support that India enjoys on Capitol.

The defence trade between India and the US has moved from a few hundred thousand dollars to approx. $20 billion. The visit is likely to result in the widely anticipated sale of 24 MH60R helicopters for the Indian Navy and the six Apache helicopters for the Army Aviation – both deals having been years in the making.  However, with the present administration pulling out all stops – the anticipated sale of NASAM-II system, 30 armed Sea Guardian drones, six more P8I aircraft with advanced onboard communication and surveillance systems and 13 Mk45 naval guns.

The cherry on the cake will be if the Indian Navy opts for FA 18 Super Hornet Block III, though the multi-role aircraft for IAF, with both Lockheed Martin and Boeing throwing their hats in the ring, may take more time than anticipated, riding on the back of the sluggish economic growth.

The only threat to this otherwise thriving partnership could come from the potential acquisition of the S400 missile system by India – though the US has shown flexibility in the past in accommodating key Indian strategic interests such as the Chabahar port for the sea-land route to Afghanistan, support during Doklam crisis and the abrogation of Article 370, besides diplomatic support to Indian counter-terror initiatives; the S400 deal with Russia could test this resolve.

Energy has been an area of increased cooperation between India and the USA, and the energy exports to India from the USA (both oil and gas) have registered an impressive growth of nearly $8 billion and may touch $10 billion, with Petronet LNG ($2.5 billion) and other companies, investing a total of $4 billion in the US. The US has also contracted 9 million metric tons per annum of LNG. This has helped bridge the trade deficit and has the potential to meet the ever-growing demands of energy in India – both conventional and non -conventional sources, including nuclear energy as a part of the clean energy initiative of the Government.

Space is an area which has witnessed slow yet steady cooperation of ISRO with NASA, with the space agencies building the strategic NISAR satellite at an estimated cost of $1.5billion for studying the hazards, environmental change and natural processes. NISAR will be launched aboard an Indian launch vehicle in Y2022. India and USA have been collaborating on space missions, and space crafts have carried their scientific instruments. The confirmed discovery of water on the south surface of the moon is credited to Chandrayaan 1 which carried a NASA probe.

There is considerable scope for the Indian and US Space industry to work together leveraging their complementary strengths – marrying frugal Indian space engineering and lower costs of material, supply chain and production, with the cutting edge technologies of US firms.

India and USA could potentially collaborate on the planned Indian space station as the ISS retires by 2030 and India’s planned space station is in place by that time. There could be planned human space flights as this is an area of interest for both the nations.

With all the good tidings, there are drags and challenges, to the growing partnership. Apart from the US Administration’s desire to see India and Pakistan engage more bilaterally, more so because of the Afghanistan peace deal to be announced on February 29th and the impending withdrawal of the US troops and the recent offers of mediation, the US would like to see greater involvement of India in Afghanistan. PM Modi has ruled out boots on the ground and has reservations on the role of Taliban in the new Afghan dispensation, which could embolden terror outfits in Kashmir. However, India could support the new Afghan Government in terms of lines of credit, infrastructure projects and trade through the Chabahar route.

Trade is a major challenge in the US – India bilateral relations. The US-India trade grew at 10 per cent annually for the last two years and crossed $160 billion last year. The trade deficit – something that the present administration has constantly focused on – has narrowed by 9 per cent. Historically, India has had a trade surplus but the status is changing. To quote an example, the U.S. goods trade deficit with India was at $20.8 billion in 2018; a 9.0 per cent decrease ($2.1 billion) from 2017 figures.

Bilateral investment has room for much improvement and Indian companies have invested almost $18 billion in the US. Similarly, US companies in India have large capital outlays in India. Major US companies as Google, Microsoft, GE, Honeywell, Boeing, Lockheed Martin and Collins Aerospace have technology centres and joint ventures in India which have contributed to both the economies

The list of requests from the US Trade Representative is long concerning access to the Indian markets, single-brand retail, medical devices (reduction of duties /higher margins), pharma, insurance, banking and financial services. Higher FDI limits in the sectors not permitting more than 49 per cent FDI, data localization, IPR protection, and e-commerce issues, have in the recent past been a bugbear for both Lighthizer and Goyal. India may have its share of issues such as the H1B visas for Indian technology giants, higher tariffs on aluminium and metals, and the withdrawal of the GSP privileges.

President Trump has often quoted Indian tariffs and barriers, as an impediment. It is true that the US may be a more open market than India, but it can be said, that Indian tariff structure is WTO compliant with Japan and South Korea levying a higher tariff on certain goods. Apart from Harley and Ford, there is scope for early outcomes in food, dairy, pharma, medical devices and IPR protection in trade talks between the two democracies.

Undoubtedly, these are barriers to entry and do not make for ease of doing business, but the way forward could be by breaking down the problems into milestones,dividing their mutual interests into smaller segments, than to attempt a large all-encompassing deal that has been long in the making.

There is enough scope to work on this and the trade relationship between India and USA is not a 100 meters dash but more akin to a long-distance marathon, where not stamina alone but technique, even pace and focusing each mile at a time ensures success.