The Admiral provides an account of naval facilities China is promoting among littoral states of the Indian Ocean, or constructing on disputed islands; its economic linkages with African nations and even in the Pacific, and also the growth curve of the Chinese Navy to provide the details of the mosaic required to be kept in view while analysing the trajectory of Chinese geo-strategic intent.

The opening paragraph of Part I of this two-part piece on China’s ‘Active-Defence Strategy’ emphasised that much thought needed to be given to the possible politico-military circumstances or happenstances under which the Government of India might realise and decide that a given Sino-Indian military build-up, stand-off or confrontation was no longer a mere skirmish between their respective armies — whether or not supported by their respective air forces — but one in which the Republic of India in its entirety was engaged in Armed Conflict against the People’s  Republic of China. Within the context of these circumstances — themselves a matter of both conjecture and debate — this article represents an attempt to initiate an analysis of contemporary Chinese military strategy, using the concept of ‘Reach’.

Part One had introduced a few facets of China’s geo-economic and geo-strategic imperatives that shape that nation’s geopolitical drives. It also presented the overarching concept of ‘Reach’ as an aid to understanding the international import of China’s military strategy. This (second) part seeks to advance an understanding of these issues and, in emphasising the factor of ‘temporal strategic-surprise’ (in contrast to ‘spatial surprise’), offers clues to an understanding of the links between China’s military strategy and her geopolitical international game-moves — being played out within an predominantly maritime paradigm.

Part One had concluded with the statement that contemporary China is executing a geo-strategy that will enable her to assure her geo-economic needs. As in the famous Chinese game of ‘Go’ — perhaps a more apt analogy than chess — the People’s Republic is putting in place the pieces that will shape her desired geopolitical space.

It is this very geo-strategy that then-Lt Col Christopher J Pehrson, USAF, had, in his 2006 dissertation written at the US Army War College, termed the ‘String of Pearls’. This expression, first used in January 2005, in a report to US military officials prepared by the US consulting-firm of Booz-Allen Hamilton, rapidly caught the world’s imagination. Pehrson posited China as a slightly sinister, rising global power, playing a new strategic game, as grandiose in its concept, formulation and execution as the “Great Game” of the 19th Century. Despite vehement and frequent denials by the Chinese leadership of any such geo-strategic machinations designed at the assimilation of enhanced geopolitical and geo-economic power and influence, the expression rapidly embedded itself into mainstream consciousness. 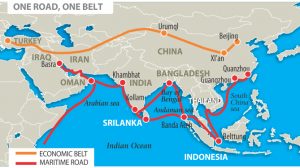 The net result was that for over a decade, China has chafed under the opprobrium heaped upon it for a concept that (to be fair) it had never once articulated. However, in a brilliant re-branding exercise by Beijing in 2014, the world’s attention is being increasingly drawn away from the negative connotations associated with the phrase ‘String of Pearls’ and towards the much more benign-sounding ‘21st Century Maritime Silk Route Economic Belt’, also known as ‘One Road One Belt’.

It is this author’s belief that while this is certainly an alternative and far more acceptable term or expression, it nevertheless covers essentially the very same geo-strategic maritime game-plays that Colonel Pehrson explained a decade ago. The new expression emphasises trans-regional inclusiveness and evokes the romance of a shared pan-Asian history with the implied promise of a reestablishment of the economic prosperity that the Asian continent’s major civilizational and socio-cultural entities, namely China and India, enjoyed until the 18th Century.

Each ‘pearl’ in the ‘String of Pearls’ construct — or in more contemporary parlance, each ‘node’ along the ‘Maritime Silk Route’ — is a link in a chain of Chinese geo-political and geo-strategic influence. It is by no means necessary for a line joining these pearls/nodes to encompass China in one of the concentric ripples typified by the Island Chains strategy. 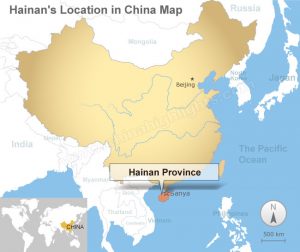 In fact, since the ‘String of Pearls’ (or the ‘Maritime Silk Route’) is a true maritime construct, it is highly unlikely that they would do so. Thus, for example, Hainan Island, with its recently upgraded military facilities and sheltered submarine base, is a pearl/node.

Other pearls/nodes include the recent creation of artificial islands in the Paracel and Spratly islands incorporating, inter alia, the ongoing construction/upgrade of airstrips on Woody Island — located in the Paracel Islands, some 300 nm east of Vietnam — as also on Mischief Reef and Fiery Cross Reef in the Spratly Islands. Additional pearls/nodes are obtained through Chinese investments being made in Cambodia and China’s continuing interest in Thailand’s Isthmus of Kra. China’s development of major maritime infrastructure abroad — the container-terminal in Chittagong, Bangladesh, the Maday crude-oil terminal in Myanmar’s Kyakpyu port; the development of ports such as Hambantota in Sri Lanka, Gwadar in Pakistan, Bagamoyo in Tanzania, Beira in Mozambique, Walvis Bay in Namibia, Kribi in Cameroon’ the Djibouti Multipurpose Port (DMP), and the offer to even develop Chabahar in Iran (fortunately checkmated by a belated but vigorous Indian initiative), along with the successful establishment of a military (naval) base in Djibouti — all constitute yet more pearls/nodes. The development of an atoll in the Seychelles, oil-infrastructure projects in Sudan and Angola, and the financing of newly discovered massive gas-finds in offshore areas of Mozambique, Tanzania and the Comoros, are similarly recently acquired pearls/nodes. Even Australia yields a pearl/node, as does South Africa, thanks to Chinese strategic investment in mining in general and uranium-mining companies in particular, in both countries.

From an Indian perspective, China’s new strategic maritime-constructs (by whatever name) are simultaneously operative on a number of levels, several of which are predominantly economic in nature and portend nothing more than fierce competition. At the geo-strategic level, however, the economy is at the apex and at the same time, China’s and India’s greatest strength and greatest vulnerability and, therefore, it is the centrepiece of the policy and strategy of both countries. This is precisely why, as the geographical competition-space between India and China coincide in the Indian Ocean, there is a very real possibility of competition transforming into conflict, particularly as the adverse impact of climate-change upon resources and available land-area becomes increasingly more evident.

I have mentioned that ‘Reach’ has both spatial and temporal dimensions. The spatial facets of China’s geopolitical moves are evident, as illustrated in the preceding ‘String of Pearls/ One-Belt-One-Road’ discussion. However, it is very important for India’s own geopolitical and military analysts to understand the temporal facets of this construct. The terms ‘short-term’, ‘medium-term’ and ‘long-term’ are seldom used with any degree of digital precision. Yet, a nation tends to keep its collective ‘eye on the ball’ in the short-term and, by corollary, tends to assign far less urgency to something that is assigned to the ‘long-term’. This is precisely how strategic surprise may be achieved in the temporal plane. For instance, in China, the ‘short-term’ generally implies 30 to 50 years. This is an epoch that is far in excess of what in India passes as the ‘long term’. Consequently, India fails to pay as close attention to developments in China as she might have were the developments to unfold in a duration corresponding to India’s own ‘short-term’ (2-5 years). This permits China to achieve strategic surprise and this is as true of military strategy as it is of grand strategy and geo-economics.

On the one hand, it should be remembered that these strategic-constructs are not only about maritime-infrastructure projects involving the construction of ports, pipelines and airfields, even though these constitute their most obvious and visibly worrisome manifestation. They are equally about new, renewed, or, re-invigorated geopolitical and diplomatic ties between the People’s Republic of China and nation-states across a very wide geographical swath (including the African littoral and the island-nations of both, the Indian Ocean and the Pacific Ocean). On the other hand, China’s strategic maritime-constructs do have some important military spin-offs as well, which are closely aligned to the furtherance of geo-strategic Reach. Thus, by developing friendly ports-of-call (if not bases), facilities and favourable economic dependencies in the various ‘pearls’/’nodes’, the logistics involved in the event of a requirement to engage in maritime power-projection, are greatly eased.

Supplementing this are the Chinese Navy’s five impressive stores/ammunition-supply ships of the Dayun Class (Type 904) and six underway-replenishment tankers of the Qiandaohu Class (Type 903A). There is also some food for thought in terms of China’s need for ground-control stations to meet her satellite-based needs of real-time surveillance.

Unlike the USA, China simply does not have adequate ground-control/tracking stations within the Indian Ocean to effect requisite ground-control and real-time downlinking of her remote-sensing satellites. This forces her to deploy a number of ships (the Yuanwang Class) for this purpose. These constitute a severe vulnerability that China certainly needs to overcome. One way of doing so is to establish ‘infrastructure’ and ‘acceptability’ along the IOR island-states as also along the East African littoral. This is precisely what China is attempting to do. On the other hand, the principal lack in respect of a Chinese strategy to provide military substance to the country’s geo-economic and geo-strategic reach is in terms of integral air power through aircraft carriers. China is rapidly learning that while one can buy or build an aircraft carrier in just a couple of years, it takes many more years to be able to develop the human, material, logistic and doctrinal skills required for competent and battle-worthy carrier-borne aviation.

For nearly a decade now, China has demonstrated her ability to sustain persistent military (naval) presence in the Indian Ocean — albeit in a low threat environment. Combat-capability is, of course, quite different from mere ‘presence’ or even the ability to maintain anti-piracy forces, since the threat posed to China by disparate groups of poorly armed, equipped and led pirates can hardly be equated with that posed by a powerful and competent military adversary in times of conflict.

Despite the impressive growth of the Chinese Navy and vigour of the Chinese military strategy, China may not, in the immediate present, have the combat-capability to deploy for any extended period of time in support of its geo-economic and geo-strategic reach were the latter to be militarily contested by a major navy. However, as James Holmes points out, if India were to continue to cite shortfalls in current Chinese capability and conclude that it will take the PLA Navy at least fifteen years to station a standing, battle-worthy naval squadron in the Indian Ocean, this would lull Indians into underplaying Chinese determination and the speed of that country’s military growth. This would carry the very real consequent possibility of India suffering a massive strategic surprise.

Is that something that India can afford?

He retired as Commandant of the Indian Naval Academy at Ezhimala. An alumnus of the prestigious National Defence College. In his seagoing career, he has commanded Indian Navy’s frontline surface-combatants on four occasions and has been principal director in the Directorate of Naval Operations at Naval Headquarters, New Delhi.