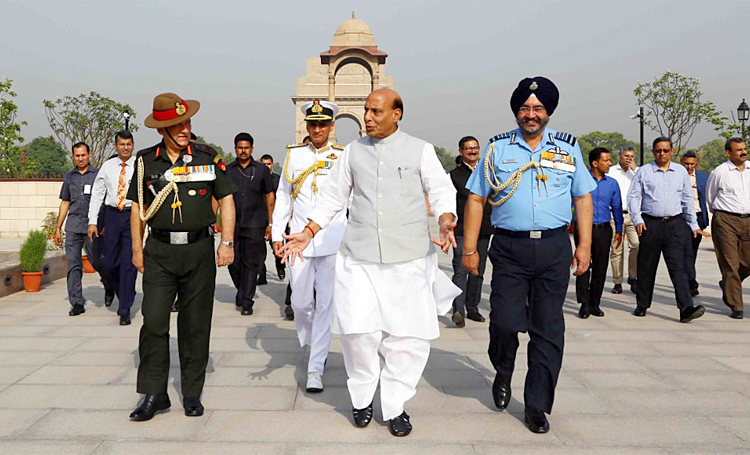 Air Chief Marshal P V Naik (Retired) took over as the Chief of Air Staff on 31 May 2009. Known for expressing his views on issues with clarity, he had written this article in 2015. The Air Force has always often been considered to be reticent about the creation of the appointment of Chief of Defence Staff (CDS). However, the retired Air Chief’s views express a different stance. He also puts forth his views on a host of issues that the decision makers today are possibly contending with, in arriving at the exact status, role and powers of the CDS.

3.3.   Is the present compromise formula acceptable?

Preying on Nehru’s suspicions of Indian Armed Forces, the civilian bureaucracy by an innocuous government note on May 27, 1952, declared the Armed Forces Headquarters as “attached offices” of the Defence Ministry.  In one stroke the bureaucracy divested the Armed Forces Headquarters of policy-making roles like the Government manual of office procedures decreed that while Ministry of Defence could make policy, their “attached offices” merely implemented it. In essence, the decision-making process was to have the benefit of independent inputs from the Chiefs of Staff Committee (COSC), the Defence Minister’s Committee (Service Chiefs were members of this Committee) and the Defence Committee of the Cabinet. These, in turn, signified representation of the Services, mechanism for the bureaucratic processing, and of course political control. The Service Chiefs interacted directly with the Cabinet through the Defence Cabinet Committee.

4.1. Through the Seventies, Eighties and the Nineties, the bureaucracy continued to acquire disproportionate powers vis-à-vis the Service Chiefs. The bureaucracy conveniently points to the “Government of India Transaction of Business Rules”. Framed in 1961 under the constitutional powers of the President of India these documents continue to guide the conduct of business by the Government of India. It is instructive to read the document. Under these rules, the three service headquarters were designated as “Attached Offices of the Department of Defence”, and are therefore placed in a position subordinate to the DoD. The Service Chiefs, as professional heads of the three armed forces and with an experience garnered over a period of at least four decades, found no mention in these rules. The Secretary Department of Defence on the other hand, according to these rules, is responsible for Defence of India and every part thereof including preparation for defence and all such acts as may be conducive in times of war to its prosecution and after its termination to effective Demobilisation. The Armed Forces of the Union, namely, Army, Navy and Air Force, Integrated Headquarters of the Ministry of Defence comprising Army Headquarters, Naval Headquarters, Air Headquarters and Defence Staff Headquarters.

4.2. Sixty-eight years after Independence, it is no secret that the political-military interface is all but absent in India’s institutional setup. The armed forces are completely under the day-to-day as well as policy control of the MoD. The desirable politico-military interface is now reduced to weekly, sometimes fortnightly meetings chaired by the Defence Minister. These meetings are informal, without any agendas or note-taking and have no official status although, in theory, the Defence Minister is deemed to have given policy directions in these meetings! Following Kargil in 1999 the work of the Kargil Review Committee (KRC) is well known. Their recommendations followed the formation of a Group of Ministers (GoM) who came out with some futuristic recommendations. Some major ones are:

More than a decade after these recommendations, many of the decisions except the most crucial one—that of the appointment of a CDS—have been implemented. The CDS envisaged as a single-point military adviser continues to remain elusive mainly because there is no political or military consensus and the bureaucracy is happy to play along.

5.1. Our requirement for India must be seen through the lens of our strategic perspective, our threat evaluation, the future environment over our region and future battle scenarios which include an assessment of our capability build-up. In the foreseeable future, our main concerns will continue to be China and Pakistan and the two front scenarios. We are unlikely to develop large scale autonomous expeditionary capabilities. Our chief requirements would continue to be deterrence against aggression and safeguarding our territory. Non-State actors will continue in Jammu and Kashmir sector. Although chances of war are remote future wars will be hi-tech, short, with high energy, day/night, with high transparency of battlefield and heavy rate of consumption of resources. It will involve rapidly shifting scenarios and use of Remotely Piloted Aircraft will proliferate. I do not envisage Operations away from the mainland. Some Out of Area contingencies, however, cannot be ruled out.

5.2. Successful handling of above scenarios requires quick decisions; a high level of synergy between the Government and military leadership; a thorough understanding of hi-tech and availability of resources to match the pace of battle. All these and many other factors lead me to the conclusion that a CDS in the future will become inevitable. Now it is not like waving a magic wand. You wave and say ‘CDS’ and hey presto there he is. We have to prepare the ground for progressing onto a viable CDS regime. So what do we need to do?

5.3. Integration of the three Services with MoD is the starting point. This is mandatory. If this does not happen we cannot move forward. Governments over the last six decades have ignored this issue. What this has done is that ours is the only country in the world where the Security apparatus functions without military participation in decision making. What is worse is that the benefit of years of Operational experience and advice is denied to the Government. MoD has paid lip service to integration. Nothing has happened on the ground. The bureaucracy is quite happy because they have the ear of the Ministers and any failures or delays can, conveniently, be attributed to the ‘attached offices’. Integration cannot happen overnight. I had suggested to the then Raksha Mantri time and again to start small, let us say at Director Level. Let some Civil Directors work in Service HQ and some Colonel/equivalent Service officers work in MoD. We need to start small and when confidence builds, up to the ante. The next major setback is the total absence of any document concerning National Strategy. Spelling out where we are and where we want to be in 20 years from now. We not only need to define our National Strategy but publish a white paper so the other countries are also aware of our thinking.

5.4. Within the Services, we must set our egos aside and genuinely embrace jointness. We should concentrate on jointness in Intel gathering; Training; Perspective Planning; and, finally Acquisitions, to exploit advantages accruing through economies of scale. We need to train for jointness. We need to create joint billets right from the rank of Major or equivalent. We need to modify our promotion policy to ensure that performance in joint billets has a major effect on promotion.

5.5. A look at most countries shows that the CDS has had to be thrust upon the militaries. For example, the Goldwater- Nichols Act of 1986 of USA which made the most sweeping changes to the US Department of Defense required it to be made law before the military accepted it. Therefore we need to have a parliamentary debate, not only to educate but to iron out differences if any. Now in a democracy, all these things take time. Therefore, the post of CDS would be realistically tenable only 8-10 years from now.

6.1. The USA has global interests. For Operations far from the homeland, the policy of having Theatre commands works efficiently. What this also implies is that each Theatre has to be by and large self-sufficient. This is costly and only a couple of countries could afford it. Similarly, other models of CDS exist. We have to choose a model based on our strategic environment and not blindly adopt foreign models. We must see what improvements our model can provide over the present system. The guiding principle is that policy, resource allocation and setting of priorities must be the exclusive domain of the Central Staff. Individual Services will manage their own Service within the framework centrally set. Something akin to centralised planning and decentralised execution with a policy- oriented CDS or central staff and management-oriented Service staff. This involves striking a delicate balance between the central planning staff and the management tasked Service staffs. Ultimately, however, decisions on the central issues of policy and resources must be taken by the Central Staff. Where the advice of individual Services is rejected, it must be for reasons that are openly stated. There is, therefore, a need to put these proposals to wider debates and discussions so that those who have to ultimately make them successful are indeed convinced of the benefits that are likely to accrue.

6.2. There is an unstated agenda in Army minds that being the senior Service they must get first shot at CDS. There is a discussion on whether it should be a Four or Five- Star rank. Whether he should be deep selected or an outgoing Chief and what should be his tenure. In my opinion, the appointment of CDS should be by rotation among the three Services. I think the selection should be on merit from the serving Chiefs after finishing a minimum two-year tenure. We need to appoint not only the CDS but his Deputy also who could be a Four Star officer. This will reduce the seniority problem and provide a cushion or overlap during the changeover. I think their tenure must be three to five years to be effective. As far as rank is concerned, it must be a Five Star appointment. We keep quibbling about four or four-plus stars for what reason, I do not know. If he has to have control over the Chiefs, he must be five star. There is a misplaced fear of a Coup if so much power is vested in one person. History tells us that while there have been many Coups by Army Chiefs in different countries there is no case of a CDS effecting a Coup.

6.3. Now that we have got the mundane details out of the way let us come to the crux. The appointment of CDS should have the following characteristics:

Lastly, the Importance of Service Chiefs, their freedom and initiative must be maintained with the CDS directing policy and the Chiefs managing within those policy guidelines.

Management of Armed Forces in future will require a CDS type of system. Our strategic imperatives will dictate the type of CDS we need. This would be refined with experience. Whichever model is chosen, I say go all out without compromises like a permanent Chairman of COSC. I would like to end by quoting from an Australian White Paper on Defence, 2000 on how the Armed Forces should be viewed. It states, “The Armed Forces are not only a service provided by the Government. They are part of Australia’s national identity”. Our Armed Forces, too, have, over the last seven decades more than proved that they are a part of the national identity and not just a service.