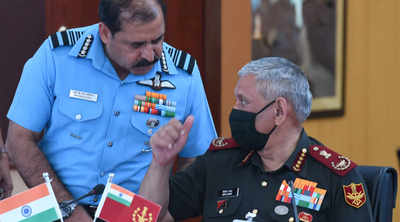 The CDS, General Bipin Rawat, at an event on 2 July, stated that the Air Force must not forget it was a supporting arm to the Army like artillery and engineers, and distinct from the Army’s combatant arms. To any self-respecting air warrior, and others even with a rudimentary understanding of airpower, such statements only reconfirm the CDS’ hidden agenda behind the proposed theaterisation in India, to get all possible forces ‘under command’ instead of true integration and synergy in operations.

The comments of the CDS reconfirmed not only a lack of understanding of airpower and technology but also the scant attention paid to military history. Without a doubt, if the CDS succeeds in ramming through his ill-conceived formulation on integration and theatre commands, an unmitigated disaster awaits the Indian military and the nation in the next major confrontation. Our adversaries must also be drawing great comfort from such statements at the highest level of the Indian military.

A cursory glance through the history of the evolution of air forces the world over after the First World War, as independent and increasingly important combat arms, could have prevented the CDS from making such acerbic and ill-informed comments that put the entire consultative process on the integration of the Indian armed forces, currently underway, in jeopardy. The Royal Air Force in Britain and the Luftwaffe in Germany were already independent in the inter-war years. German emphasis on airpower and innovative employment of the Luftwaffe in the initial phases of the Second World War were later successfully employed by the ones Germany oppressed the most; the Israelis. If it wasn’t for Goering’s megalomania which led to a lack of persistence with airfield attacks, the Luftwaffe may well have won the Battle of Britain since the RAF’s Fighter Command under Dowding was near exhaustion when Hitler and Goering switched over to night bombing of London. The rest is history.

The transformation of the US Army Air Corps into the US Army Air Force and then into the independent USAF would also have been illuminating. The US Army Air Force was created in June 1941 to provide greater autonomy to the air arm and to end the increasingly divisive internal battles over control of aviation doctrine and organization since the Army continued to insist, with its traditional doctrinal argument, that in the event of war, the Air Corps would have no mission independent of the support of the ground forces. General Marshall finally implemented a compromise plan naming General ‘Hap’ Arnold as acting ‘Deputy Chief of Staff for Air’. However, he rejected the latter’s proposed organizational structure thus keeping the air force under the control of Army GHQ.

As just one example of the shortcomings of such structures, even after issuance of a warning on the imminence of war, General Short, Commanding General in Hawaii, insisted on the parking of aircraft close together on the tarmac to prevent sabotage. The orders were against the advice of his air commanders on dispersing them for protection against air attacks. The price was paid at Pearl Harbor on 7 December 1941. Does that sound familiar even after a lapse of 80 years in which aerospace power has revolutionized the very nature of warfare? Fortunately thereafter, the Army Air Force operated more as an independent arm in practice due to the efforts of ‘Hap’ Arnold’ though in theory, it remained subordinate to the Army till it became an independent service in September 1947.

Scant knowledge of historical facts was also evident through the comment that even in 1971, the Navy and the air force operated as ‘component commanders’ to General Aurora in the East and Candeth in the West ignoring the fact that the IAF played the lead role, particularly in the East. As per the CDS, all the operational planning was also done at the Chiefs of Staff Committee level in 1971 and the same system would be followed with the sole addition of the CDS as the permanent Chairman of the COSC.

This brings into question the very need for theatre commands. At the same time, the continued existence of Northern Command, as it is because it is performing its job well, raises questions on how the air force is expected to participate in Northern Command’s surface operations and why the same system is not good enough for the other proposed so-called land-centric commands. In his justification for dividing the limited assets of the air force, the CDS also tried to draw an analogy with the existing division of resources between five operational air force commands. This confirms that he does not understand the principle of centralized control and decentralized execution that has been the operating philosophy of all successful air forces, apart from considerations of the span of control for administration, maintenance and training.

In recent decades, even China has put added emphasis on the PLAAF and PLAN in its reforms and military modernization after diligently studying the Gulf Wars and like. General Xu Qiliang, the ex-PLAAF chief who is largely credited with military reforms, is now the number two to President Xi in China’s Central Military Commission. In his latest visit to Pakistan in August 2020, General Xu is also reported to have emphasized the importance of making the PAF the lead service in future conflicts. Concurrently, there are also reports of some rethinking on the current structure of the theatre commands in the US.

Unfortunately, the CDS also displayed his ignorance on high-tech hybrid warfare with his simplistic sniper solution to counter drones without clarifying why his proposed sniper-solution was not implemented when he was the COAS, or now as the CDS, since the drone threat, even from non-state actors, has been obvious for many years.

With his emphasis on ‘boots on the ground’, it was also obvious that the CDS is still focused on attrition warfare of yesteryears. Such an approach was admitted by General Candeth, on the Western front, after 1971 due to fear of even temporarily losing territory. In the East, it was air supremacy that permitted manoeuvre operations by General Sagat and Group Captain Chandan Singh as also the Para-drop at Tangail. The coup de grace was the air attack on the Governor’s House. Surely, we should have drawn the correct lessons from this great victory by its Golden Jubilee.

Modern conflicts are increasingly high-tech, with innovative non-contact methods and application of force, or threat of use of force, with a focus on cyber, information and aerospace domains. Herein, the unique capabilities of aerospace power including mobility, responsiveness, flexibility, lethality and strategic reach would be decisive even in pre-conflict periods of brinkmanship. Accordingly, I have been suggesting that the integrating structures should be built on strategic and operational considerations and not of ‘under command’.

We just cannot afford such attitudes and approaches that have hindered the efforts at true integration and joint manship so far while other advanced nations have increasingly acknowledged the primacy of aerospace power. Air Chief Marshal Lal had also cautioned against such a possibility soon after 1971. Maybe, we all need to reread our histories better?