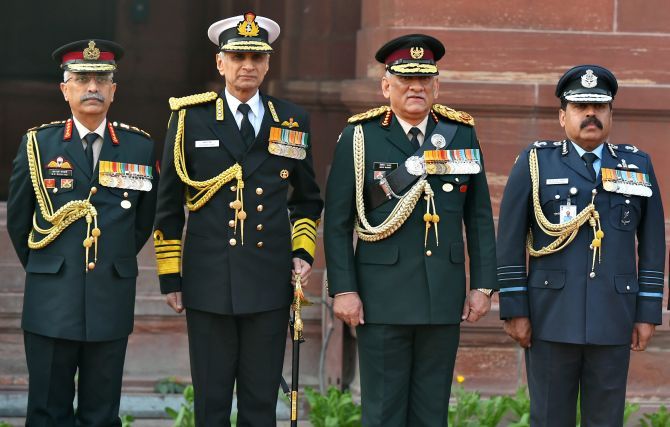 India’s military top brass will once again go into a huddle on Thursday to try and evolve a roadmap for the creation of joint or theatre commands and set timelines for its implementation. To be chaired by the Chief of Defence Staff (CDS) Gen Bipin Rawat, the day-long deliberations are also likely to involve some kind of a scenario building and projection of force employment by proposed theatre commands, informed sources have said.

All the three Service Chiefs, Adm KB Singh, Gen MM Naravane and Air Chief Marshal RKS Bhadauria and their respective Vice Chiefs will be part of the discussions, besides the CISC and senior officers of the Department of Military Affairs (DMA). This meeting comes on the back of recent reports that the DMA will seek approval from the government first for creating the joint or theatre commands before proceeding to implement them in practical terms. Government sources were quoted in two separate reports last week that there is a plan to hastily create theatre commands without proper deliberations.

An intense debate had ensued in military circles last fortnight after a couple of public remarks by Gen Rawat and Chief of Air Staff over the likely role of the Air Force in proposed theatre commands. A flurry of angry articles, analyses and debates on the theatre commands were published, perhaps leading to a rethink in the highest echelons of the government about the wisdom in setting impractical deadlines in announcing the creation of the theatre commands.

Thursday’s exercise is likely to be among the many future discussions to be held across the three services. The creation of theatre commands is seen as the next level of higher defence reforms planned by the government after appointing India’s first CDS in January 2020. However, traditional differences of opinion amongst the three services are seen as an impediment in the early creation of the joint structures meant to enhance the combat potential of the Indian military and make it future-ready.