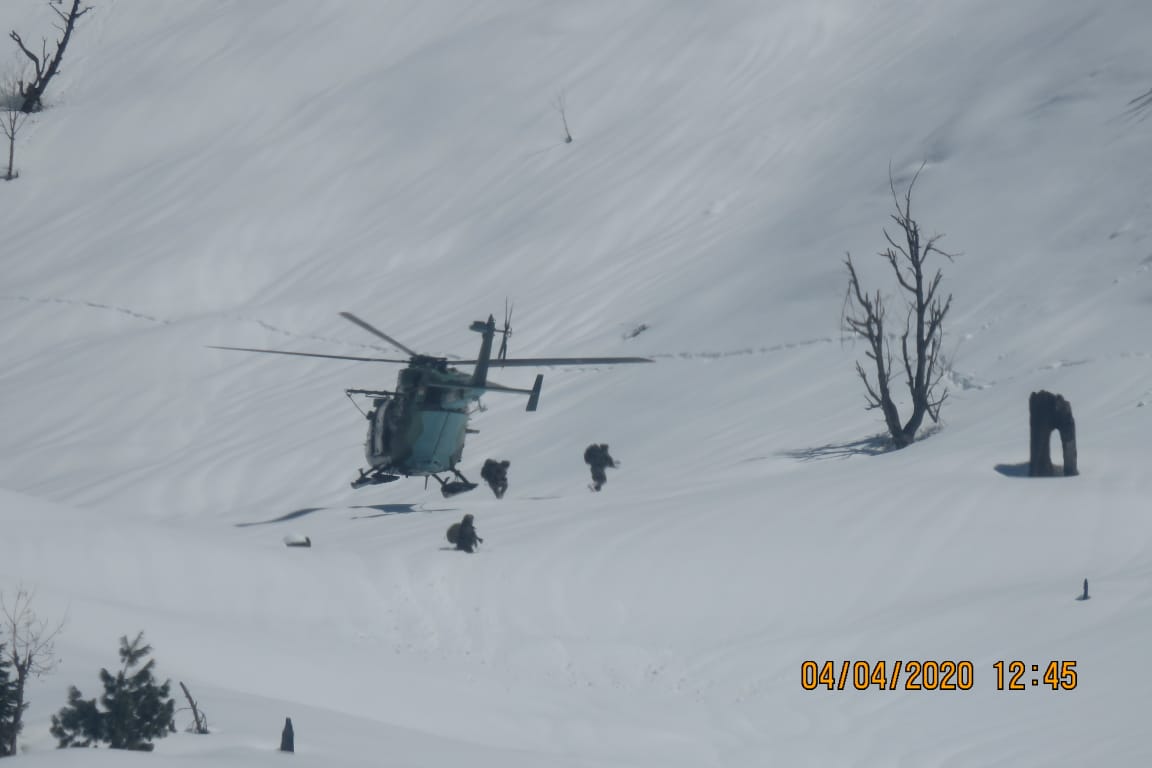 Indian Army is at the frontline of a war against an invisible enemy – the Chinese Coronavirus. Simultaneously, it’s also fighting a pitched battle with the ‘Pakistani Terror Virus’ in Jammu and Kashmir. At least nine terrorists, including five infiltrators, have been killed over the weekend in two separate incidents in J&K.

According to the Indian Army, four terrorists were killed in Batapura, Kulgam of South Kashmir on Saturday and five others were eliminated along the Line of Control (LoC) in Keran Sector, North of Kupwara, on Sunday. The five terrorists are assessed to be a part of a group of infiltrators who had recently sneaked across the LoC and were attempting to take advantage of the bad weather to reach their destinations deeper inside the Valley, the statement added.

In the operation, the security forces lost five commandoes of the elite 4 Para Battalion (SF) of Indian Army who were airdropped off a helicopter as the area was winter cut off.  It was an extraordinary example of hand-to-hand combat in the high altitude snowbound area of Kupwara along the Line of Control in Kashmir.

The details of the encounter provided by the Army reveals that the encounter broke out on the intervening night of 3 and 4 April when a group of terrorists infiltrated from across the Line of Control in Keran sector of North Kashmir. The militants had infiltrated across the Shamshabari ranges and were hiding in a ‘GujjarDhok’ (temporary shelter for nomads) in the Poswal area.

“On 5 April, the commandoes were following the trail of footsteps on the snow. They did not realise that they were on a cornice, which broke and they fell into the nallah (ditch) beneath. As luck would have it, the terrorists were sitting right where they fell.  A firefight ensued at virtually point-blank ranges. Due to superior training of the commandoes, in spite of the fall, they killed all five terrorists. However, the complete squad, five in all, were also killed in action” said a senior Army official.

Operations against Pakistan trained terrorists in Kashmir continue to operate amidst an ongoing lockdown in India, including Kashmir, to combat the spread of the Chinese coronavirus.

The Indian Army is intimately engaged in the fight against the Chinese coronavirus. The Army has opened several hospitals and multiple quarantine camps at its bases in several locations. Evacuees from Iran, Italy, Japan and Wuhan were effectively quarantined.

According to the latest data provided by the Indian Army, a total of 1198incidents of ceasefire violations were reported along the Line of Control (LoC) and International Border (IB) between India and Pakistan, between 1 January to 7 April 2020. 49 terrorists were neutralised during the period. Last year, 3168 ceasefire violations by Pakistan troops were recorded and 152 terrorists were neutralised.

Pakistan Army is trying to divert the attention of its people amidst COVID-19 attack by continuing to use terror as a policy. It is indulging in fomenting terrorism in Kashmir and deploying its troops in Gilgit Baltistan of Pakistan occupied Kashmir (PoK) to hide the State’s failure to fight COVID-19. Pakistan Army has deployed troops across the country, including PoK, to assist civilian authorities in containing the spread of COVID-19. “Troops have been deployed to aid civil authorities under Article 245,” said Maj Gen Babar Iftikhar, Spokesperson of Inter-Services Public Relations (ISPR). The deployment was approved by Chief of Army Staff Gen Qamar Javed Bajwa.

Dr Amjad Ayub Mirza, a PoK political activist alleged that the Pakistani Army is conspiring to force Governor’s Rule to tighten its grip in the guise of combating the Coronavirus.

As the pandemic spreads the Pakistani Army has taken control of the whole country by invoking Article 245 of the 1973 Constitution on 23 March. The Article pertains to the military’s role to assist the government; an exercise in restoring military’s overall legitimacy while simultaneously diminishing the role of Prime Minister Imran Khan.

The Chinese Coronavirus pandemic has caused chaos in Pakistan, but the Pakistan Army wants to keep the Kashmir front open to confuse and distract its populace. The death of elite Indian commandoes will certainly increase the tensions between India and Pakistan. Despite the global pandemic, there are more fireworks in store at the borders.