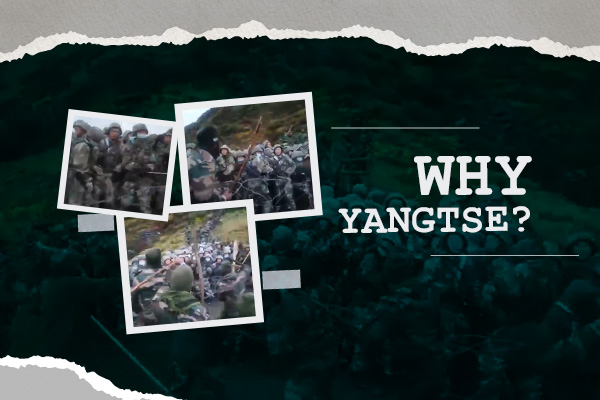 It had to be Yangtse, the Yangtse, which was blessed by Guru Rimpoche, also known as Padmasambhava, the professor of Nalanda University in the 8th century, who introduced Tantric Buddhism to Tibet. The Yangtse, which has the famous Chumi Gyatse waterfalls, also called holy waterfalls, revered by Buddhists on both sides of the LAC dividing India and China in the Tawang Sector, and which has 108 water springs emerging from the spots where Guru Rimpoche threw his prayer beads. The Yangtse, where the grazing rights of the opposing villagers were attempted to be resolved in the famous expedition of Sir Francis Younghusband in the first few years of the 20th Century.

It had to be Yangtse, which was captured by the Indian Army in response to the Chinese intrusion in Sumdorong Chu in 1987. Yangtse has defied habitation for ages, due to extreme terrain and weather. It had to be Yangtse, where Chief Minister Pema Khandu inaugurated a gompa under the Chumi Gyatse waterfalls in July 2020, barely a few hundred yards from the LAC. 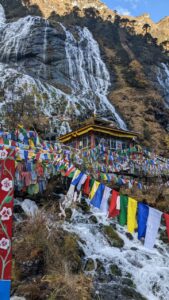 Yangtse is steeped in history, religion, politics, and military strategy and is the most prominent among the eight major flash points on the Eastern LAC. For the Peoples Liberation Army (PLA), Yangtse is perhaps the most sought after feature in the Eastern Sector.

Yangtse is a massive plateau approximately 25 to 30 km northeast of Tawang. It has peaks ranging from 14,000 to 17,000 feet on one side and the holy waterfall at 11,000 feet on the other. In the remote corners of the Yangtse Plateau also grow the famed Brahma Kamals and some rare varieties of rhododendron. It is also one of the most picturesque areas of Arunachal Pradesh. A foothold on the Yangtse plateau affords a more advantageous tactical position to the Chinese military.

The Chinese have already made an all-weather blacktop road to their side of the LAC in the valley below, which is used by the PLA as well as tourists from Tibet and mainland China. It is the grit and determination of the Indian soldiers who not only survive in the inhospitable terrain of the Yangtse Plateau but have also been repeatedly thwarting the PLA’s attempts to intrude and transgress into this sensitive and militarily critical area in the Kameng Sector.

The Peoples Liberation Army is perhaps still smarting from the loss of Yangtse in 1987-88. Combined with the Indian Army’s domineering position over the Sumdorong Chu and the Namka Chu Valleys, the 1962 equations have, in effect been, reversed in the Tawang Sector. The capability development and the infrastructural building on the Indian side have been phenomenal in the past few years, which in turn have very substantially negated the advantageous position the Chinese had in the yesteryears.

In the Tawang sector, the PLA has been forced into a compromised position with the ‘checkmate’ in clear sight. The PLA apparently finds itself relatively weak and militarily inadequate to match the growing domination of the military space by the Indian Army. The repeated efforts to seek dominating positions by the PLA are perhaps a manifestation of this emerging security state and that the Indian Army is confident of thwarting the nefarious designs of the adversary every time is a present day truism on the LAC.