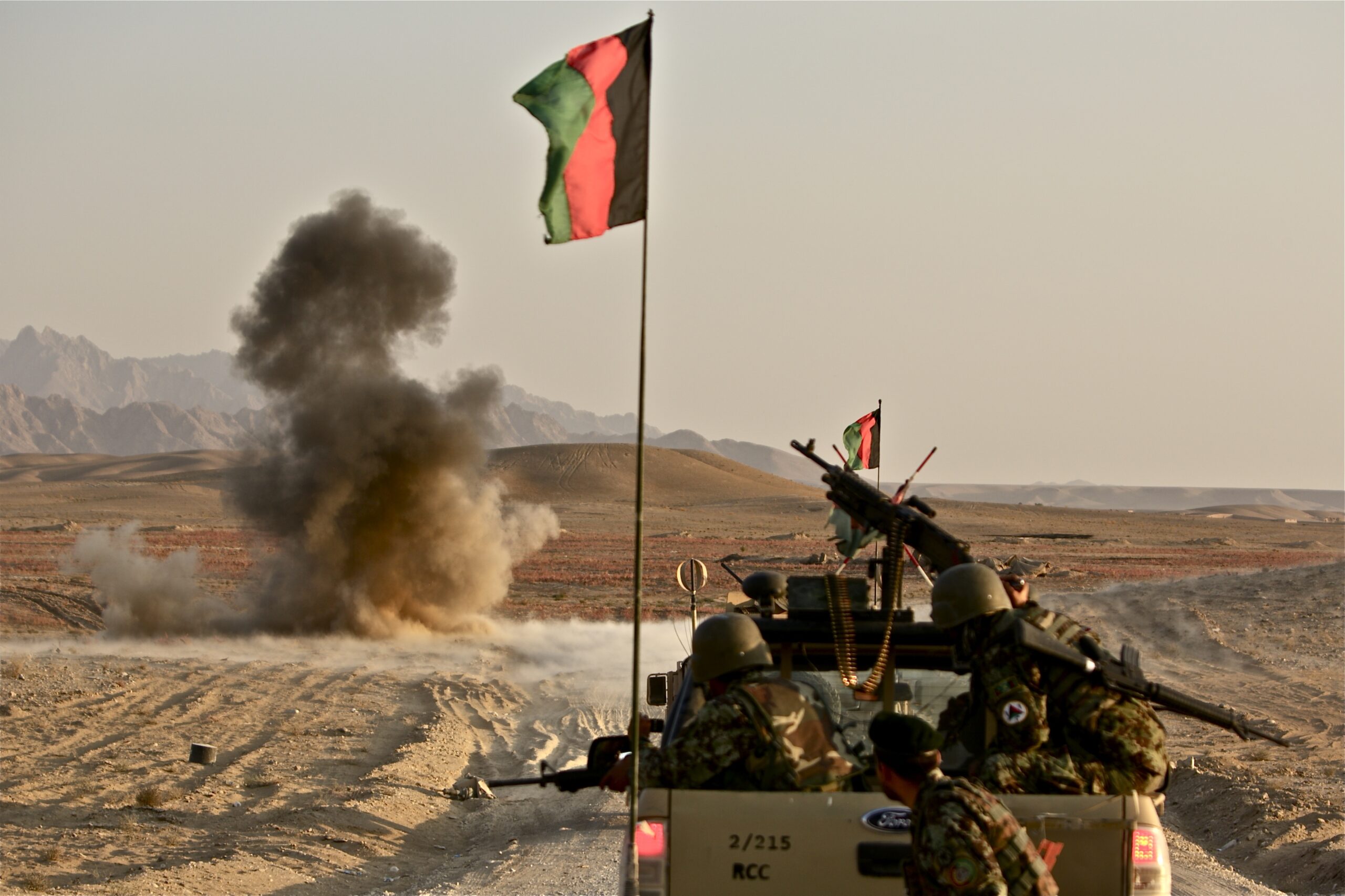 On 3 July, the US forces vacated the famous Bagram airbase, which had been the strongest base for the US counter-terrorism operations across Afghanistan for the past 20 years. The troops of the US Special Operations Force based at this base have carried out relentless military interventions against Al Qaeda (AQ), Islamic State (ISIS), Taliban and other terrorist groups. Taliban and the other terrorist organizations supporting it have also been waging a very effective guerrilla war for the last two decades against the US-led International Security Assistance Force (ISAF) and the Afghan National Defence & Security Forces (ANDSF).

There are three main reasons for the success of Taliban. The first is the terrain to include the snowy and dominating Hindukush and Pamir mountain ranges of the eastern and north-eastern regions of Afghanistan. The rolling hills, rivers, streams along the foothills of the two mountain ranges in the central highlands assist the Taliban militants in waging an effective guerilla war.

The second factor aiding the Taliban has been the cooperation of various other terrorist groups operating in Afghanistan. One of the important reasons for this cooperation is the Pakhtuni Code of conduct. Under this Code, all Pashtuns are expected to forget their mutual enmity and wage war against the external enemy i.e. America and its Afghan ally – the Government of the Islamic Republic of Afghanistan. The principles of this Code are: First, “I against my brother; me and my brother against our neighbour; me and my village against the neighbouring village; my tribe against another tribe; me and my country against another country.”

Similarly, there is another code of conduct based on three principles, first, “melmastiya (hospitality)”; second, “badl (revenge) with no time limits for revenge (in fact, some vow to follow it till the doomsday); and third, “Nanavati” (giving shelter, even if he is your enemy). These codes of conduct and principles have created a culture in the Afghan Society that allows non-Afghan terrorist groups to also operate in that country. They are provided refuge in Afghanistan, under the Taliban’s overall control.

The third major reason is the strong support of Pakistan’s intelligence agency ISI (Inter-Services Agency) to the Taliban, especially the Haqqani network, which is an important component of the Taliban. In fact, some unconfirmed reports suggest that the Haqqani group is overshadowing the Taliban.

The fourth reason is the withdrawal of the American forces from Afghanistan, especially the abandonment of the Bagram airbase, which makes the ANDSF position more vulnerable. The graph below shows the increasing level of violence in Afghanistan from 2014 to 2020. The slight dip in figures for 2020 could be attributed to COVID conditions. 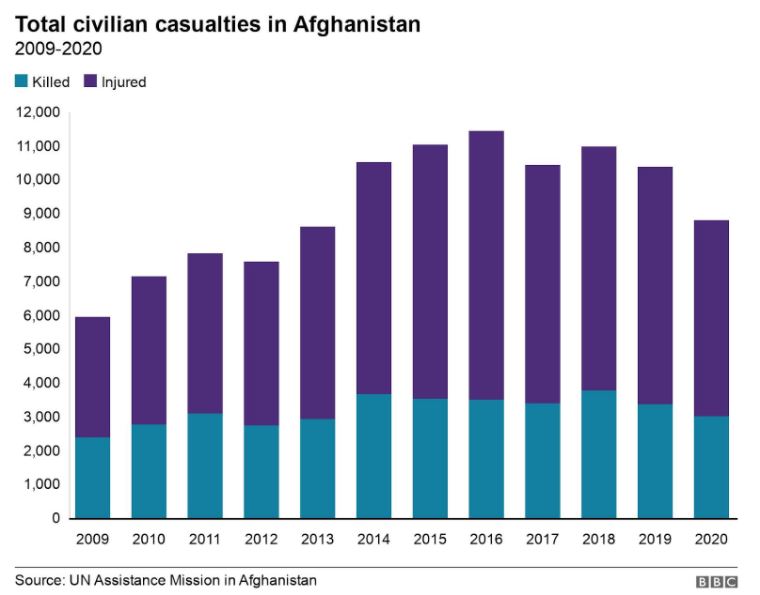 The situation is changing for the worse due to the continued thinning out of the US and the NATO forces. The picture becomes even grimmer if we look at the situation at the border crossing controls through which most external trade along land routes are undertaken. Out of the 12 crossing places, major crossings under the Taliban control include the Sipin Boldak along the Pakistan border, Sher Khan on the Tajik Border and Sheikh Abu Nasr Farahi and Islam Qala on the Iranian borders. Taliban control invariably translates to illicit trade, generating revenue for the Taliban, depriving the Ghani led government of precious resources required to sustain the war. For example, the Islam Qala crossing generates $20 mn per day.

Changing International Equations in the Region
With the withdrawal of troops from the Bagram Base, only 2500 to 3000 American soldiers are left as of now in Afghanistan. Ultimately, the US is likely to leave behind only 650 personnel. As the US troops thin out, the present government of Afghanistan is getting weaker, consequently, the Taliban is claiming to dominate almost 90 per cent of the area in Afghanistan. 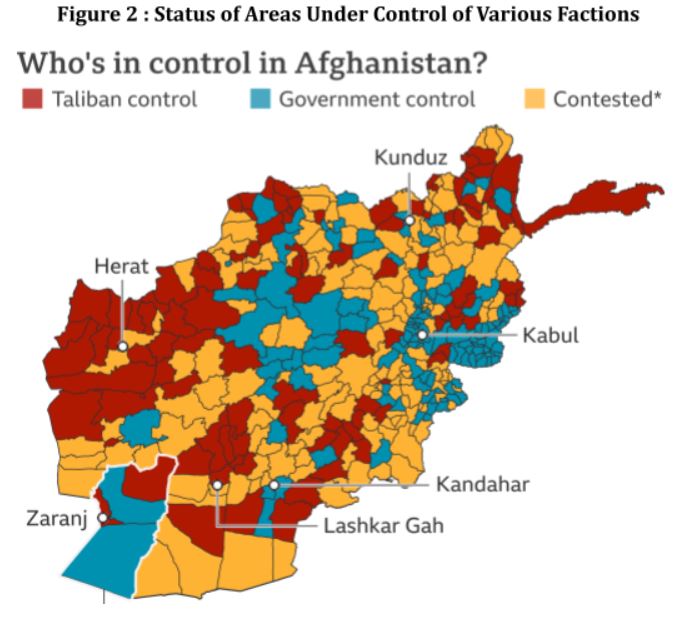 Taliban is increasingly gaining confidence that ultimate power in Afghanistan will soon be theirs. It also explains why the Taliban is inviting China to invest in Afghanistan. Along with this, the possibility of China-Pakistan- Afghan Taliban- Iran coming together has increased significantly. The improvement in Sino – Iran relations is likely to hasten this polarization. This alliance may become even stronger if Turkey and Russia join the group. The emergence of such an equation is fairly high as Turkey enjoys good relations with Pakistan, while China’s relations with Russia are also reasonably smooth. These two countries can become the catalyst in realising this alignment. Hence, one cannot rule out a direct or indirect alignment between China-Pakistan-Afghan Taliban-Iran-Turkey and Russia on Afghanistan.

Having said that, such an architecture of polarization can weaken India’s strength in the region from a military and economic security perspective. What’s worrying is that signals of such polarization are already being given by Russia. It invited China, Pakistan and the US for talks, excluding India on the grounds that India does not enjoy enough influence over the Afghanistan issue. Such a stance by the Russians could not have been imagined a decade back.

India faces the consequences of losing its investment of about three billion dollars in Afghanistan besides, AQIS, ISIS and Pakistani terrorists training their guns on Kashmir if Taliban takes over. Apart from this, a fairly large number of the Afghan population may migrate to India. It should be noted that as per UNHCR, there were about 40,000 Afghan refugees in India till 2019. These figures are only likely to increase given the current security scenario.

Sensing the existential danger to its survivability, the Government of Afghanistan has requested military assistance from India and other friendly countries. Reportedly, India has recently delivered a consignment of 122 mm gun ammunition to Afghanistan, if true, it is a smart move. We should come forward and help the Islamic Republic of Afghanistan as much as possible not only from the point of view of India’s national interest but for the larger good of the people of Afghanistan, especially the women and children who would be deprived of modern education, growth, peace and stability, should the Taliban take complete control of the country.

One may recall that even after the Soviet Union left Afghanistan, the Najibullah government lasted for four years because the Soviet Union continued to provide economic and military aid to it. It was only when the Soviet assistance dried up due to its breakup that the Najibullah government could be defeated by the Taliban. If we continue to provide financial and military aid to Ghani’s government, along with the US, UK, France, Australia and Japan, then the Taliban advance could be stalled.

Possibility of UN Intervention
The Afghan government aided by military assistance from friendly countries in the form of economic, military and intelligence support, may be able to ward off the takeover of Afghanistan by the Taliban. It could lead to a stalemate and a call for UN intervention. China is unlikely to veto the intervention as a stalemate would adversely affect Chinese investments in Afghanistan. For the Chinese, a UN intervention would be a preferred option rather than putting its own boots on the ground. As far as India is concerned, it will have to weigh its options very carefully to participate militarily in such a situation.

India’s options
The rapidly deteriorating internal security situation of Afghanistan is headed towards a fierce civil war. At this juncture, it would not be wrong to say that the future of Afghanistan looks absolutely unpredictable and bleak, and India has very limited options. It would be in our national security interests to prevent the Taliban from taking over Afghanistan as the dominant component of any future ruling dispensation. A government of National Reconciliation is the only viable and peaceful way forward. In order to ensure this, we need to provide all possible assistance (including military aid) to the current Afghan government in collaboration with friendly countries.

The second step would be to prevent Russia and Iran from joining the China – Pakistan – Taliban ruled Afghan polarisation. Tactful diplomatic moves would play an important role in achieving this. At the same time, New Delhi will have to strengthen its hold on the ports of Chabahar and Jask to prevent the ever-increasing influence of China in Iran. Keeping the US position on Iran in mind, we will have to move very cautiously while dealing with Iran.

Perhaps, we need to take a leaf out of the Chinese strategy of ‘Unrestricted Warfare’ and take counter measures in the grey zone for which a strong political will is needed. Cases of Baluchistan, Uyghur Muslims, Tibet, Hong Kong, and Taiwan need to be promoted vigorously while remaining in the grey zone to ensure deniability. Support to the ‘One China Policy’ also needs urgent revision. We also need to expand the QUAD by including France, Britain and other friendly countries of South-East Asia.

India should also encourage Saudi Arabia and UAE (the only two nations apart from Pakistan to have recognized the Government of Taliban 1.0) to use their moderating influence with Taliban 2.0. And finally, should there be a UN intervention in Afghanistan it would be in India’s interest to be a part of it. India still retains goodwill and influence among the Afghan populace, which if properly leveraged, could provide a viable force irrespective of the emerging power equations.