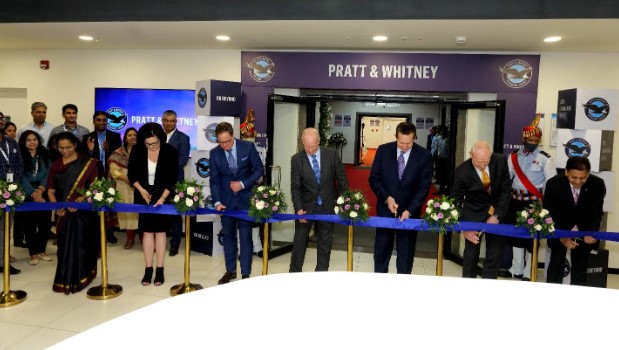 “The Indian aviation market is growing at a rapid pace, and Bengaluru is a hub for that growth,” said Geoff Hunt, Senior Vice President of Engineering at Pratt & Whitney. “The work conducted at the IEC – by some of India’s best and brightest minds – will support cutting-edge technology that will drive the future of flight,” he said.

The facility currently hosts more than 50 employees, with 450 jobs to be added over the next four years. Work performed at the IEC will encompass elements such as aero and mechanical and control systems for various products in Pratt & Whitney’s broad portfolio of large and small commercial engines. It will also extend across the entire product lifecycle from development to field support and sustainment.

With more than 1,500 engines and auxiliary power units in service, Pratt & Whitney has one of the largest footprints for any engine maker in India. Pratt & Whitney’s GTF engines power more than 180 A320neos and A321neos and have delivered more than USD 1 billion in savings to Indian airlines since e entry into service. Other significant investments in-country include Pratt & Whitney’s state-of-the-art India Customer Training Center in Hyderabad and its R&D collaboration with the Indian Institute of Science, Bengaluru.

“I am truly excited about the future of Pratt & Whitney in India and the significant investments we are making towards building a stronger aerospace ecosystem in-country,” said Ashmita Sethi, Managing Director of UTCIPL. “Beyond the $40M+ in financial investment in both the IEC and co-located India Capability Center, we are collaborating with local universities and investing in emerging technology companies to enhance India’s homegrown capabilities further,” she said.

India is important to the global growth and investment strategy of Raytheon Technologies, and the advanced infrastructure and talent pool will help drive the country’s contributions as a global leader in aerospace and defence. Raytheon Technologies provides advanced systems and services for military and government customers worldwide. It has four verticals – Pratt & Whitney, Collins Aerospace, Raytheon Intelligence & Space and Raytheon Missiles & Defence.