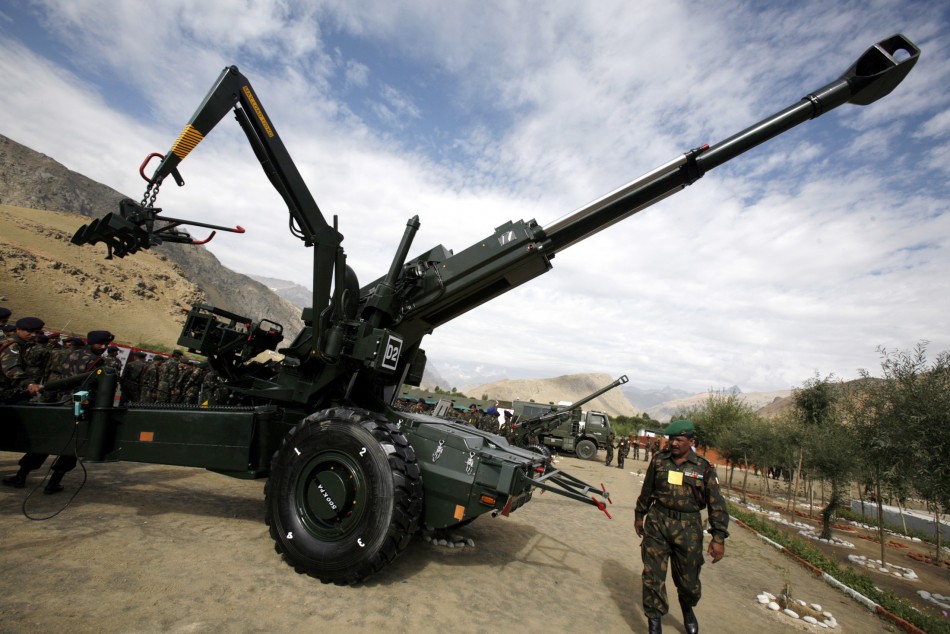 When a nation goes to war it often experiences difficulties in procurement of critical spares and ammunition, with old suppliers often enforcing a denial due to multifarious reasons.

To fight through the fog of war self-reliance is a necessity and every effort needs to be made to make defence indigenisation a success story. It is pertinent to add that turning points in history like the breakup of the Soviet Union caused a difficult situation for our country as the spares were not available for 70 percent of our equipment which were of Soviet origin.

India accounted for 15 percent of the volume of global arms imports in the last five years, more than three times as much as China, according to the new data on international arms transfers published by Stockholm International Peace Research Institute (SIPRI). Between 2005 and 2009, India accounted for seven percent of the global arms imports. The SIPRI data showing New Delhi to be the world’s top arms importer, comes after a claim by IHS Jane’s February 2015 Issue, which stated that Saudi Arabia has replaced India as the world’s largest importer of defence equipment in the world. As per Jane’s, Saudi arms imports in the preceding year was $ 6.46 billion, while India imported $ 5.57 billion. Unlike Jane’s, SIPRI data reflects the volume of deliveries of arms, not the financial value of the deals. It is also pertinent to note that Chinese export of major arms increased by 143 percent between 2010 and 2014 making it the third largest global supplier in this period. It is interesting that India’s neighbours Pakistan, Bangladesh, Myanmar and Sri Lanka import arms from China.

The primary weapon systems imported by us included major buys like quantity 120 Sukhoi Su-30, 16 fighter jets Mig-29 K, and the aircraft carrier INS Vikramaditya; all from Russia. The reason for such imports is often to obtain state of the art equipment by the services to ensure effective performance in operations. Accordingly, indigenous products, which would be effective in the battlefield, would be acceptable to the user.

Deficiencies of Artillery and Indigenisation of 155mm
The Artillery profile evolved by the Artillery Directorate of the Indian Army has correctly stated the need to have 155 mm (52 calibre) as the main equipment to replace the 105 mm Indian Field Gun, 105 mm Light Field Gun and the 122mm Howitzer. A Divisional Artillery Brigade would be equipped with possibly four such regiments along with a Light Regiment of Motors. Our 122 mm Howitzer has become obsolete and currently there are no spares available. Similarly the Ordnance Factory Board has stopped producing the 105 mm Indian Field Gun and is currently manufacturing only the Light Field Gun. The trials for the 155 mm (52 calibre) dates back to the Commencement of the 21st century. Currently trials have just concluded in which two equipment have participated. These are the 155 mm Nexter from France and 155mm Gun from Elbit, Israel. Overall there is a cumulative requirement of 2820 artillery pieces in Towed, Mounted, Self Propelled (SP) (Track and Wheeled) and Ultra Light Howitzers. Apart from these there is a need for additional surveillance equipment, Smerch Rocket Regiments for the mountains and steep dive Brahmos missiles at higher altitudes.

There are numerous measures being undertaken to address this serious deficiency. Within the constraints of our existing Defence Procurement Procedure – 2013, trials have been conducted recently for the 155 mm (52 calibre) Towed Gun and the 155 mm (52 calibre) (SP) Tracked Gun. The K9 Thunder of South Korea in consort with L&T has been selected while the towed gun is under General Staff evaluation. The Ultra Light Howitzer from BAE system is awaiting Letter of Acceptance from the US Government. Meanwhile the Ordnance Factory Board (OFB) has successfully trial evaluated the 155 mm (45 calibre) Gun and an indent for 444 Guns has been placed.

Indian Army
Request for Proposal is being issued for 814 Mounted Gun System. As regards UAVs, two additional troops of Heron are being inducted. Three regiments of BrahMos supersonic missiles have been inducted by the Indian Army and an additional regiment with steep dive capability is being contracted for High Altitude. The speed of acquisition needs to be expedited as the equipment currently held needs replacement. There are numerous companies involved in the manufacture of 155 mm Guns with foreign assistance. Tatas have manufactured a 155mm (52 calibre) Mounted Gun System possibly with the help of a South African Company, L&T is manufacturing with the help of Nexter in France and Bharat Forge has manufactured a 155 mm Gun with assistance possibly from Austria. It also has a consortium with Elbit of Israel. Apart from these, DRDO is developing an Advanced Artillery Gun and has assisted OFB in mounting the 130 mm Gun on the Arjun chassis to provide an alternative to the old self propelled Catapult that was on a Vijayanta chassis. All these guns need to be trial evaluated and thereafter they could be offered for user trials. However, proving any gun is a long process which the companies are well aware of. It is to the credit of Tatas and L&T that they have manufactured the Pinaka Multi Launcher Rocket system indigenously.

There are ranges available for testing of these guns but the procedure for testing needs to be formalised. It is indeed creditable that the up gunning of the130 mm to 155mm is being undertaken as a Buy and Make Indian project by our companies.

Solutions for Developing Artillery Guns in India
The process involving the construction of a gun entails engineering a barrel, the Mounting and Carriage (platform) as also state of the art autonomous sighting system. Out of all these components the most difficult part is the barrel which needs to be auto frettaged to enable it to withstand high pressure which is developed when a shell is fired. A barrel during war may have to undertake sustained fire of about 200 -300 shells in a 24 hour cycle. Apart from the auto frettage equipment, the metal used for the 155 mm barrel needs to have very high degree of elasticity. Further the recoil system particularly for a long barrel like the 155 mm (52 calibre) needs correct designing to absorb the stresses of firing and force the barrel safely back to its original position. The carriage and mountings need accurate designing to hold the barrel correctly at angles of elevation from about three degrees depression to 70 degrees elevation. The sighting system must be autonomous with the capability to automatically lay the barrel for all angles of azimuth and elevation. To add to these components there is a requirement to make the gun mobile to scoot and thereafter shoot to respond to enemy’s Counter Bombardment. This leads to the addition of an Auxiliary Propulsion Unit (APU) which would be needed with all modern guns. The APU also assists in loading, laying, ramming and closing as well as opening the breech block. All components have to be harmonised to make it a full proof, fail safe mechanism. It is undoubtedly a complex process and possibly there are just a score of manufacturers who really can undertake the process.

The Directorate General of Artillery and OFB have developed a 155mm (45 calibre) Gun. The gun, known as Dhanush has been trial evaluated and is likely to be inducted shortly. The gun has been fabricated, assisted by the Transfer of Technology documents obtained while procuring the Bofors Gun. Approximately, 444 pieces of this equipment is to be inducted on acceptance of the equipment by the Army. As such, a state of the art 155 mm Gun can be manufactured indigenously, but with foreign assistance. The same is true of automobiles, aircraft, ships and spacecraft wherein we have undertaken indigenous manufacture with assistance from foreign companies. Viewing our existing requirement this could be undertaken by either the private or public sector. Alternatively, a public private partnership could be undertaken like the 214 mm Multi Barrel Rocket Launcher Pinaka. Pinaka was developed by DRDO and manufactured by TATA and L&T. MSMEs could also help in fabricating components like sights and direction finding equipment.

Way Ahead
The Regiment of Artillery needs to expedite its modernisation process particularly with regard to guns and ammunition. All our guns are more than 25 years old and need to be replaced. The first platform likely to be inducted would be the 155 mm M777 Ultra Light Howitzer on a Foreign Military Sales Programme from the United States. These would be about 145 pieces which would enable about eight regiments. These guns would be an asset for the Mountain Strike Corps being raised shortly. Next would be the 155 mm 45 calibre to be manufactured by the Ordnance Factory Board based on Transfer of Technology from documents received during the initial deal with Bofors. The trials are complete and efforts are on to indent 444 guns to replace the existing field guns. The next on the list would be the Self Propelled Tracked Gun manufactured by L&T and South Korean Company, Samsung Techwin. The trials are completed for the 155 mm (52 calibre) Towed Gun. Request for Proposal is being issued for the 155 mm (52 calibre) Mounted Gun System. Based on the urgency these guns would undergo trials and possibly be ready for induction in another five years. The process of induction would possibly be spread over 10 years and by about 2030 we would have a new set of guns and equipment which would replace our existing guns. Our mortars also need to be replaced and a Request for Proposal needs to be initiated.

Conclusion
Artillery has completed 187 years since its raising. The Indian chapter of our Artillery started post independence with 25 Ponder British Guns of World War II vintage. Along with them were the 3.7 inch Howitzers. The 105 mm Indian Field Guns and their variant the Light Field Guns had followed. The shift thereafter was pro-Russian. The 130 mm Russian Gun became our standard equipment for medium artillery. A sprinkling of 122 mm Howitzers accompanied the 130 mm purchases. The big boost to modernisation was given by the induction of the Bofors Gun in the 1980s. However, the deal ran into trouble with allegations of bribery flying thick and fast. Since then, no Defence Minister has displayed an inclination to modernise the Artillery inventory. There is a need to indigenise our 155 mm Gun to ensure modernisation at the earliest.