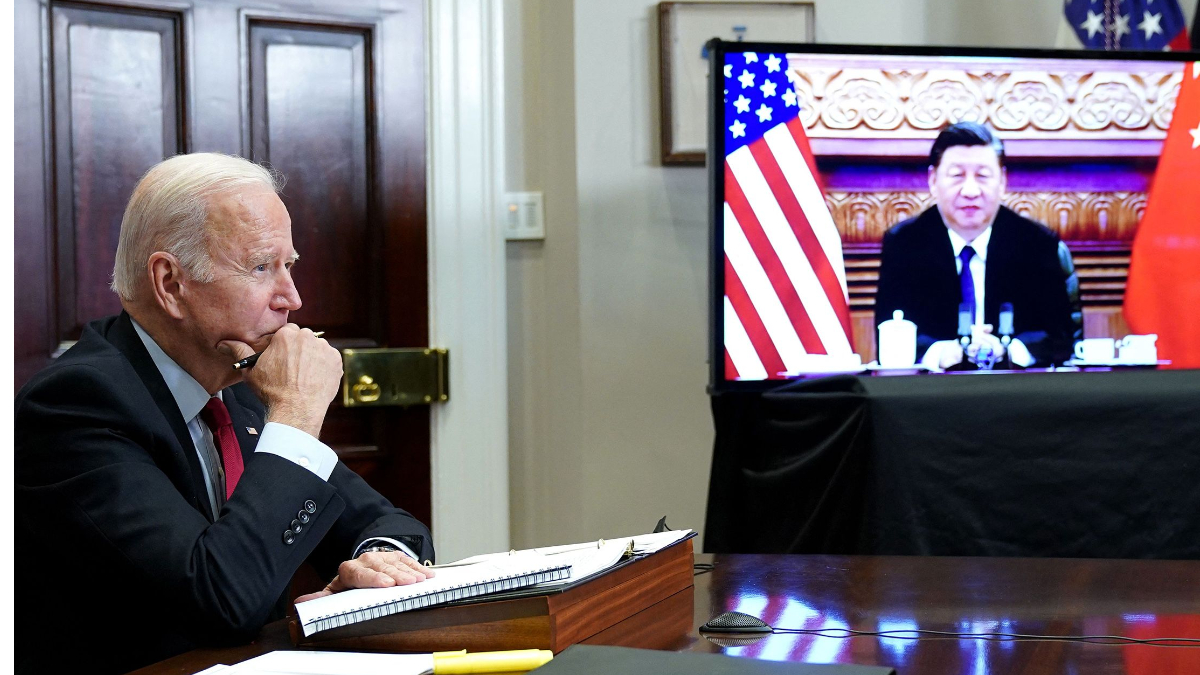 Biden’s meeting with Xi didn’t lead to anything spectacular but, in the columnist’s words, worked like a ‘sprinkler’ to cool the heat. The article analyses some of the issues discussed and some skirted; reaping some dividends while making a breakthrough nowhere. Taiwan remained to the fore in the discussions while the Chinese test of a hypersonic glide vehicle provided the darker backdrop.

President Biden and Chinese President Xi Jinping held their first virtual meeting and used the occasion as a sprinkler to cool the growing tensions and keep the communication channels open to avert conflict and ensure that the competition between the two powers did “not veer into conflict”.

Diffusing hostilities that have marked the relationship since Biden took over the office in January this year was one of the primary aims of the meeting. White House had not expected the meeting to produce a fundamental shift in relations. “We were not expecting a breakthrough as there was none to report,” the person said, adding that the meeting was about ensuring that the US and China “have sort of a steady state of affairs”.

In a three-hour-long meeting, a range of issues including North Korea, Iran and  Afghanistan, human rights and climate change were discussed. However, the focus was Taiwan, which has turned into a flashpoint due to Beijing frequently resorting to flexing its naval and air power in Taiwan Straits. China has deployed J-16 jet fighters, H-6 strategic bombers and Y-8 submarine-spotting aircraft to browbeat and pressurise Taiwan.

The discussion didn’t produce any major resolutions. According to the Financial Times, “failed to establish any “guardrails” to ensure that tensions over the island do not escalate into a dangerous conflict.”

Beijing believes that America is digressing from the “one-China” policy, the bedrock of revival of relations between the two countries in 1979. It considers the Biden administration to be deliberately gaslighting the issue by adopting a liberal policy on engagements of US officials with Taiwanese counterparts. According to Chinese state-controlled media, China is ready for  “decisive measures” if anyone crosses its “red lines” on Taiwan.

Last month, Biden said that the US would defend Taiwan from any Chinese attack. It was a sharp turn away from the stated US policy of “strategic ambiguity” on militarily defending Taiwan. However, these comments were rolled out by the Biden administration before the beginning of the bilateral meeting.

According to The Wall Street Journal, “the United States remains committed to the ‘one China’ policy,” while at the same it “strongly opposes (Beijing’s) unilateral efforts to change the status quo or undermine peace and stability across the Taiwan Strait.”

America is one of the biggest arms suppliers of Taiwan. In the middle of this year, the Biden administration approved $750 million worth of 40 M-109A6 Paladin 155mm self-propelled howitzers with associated equipment and support for Taiwan.  The Wall Street Journal reported on 7 October this year that “about two dozen members of the US special-operations and support troops are conducting training for small units of Taiwan’s ground forces. According to WSJ, for at least a year, the US Marines have been working with Taiwan maritime forces on small-boat training.

The US conducts a robust arms-sales program with Taiwan, and The Wall Street Journal in October reported the US has quietly deployed a small contingent of soldiers to train Taiwanese soldiers for at least a year.

Taiwanese military is tiny in comparison to the People’s Liberation Army (PLA) in terms of manpower, air and naval capabilities. The US arms sales cannot reverse this equation. China can blockade Taiwan, airlift full-scale battle tanks onto the island and overpower Taiwan’s air defence systems. However, the US diplomatic support to the island nation is more crucial to deter China from launching an invasion.

Aside from Taiwan, Biden also highlighted Chinese policy of blatant human rights violations in Xinjiang, Hong Kong and Tibet. The growing Chinese nuclear arsenal, another major concern of the US, was skirted by Xi. He did not show much interest in nuclear “strategic stability” talks.  According to estimates, China is likely to possess more than 1,000 warheads by 2030.

The recent launch of a Chinese hypersonic glide vehicle has revealed Chinese nuclear ambitions and its ability to make a dramatic and threatening shift in its nuclear posture. There is no gainsaying the fact that China is away from fully developing and deploying such a system but the demonstration of very advanced hypersonic glide vehicle capable of delivering nuclear warheads has sent the US strategic establishment into thinking hard, presenting a new challenge for the North American Aerospace Defense Command (NORAD) and its counterparts in other democratic countries in the Indo-Pacific. The tests have shown that Chinese military modernization is progressing at a relentless pace. And the middle-kingdom is marching full-ahead to dominate the outer space.

The Chinese navy is already ahead of the US at least in terms of the number of ships. Its conventional forces are modernising at a relentless pace. And the latest hypersonic test and the warhead warning has now focused attention on a potentially dramatic shift taking place in Beijing’s nuclear posture. All these developments have forced many in Washington to say that this is the ‘Sputnik moment’ in the Cold War with China.

With growing Chinese aggression in the South China Sea and Taiwan Straits, the addition of a space-based nuclear dimension is likely to exacerbate US-China tensions, veering global politics towards the intensification of Cold War 2.0. The Chinese reluctance to discuss nuclear arms control issues with the US is making the situation even more volatile.

The revelations about Chinese hypersonic weapons have come when the Biden administration’s Nuclear Posture Review (NPR) is underway. It is the fifth such review after the end of the Cold War. As the process picks up momentum, the divisions within the Congress with regards to the future of US nuclear policy are becoming clear. Chinese actions in space are a shot in the arm for those advocating the modernisation of US nuclear capabilities.

The Chinese nuclear behaviour was certainly bad news for the arms control lobby that intends the US strategy to be less dependent on nuclear arsenal. The Interim National Security Strategic Guidance, released by the White House in March 2021, stated that the administration would seek to “re-establish (its) credibility as a leader in arms control” and “take steps to reduce the role of nuclear weapons in (US) national security strategy.”

Joe Biden had criticised the Trump administration’s 2018 nuclear posture review that had sought to expand US nuclear capabilities in the wake of growing Chinese and Russian enhancement of their arsenal. During the presidential campaign, Biden had said that his “administration will work to maintain a strong, credible deterrent while reducing our reliance and excessive expenditure on nuclear weapons.”

The recent Chinese secret missile test is likely to deter Biden from tweaking nuclear policies initiated by the Trump administration. However, despite the pressure, the Biden administration is likely to adopt an approach that would bring China’s nuclear capabilities under the arms control regime and use arms control as a foreign policy tool. According to Jane Vaynman, in the coming years, emerging technologies will enable the use of arms controls as a foreign policy tool. Artificial intelligence and satellites, will play an important role in monitoring and verifying compliance with arms control promises made by China and Russia.

The Biden-Xi virtual meeting is being hailed as a success mainly because the expectations were low. None expected a breakthrough. The attempt was to bring the relationship on an even kill for competition to grow in an atmosphere devoid of the fear of confrontation. According to White House officials, the primary aim of the meeting was to ensure that the US and China “have sort of a steady state of affairs”.

The big takeaway from the meeting is that Washington is willing to acknowledge that it needs to work with Beijing for the larger good of global commerce as well as peace. This certainly doesn’t mean that the US-China rivalry will be a thing of the past. The Cold War 2.0 is already underway. This only represents a brief moment of a thaw in a relationship that is poised to see more intense competition in the coming years. Such moments were not uncommon even in the first Cold War when the US and Soviets negotiated to reduce tensions.

Concerning Taiwan, China is feigning aggression. It is not likely to go on and invade Taiwan and face the wrath of the international community. China will play second fiddle to the US for a few decades more, till of course, it is confident that its actions will be condoned by the world.

Till then America will continue to maintain pressure on China. It will not vacate the turf for China to have a free run and control the rhythms of global affairs.

Cdr (Dr) Atul Bhardwaj is currently Hon. Visiting Fellow in the Department of International Politics, City, University of London and Adjunct Fellow, Institute of Chinese Studies, Delhi. He is the author of the India-America Relations 1942-62:Rooted in the Liberal International Order, Routledge (2019).