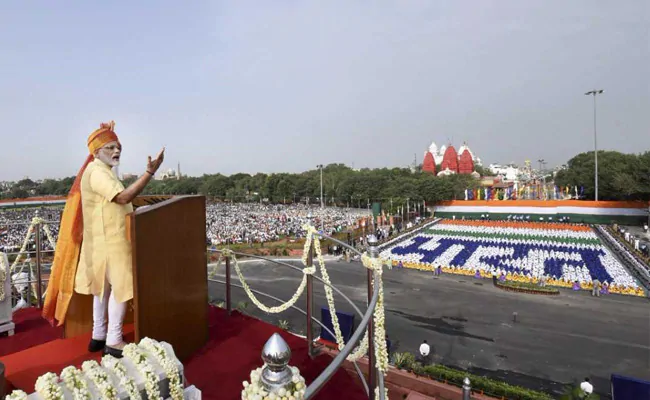 CDS to Bring Doctrinal Coherence in the Indian Military

Prime Minister Narendra Modi took everyone—or let me say at least the strategic community—by surprise by announcing the appointment of a Chief of Defence Staff from the ramparts of the Red Fort on 15 August.

“Our forces are India’s pride. To further sharpen coordination between the forces, I want to announce a major decision from the Red Fort. India will have a Chief of Defence Staff (CDS). This is going to make the forces even more effective,” the Prime Minister said in his Independence Day speech, ushering in one of the most significant defence reforms in the past two decades.

The need for creating the post of CDS was first clearly articulated by the Kargil Review Committee (KRC) in 1999, although the demand for a single point military adviser has existed since 1971. The Group of Ministers (GoM) appointed in the wake of the KRC report recommended several measures to improve synergy and coordination among the three armed forces. The biggest recommendation was to create the post of CDS. However, traditional bickering amongst military leaders, resistance from the civil bureaucracy and lack of political will combined to delay the appointment of CDS so far.

On Thursday however, Modi, politically stronger than any other Prime Minister since 1984, bit the bullet, taking the first step in what is likely to be a long road towards truly integrating India’s armed forces.

So what is the likely road map of this journey? And what would constitute the job profile of India’s first CDS? Details are still hazy but from whatever little information one could gather from multiple sources, it is clearly going to be a calibrated approach to achieve full inter-services jointness and integration of the three services with the Ministry of Defence (MoD) in coming years.

First up, it needs to be noted that India’s first CDS will be a four-star officer, equal in rank to the three service chiefs but a notch higher in status. He will most likely also have functional parity with the defence secretary although the top civil servant in the MoD will continue to be below the CDS and the three service chiefs in the Warrant of Precedence. This arrangement will probably disappoint many military veterans but in its wisdom, the government has decided to be cautious and not go the whole hog in giving a 5-star rank to the CDS—at least for the moment.

To begin with, the CDS is to be entrusted with full charge of the recently created three tri-services agencies—for space, cyber and special operations. The Andaman and Nicobar Command, headquartered at Port Blair will also be under the CDS while there will be no change in the status of the Strategic Forces Command (SFC), the functional arm of the country’s Nuclear Command Authority (NCA). Any future tri-service organisation, let’s say an Indian Ocean Region (IOR) Command, can also become the direct responsibility of the CDS.

All available inputs suggest that the main tasks assigned to the CDS will include integrating training infrastructure and courses spread across the three services, prioritisation of inter-service  allocation of resources and avoiding duplication in acquisition and procurement in consultation with the service headquarters. Going forward, the CDS will plan and execute tri-service exercises—both small and large—over the next two-three years to evolve true jointness across the military.

In a way, CDS will replace the current Chiefs of Staff Committee (CoSC), a compromise arrangement where service chiefs become chairman by rotation. The CISC (Chief of Integrated Defence Staff to the CoSC), a three-star officer, currently heading the HQ Integrated Defence Staff (IDS), created after the GoM report in 2001, will become the Vice Chief of Defence Staff. The IDS organisation—and its expanded scope and numbers–will therefore automatically come under the CDS as his secretariat.

Eventually, HQ IDS may have to be integrated with the MoD, instead of remaining outside its functional structure, necessitating changes in allocation of business rules. The CDS will thus report to the Raksha Mantri (defence minister) and the Cabinet Committee on Security (CCS). Some current practices will however remain unchanged. The defence secretary will be directly responsible to the Parliament for the functioning of the MoD and will be in-charge of budget and its disbursement in the ministry.

The Prime Minister’s announcement may appear to have been made out of the blue, but it now transpires that the Prime Minister’s Office (PMO), the National Security Council Secretariat (NSCS), the MoD have been working in tandem to not just create the post of CDS but also evolve a defence strategy for the country. In fact, the national defence strategy (which looks at the country’s internal, external and non-traditional security threats in a comprehensive manner) has been derived from the National Security Strategy (NSS) that has been finalised in the past six months by the NSCS. The CDS is now expected to write a joint military doctrine flowing out of the national defence strategy and the Raksha Mantri’s periodic operational directive issued to the Indian military.  There is also a clear understanding at the highest decision-making level that in the Indian context there is no need or scope to create joint or theatre commands given that the country also has complex internal security challenges to deal with.

The CDS is expected to work with all the three service headquarters and the civilian bureaucracy to bring doctrinal coherence in the Indian military’s future roadmap. There is however no plan to give any operational role to the CDS in the near future. That will remain the primary responsibility of the respective service chief. Overall, this move is aimed not only at improving inter-services synergy but also to create a balance in the civil-military relations. While keeping the primacy of civilian control over the military, the creation of the post CDS should be seen as the first step towards bringing the pendulum of civil-military relations to the middle instead of heavily leaning towards the civilian segment of the nation-state.