The domains of warfare are expanding and technology is being used for greater transparency in all domains. One such area, till very recently the reserve for very limited countries, is underwater domain awareness. The Chinese have been pursuing an ambitious project that the author details in the article. He also attempts to draw the focus of the Indian establishment on the need to develop this critical capability.

The ‘Undersea Great Wall’ (UGW) project is an ambitious programme announced by the China State Shipbuilding Corporation (CSSC) in December 2015. It’s a part of the focused underwater capacity building initiative by the Chinese government since 1980 that has been openly announced only recently. The CSSC announced that it would construct an underwater observation system in the disputed South China Sea region. The UGW is part of the major project to set up an offshore observation network by 2020. The stated larger vision of the Chinese government is to be seen as a global maritime power with a network covering coastal waters, the high seas, and polar waters.

The stated claim is that the UGW project is considered as an advanced form of the Sound Surveillance System (SOSUS) which was used by the US during the Cold War period to detect Soviet Union submarines. The lack of advanced maritime surveillance system is considered a serious challenge in securing its growing maritime interests. Chinese experts believe that “China’s current maritime security is complex, where most of Beijing’s undersea domain doors have been left open.”

The project is seen as a Chinese response to the growing tensions in the South China Sea with the United States and its neighbours impeding China’s dominance of the area. Japan’s activation of the coastal surveillance unit on Yonagunt Island is also considered to be a trigger. This a reflection of increasing assertion by China in the South China Sea and around.

The Chinese have attempted underwater networks in the past with an underwater optical detection network in 2010 in the area of responsibility of China’s North Sea Fleet, headquartered in Qingdao. The second system was installed near Hainan Island in 2011, and part of the system was tested in 2013 near Sanya nuclear submarine base.

In 2012, the State Council announced the construction of the seabed observation system in Lingshui, Hainan. These projects remained ambitious in their design, however, failed to deliver the desired results once implemented. The technology gaps between China and other developed global maritime powers like the US, Japan, Canada and Europe is considered to be enormous and projects like these are likely to bridge these gaps. 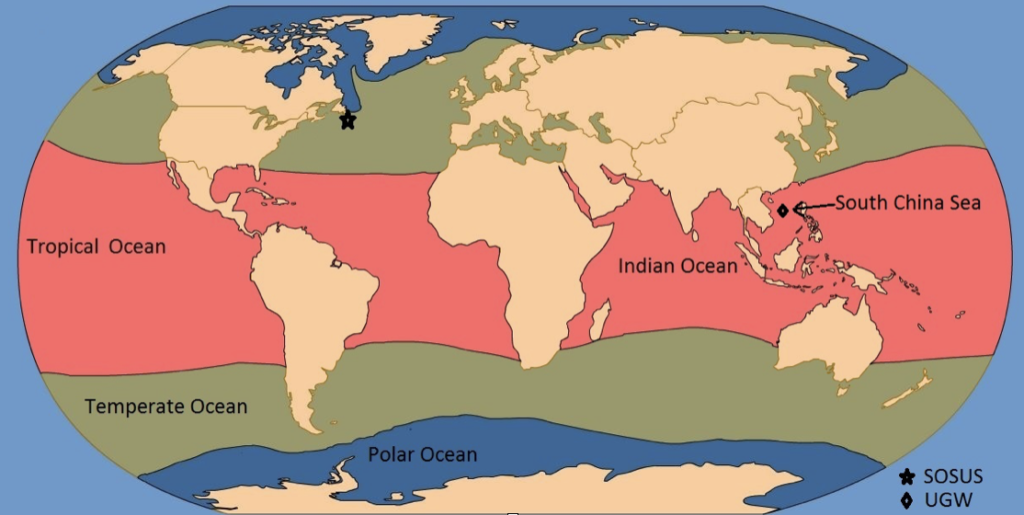 The underwater sensor networks primarily need the acoustic capability to sense the undersea events or developments. There are three distinct layers of this acoustic capability – the acoustic sensor, the analysis algorithms and the information sharing mechanism. We also call it to see, to understand and to share. The sensor hardware is highly specialised and can be sourced from a few entities in the US and Europe.

In the post-Cold War period, it’s available though at a significant cost. The share category has also matured in the areas of technology and management available from other above water networks. It’s only the analysis that requires significant indigenous effort and import is not possible. This includes data pre-processing to improve data quality and the application of specific information extraction.

The pre-processing to improve data quality requires significant understanding of the underwater channel behaviour and mitigation. The South China Sea like the Indian Ocean Region (IOR) being in the tropical littoral region requires special efforts and cannot be compared to the SOSUS system deployed in the temperate or near polar seas. Sonar suffers near five times degradation in range when deployed in the tropical waters compared to the SOSUS location. The underwater medium acoustically behaves like shallow waters in the tropical region, up to 2000 m depth based on the sound axis location. The ongoing strategy to replicate the Cold War development of underwater technology in the tropical littoral settings is a far cry. They have repeatedly failed in the absence of massive infrastructure investment to understand the medium characteristics. Such investments are possible only with the pooling of resources across maritime stakeholders.

The UGW project is a significant initiative to build underwater capability for any maritime power that aspires to compete with the global powers. Even if it does not achieve the stated objectives, it is still worthwhile to invest and develop the capability. A comprehensive UDA concept in the tropical littoral waters is a first of its kind effort and may have only deterrence value for its adversaries rather than any credible response to the growing tension in the South China Sea. Optimum sonar performance will continue to remain a challenge in the tropical littoral waters.   The initiative in its construct does reflect the participation of all the four stakeholders of UDA namely, the national security, marine environment and disaster management, Blue economy and the underwater technology development. The earlier efforts by only the military have failed as the resource requirement for any underwater network initiative in the tropical littoral waters is huge, and no single stakeholder can build the infrastructure on their own.

India faces similar challenges in the IOR. Effective UDA will be the backbone of maritime growth that is sustainable, safe and secure. The UGW project represents an initiative that has emerged from a well-conceived maritime strategy. The Chinese project will significantly enhance their underwater capabilities for both military and non-military applications. The IOR and the South China Sea have evolved as the strategic hotspots of the 21st century. The political instability and economic opportunities in an unregulated maritime space make them extremely vulnerable and contested maritime zones. Similar UGW project in the IOR for India does have significant merit.

Arnab is a researcher, maritime strategist and an entrepreneur. He is the Founder & Director of the Maritime Research Centre (MRC) under the Indian Maritime Foundation, Pune that is working on a unique concept of Underwater Domain Awareness (UDA) as its main focus. He is a visiting Professor at the Defence Institute of Advanced Technology (DIAT), Pune, He also runs his own company M/S NirDhwani Technology Pvt Ltd that provides consultancies and services for high end maritime security solutions and marine conservation support. He advises start-ups on underwater technology solutions and defence strategies. He has over 70 publications and a book to his credit.