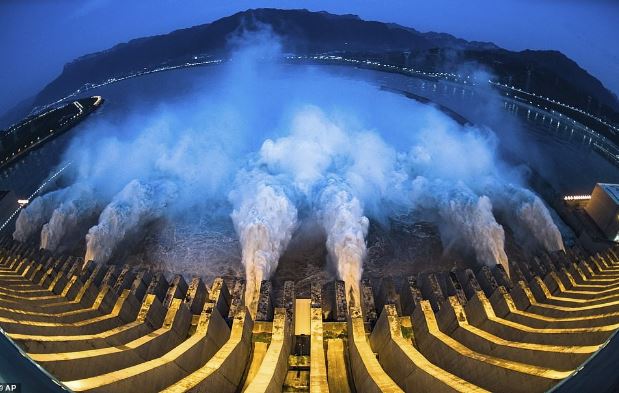 To preserve its own Eco System China is blatantly causing Environmental damage to other countries. The Three Gorges Dam, the largest dam in the world could collapse causing immitigable disaster spread over huge swaths. The author provides an insight into the Chinese rationale for having now shifted their focus to construction of dams beyond their borders.

On 30 July, 2020 Mail Online reported that raging floodwaters rushed into the Three Gorges Dam’s reservoir at a staggering 60,000 cubic meters per second on 27 July 20 raising concerns of a possible damage to the dam. Earlier this month, the dam’s operator admitted to state media that the 2.3 km long structure had ‘shifted, leaked and become deformed’ slightly, but assured that it was functioning well and safe to use.

China’s Three Gorges Dam is under imminent danger of collapsing following incessant rains for the past two months. The recent photographs and satellite imageries of the dam convey a very grim picture. The Dam was built over Yangtze River in 1994 and is the largest dam in the world with a capacity to produce 22,500 mw of electricity. Construction of this dam has led to serious social and environmental concerns in China. But the Chinese State media continues to ignore the possible fallouts.

Global Times report quoting Guo Xun, a research fellow at the Institute of Engineering Mechanics at the China Earthquake Administration in Beijing, refuted the rumours and speculation, saying that the dam is capable of holding far larger inflows than it is experiencing now.

So much for Chinese seriousness on an issue of grave human concern. E-International Relations in their report have mentioned that the construction of the dam has led to the flooding of 13 cities, 140 towns and 1,350 villages, numerous sites of cultural, historic and religious heritage. 1.3 million inhabitants were relocated; many from rural areas to cities. But the Three Gorges Dam is just a small part of the larger problem. There are a large number of other dams in China with similar issues. Interestingly China today is the world’s largest dam builder.

As per International Rivers report there are more than 87,000 dams in China forcing relocation of over 23 million people from their homes and land. 42 per cent of its rivers are severely polluted and 3/4th of its lakes are unsuitable for human use and fishing. Despite serious consequences, China had planned to construct more dams on the Lancang (Mekong), the Nu (Salween), the Yarlung Tsangpo (Brahmaputra), and the Jinsha (upstream of the Three Gorges Dam in the Yangtze River basin). However due to persisting domestic pressure, the Chinese government was forced to review its dam construction plan. It has now postponed construction of new dams beyond 2020. This date may get further revised due to the onslaught of COVID 19.

Image Courtesy Mail Online: Raging floodwaters rushed into the dam’s reservoir at a staggering 60,000 cubic metres per second on the day, said Xinhua

The foregoing situation raises two important questions. First, why has China gone on a dam construction spree? Second, if domestic concerns are preventing it from further construction of dams, what is it doing to meet its energy needs through hydropower? Answer to the first question is the rising energy need and necessity to diversify the sources of energy from Coal to alternate and renewable sources. China has charted a phenomenal growth since 1979 when Deng Xiaoping opened China’s economy to the world. However, it has also led to meteoric rise in its energy consumption. China is now the world’s largest consumer of energy surpassing the US. Its energy consumption stands at 20.8 per cent of the global energy share.  Primary source being coal, China’s coal consumption has risen from 0.99 billion tons in 1990, to a whopping 4.64 billion tons in 2018. Its {1,951 Million tons of oil equivalent (Mtoe)} coal consumption in 2019 was higher than the combined total consumption of the world (1,820 Mtoe). This has led to considerable air pollution. Sensing the need to diversify to alternative renewable sources of energy it switched over to hydropower by building numerous dams.

It today boasts of world’s largest dams leaving the US far behind. Including the Three Gorges Dam, China has to its credit four of the top 10 largest energy-producing hydroelectric dams in the world. China, by 2017, had increased its hydroelectricity generation to over 1,145 billion kWh.   Concerted effort to construct dams had made China the world leader in hydropower in 2014 itself. However, it has come at a huge environmental and human cost, so China has started slowing down its dam construction spree which if one were to divide over time since 1949 would roughly amount to construction of one dam per day. But it has not lost its appetite to construct dams and has gone global eyeing other countries of the world.

That answers the second question of alternate sources of hydropower. It has started targeting its neighbours either through economic lure or military coercion to gain access to international waters, especially that of SE Asian countries and rivers bordering India such as the Tsangpo (Brahmaputra) being upper riparian state. Dams on Tsangpo has adversely affected India’s environment. Every year Assam witnesses uncontrolled fury of floods caused by overflowing Brahmaputra, thanks to damming of Tsangpo by China. 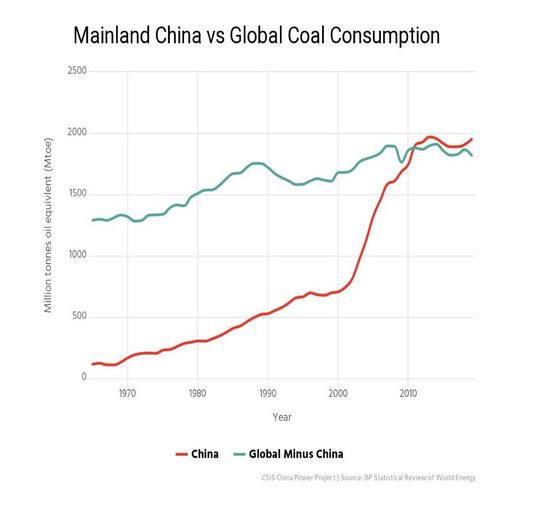 Image Courtesy China Power : According to the International Energy Agency, 80.6 percent of China’s emissions came from coal in 2017, compared to 70 per cent in India, 28 per cent in the United States, and 29 percent in the European Union.

Xi Jinping and Li Keqiang continue to disregard environmental and social concerns and have started harnessing the water resources of other countries to fulfil their aim of making China as the superpower of the world. After severely damaging their own country’s biodiversity they are bent upon ruining the world’s ecosystem. China is especially targeting the low and middle income countries in Asia and Africa to construct dams overseas. They are bundled in a package to meet the Chinese hidden agenda of garnering access to alternate source of energy, providing employment to Chinese people overseas and further resource extraction or creating new markets by deploying advance technologies.

Its planned aluminium industry at the Bakun dam site in Borneo, Malaysia is an example. There are currently 304 Chinese overseas dams, most of them in Southeast Asia (38%) and Africa (27%). With the award of Daimer Bhasa dam project in Gilgit – Baltistan by Pakistan to China, it is also challenging India’s position over the region besides endangering the Gilgit – Baltistan socio-environmental ecosystem.

Moves by China to tap water resources from its neighbours appears to be the preferred strategy with a view to meet its hydropower needs and also exploit the host country economically and militarily. But by doing so it is seriously ruining the ecosystem of the host country. Chinese are lending at commercial rates for construction of these dams unlike the IMF and World Bank which lend at very low or zero interest rates. In most cases the countries approach China when they do not succeed in getting loans from IMF or World Bank. For example IMF and World Bank had turned down the request for construction of Diamer Bhasha dam to Pakistan way back in 2011.

One of the additional hidden aims of China is to render its neighbours weak and dependent on China as most of these nations will not be able to repay the loans and fall into debt trap. One may ask that despite knowing the adverse consequences of constructing large dams at huge human and economic cost, why are these countries not only permitting but also inviting China with open arms to do so. The answer lies in the approach of China.

To start with, China is selecting economically weaker or middle income countries such as Cambodia (Kamchay dam and Lower Sesan 2 dams), Thailand, Malaysia and Myanmar. In fact the construction of Lower Sesan 2 dam through a joint venture between Chinese SOE (90 % stakes) and a Cambodian firm (10 % stakes only) has international ramification. The dam is going to severely impact the great Asian rice bowl situated in large parts of Cambodia itself, Laos, Vietnam and Thailand.

Daimer Bhasa in PoK, in any case is a given due to Pakistan now virtually being a vassal state of China. Combined impact of CPEC and Diamer Bhasa dam is going to be disastrous for Pakistan and unfortunately also for the people of Gilgit – Baltistan. As per some experts the dam will lead to water shortage in Ladakh, flood 100 km of the Karakoram highway, and the villages and farms of 35000 people could disappear. Tens of thousands of 1000 year old Buddhist rock carvings could vanish.

Similarly, it wants to coerce India into submission by attempting to push the LAC along the Indus – Shyok line and get greater access to the waters of these rivers in future. Remember Chinese think long term. The message is clear Chinese Communist Party under Xi, to save its own eco system from further degradation has now turned its eyes on the hydro power resources of its neighbours/countries which are weak economically or militarily. It knows, it has the US in sight and wants to surpass it before it completes 100 years of uninterrupted Communist rule.  However, Xi is probably oblivious to the fact that ultimately likeminded countries will take cognizance of the Chinese game plan as degradation of environment is likely to affect the entire humanity transcending national boundaries.

China is treading on thin ice and sooner or later its destructive and selfish attitude will lead it towards the path of self-destruction. And, for other countries, it is time they join hands to defeat the ulterior motives of Xi Jinping’s China.