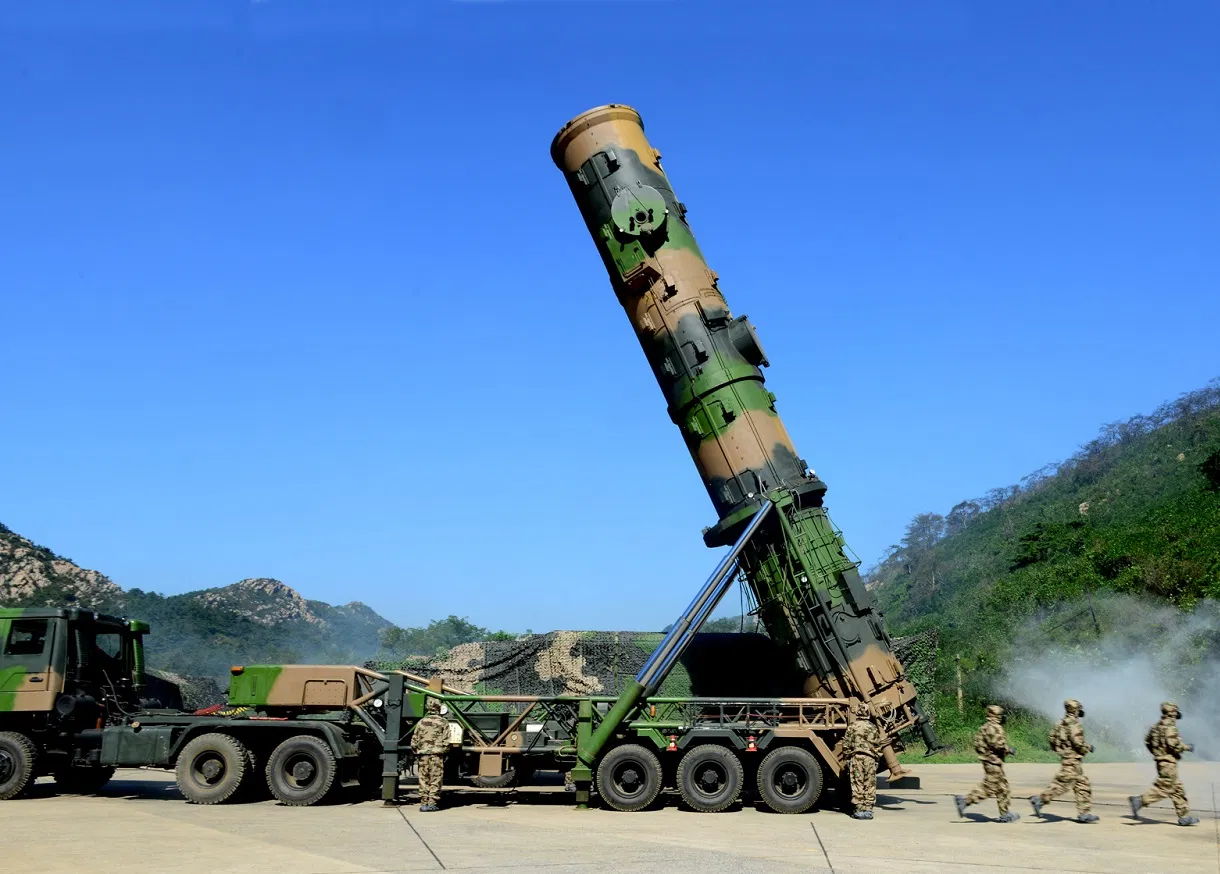 In the nineties, the Chinese realised that keeping a nuclear-armed missile force can only be deterrence and not an offensive tool, as PLA cannot use it against a conventionally armed enemy. To make the PLA stronger and fight the local wars under Informationized Conditions, overbearing firepower is required. This requirement of firepower led to a deliberate change in the focus of developing conventional missiles. With time, their numbers increased, and they became both a source of deterrence and offensive action. The development had an overriding constraint, that of the accuracy of the payload. While a nuclear missile is an area weapon, the conventional missile is deemed effective only if it can destroy pinpoint targets or land in areas as designated. Pinpoint destruction asked for accuracy of a high order. 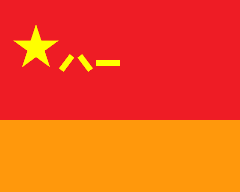 The initial set of missiles had an accuracy defined in terms of CEP (Circular Error of Probability) of 800 meters, which was in line with the nuclear deterrence. But with increased realisation in the CMC in the 1990s – local wars and not nuclear wars would be the future – the need for accuracy grew. Precision thus demanded the use of conventional missiles with higher accuracy or lower CEP. There was a drive to find technological answers to designs guidance systems which would achieve much lower CEP. The successful use of cruise missiles in the first Gulf war by the US forces convinced the CMC that conventional missiles had a better chance of application against Taiwan and targets in the East China Sea for the PLA.

The quest for conventional missiles with precision strike capability gained strength. The quest transcended from short range to medium range, and a new class of missiles called the IRBMs (Intermediate Range Ballistic Missiles). Also added to the family was the introduction of cruise missiles. This class included the Land Attack Cruise Missiles: LACM and Anti-Ship Cruise Missile – ASCM. They complimented PLARF’s philosophy of AA&AD (Anti Access & Anti Denial). The use of missiles in a conventional role was possible only because their CEPs were in the desired order.

The graph given below depicts the progress in improvement of CEP 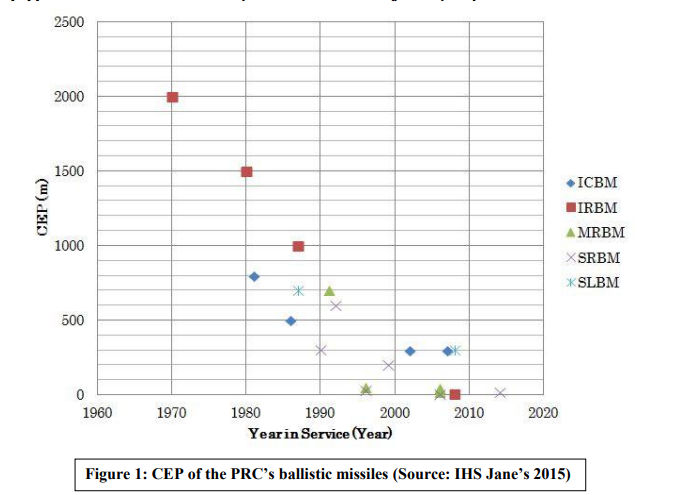 For any missile to be relevant, it must possess three essential characteristics: Precision, Lethality & Survivability. PLA has worked on all three aspects. Increasing precision has boosted the Lethality given the same quantum of explosive content. For survivability, PLA has moved away from the liquid-fuelled missiles to more robust and less time consuming solid fuelled missiles. Solid fuels have allowed the reduction in the missile chain and allowed missiles to be vehicle bound. A missile on the wheels gives it better mobility and increases its survivability.

PLARF & its use Against India

The analysis of PLARF against India is in the backdrop of conventional missiles as explained in the first part of this two-part article. It would be prudent to state that the basis of raising the PLARF and creating the AA & AD doctrine is Taiwan centric. All the literature available expounds PLA strategy against Taiwan and territory surrounding the island. The strike capability for conventional missiles is defined by a line which encapsulates two island chains. The first Island chain, includes the islands in the East China Sea, east of the Philippines and Japan. These are within the LACM and SRBM range. The second island chain covers up to the US Gaum islands where the 7th US Feet is stationed and is targeted by MRBMs. 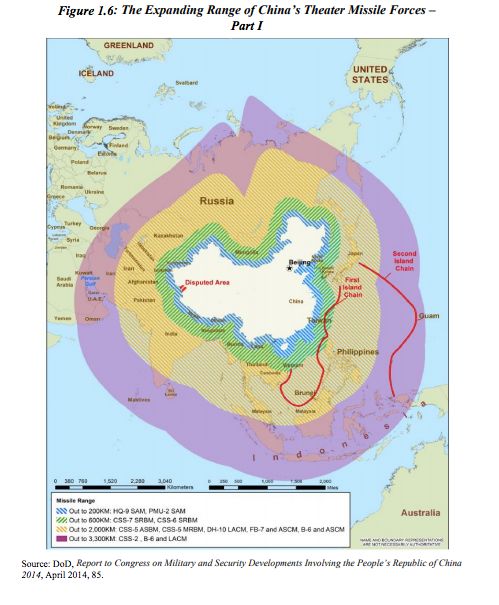 Any analysis in respect of India and PLARF would be a matter of conjecture. The PLARF organisation is almost the same as the PLASAF, with the bases remaining unchanged. The bases have remained where they were although their names in terms of numbers may have changed. All except one base is a mix of both nuclear-tipped and conventional missiles. The only exception is Base 61 at Huangshan; it has seven brigades equipped with conventional missiles. Currently, the PLARF has seven bases including a logistic base and most orient to the east and the North. The map below shows the location of these bases. It is evident by taking a glance that the concentration of the missile force is to the east. The circles drawn in the diagram above show that India falls within the 600 km radius. These distances are measured from the periphery of the border. 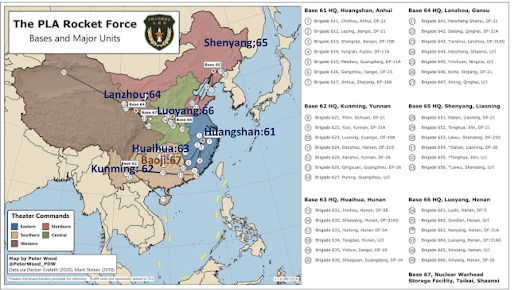 Analysing the missile bases’ deployment indicates that India’s nearest PLARF base is Kunming Base 62, which is, as the crow flies approximately, 2500 km from the Indian capital. But it falls within the Southern Theatre Command. The nearest PLARF base that falls in the Western Theatre is Lanzhou, about 3000 km from the Indian capital. The distances would preclude the use of SRBMs from their current location. That leaves the use of MRBMs and the LACMs. Base 64 at Lanzhou is known to have at least one MRBM DF 21B/21C brigade and another may be a LACM brigade at Hanzhong. To get a better perspective, understanding the family of conventional missiles is essential.

Understanding the distances leads one to infer that there are no missile bases of the PLARF targeting any Indian location with conventional missiles from their current areas. Also, there is only one PLARF base in the western theatre. Another inference is that there are no SRBMs units in the near vicinity. Their deployment is in the Eastern Theatre Command. Given their geographic distance, the chances of moving the SRMBs from Eastern Theatre Command and bring it to bear upon the Indian forward locations seems less probable.

Philosophy of Employment of the PLARF Conventional Missiles

PLARF was raised with the intent of strategic deterrence and warfighting. While the nuclear arm of PLARF does the strategic deterrence, the conventional arm executes the warfighting. Conventional missiles are for striking first, striking hard, striking with precision and rapidity. For SRBMs, the principal area of employment is against Taiwan. It’s PRCs target number 1, and SRBMs would be used to subjugate their anti-missile defences. Taiwan has invested heavily in anti-missile defensive equipment from the US, including the Patriot System. SRBMs would be launched in salvos from multiple axes to confuse and overwhelm the ballistic missile defence system, and not allow any reaction time to the adversary. The range of the SRMBs is between 250 km to 600 km is sufficient to target Taiwanese mainland and beyond, from PRC’s east coast.

The conventional long-range missiles will simultaneously carry out precision attacks on high-value targets such as command and control centres, enemy’s early warning systems, electronic hubs and data centres, telemetric radars and space-based satellites and space-based information network. High-value targets like aircraft carriers and missile bases or aviation bases are likely to come into play in the immediate battle. The MRBMs and the LACMs, ASCMs are the principal elements of this warfighting effort. With these PLA can target up to the Second Island Chain up to Guam. However, the main enemy is Taiwan and the US forces, which are likely to help in the immediate battle.

Use of SRBMs Against India: Coming to the reason why the employment of SRBMs is less probable against India? The current SRBMs are not the best precision-guided weapons and are used against land targets in salvoes to overwhelm an area target like Taiwan’s ballistic missile defence system. The use of SRBMs against infantry troops in the frontline is too expensive a proposition. While a few targets like the C4I systems may be available in the rear locations, moving an SRBM unit 3000 km to eastern Ladakh would be a colossal waste of effort. A missile unit has a dedicated communication and control set up accompanying it. Such a set up requires permanent ground-based structures. Hence a missile battalion depends on infrastructure provided by the brigade HQs or the base HQs to provide the communication and control support for the launch of the missile—also, the requirement of carrying first line missiles. The complete set would become a long logistic chain. Thus, it is an intelligent guess that it would be difficult to transport this critical supporting set up across 3000 km. The payoffs for such a move are very insignificant, and hence in the probability, moving SRBMs against India is low.

Having ruled out the employment of SRBMs, the same logic applies for the employment of MRBMs and LACMs missile units of the Western Theatre Command. The use of MRBMs would breach the MTCR (Missile Technology Control Regime) treaty; thus, their use can be ruled out unless there is the improbable nuclear overhang. In an extreme case, the LACM could stage forward, but any missiles units’ movement would be spotted by the intelligence-gathering satellites and India would know of their move. Such a measure would only raise the escalatory ladder, which is against the employment doctrine of PLARF.

China has made far-reaching changes to the organisational structure of the PLA, as they intend to make the PLA a vital instrument of the state policy. PLARF is the arm of decision for the country as declared by President Xi Jinping, and it is likely to grow in its importance. It is believed that all nuclear weapons, the complete Triad would fall under the organisational structure of the PLARF in the near future. With its command and control resting with the CMC; a bright possibility. China is Taiwan and US-centric; thus, the entire focus of the PLARF is poised towards Taiwan and the US presence east of it. There is very little thought as yet given to use the PLARF against India. However, due to the standoff this year, it may change in future. Till then, China would rely on integral artillery resources to provide firepower to their fighting formations.