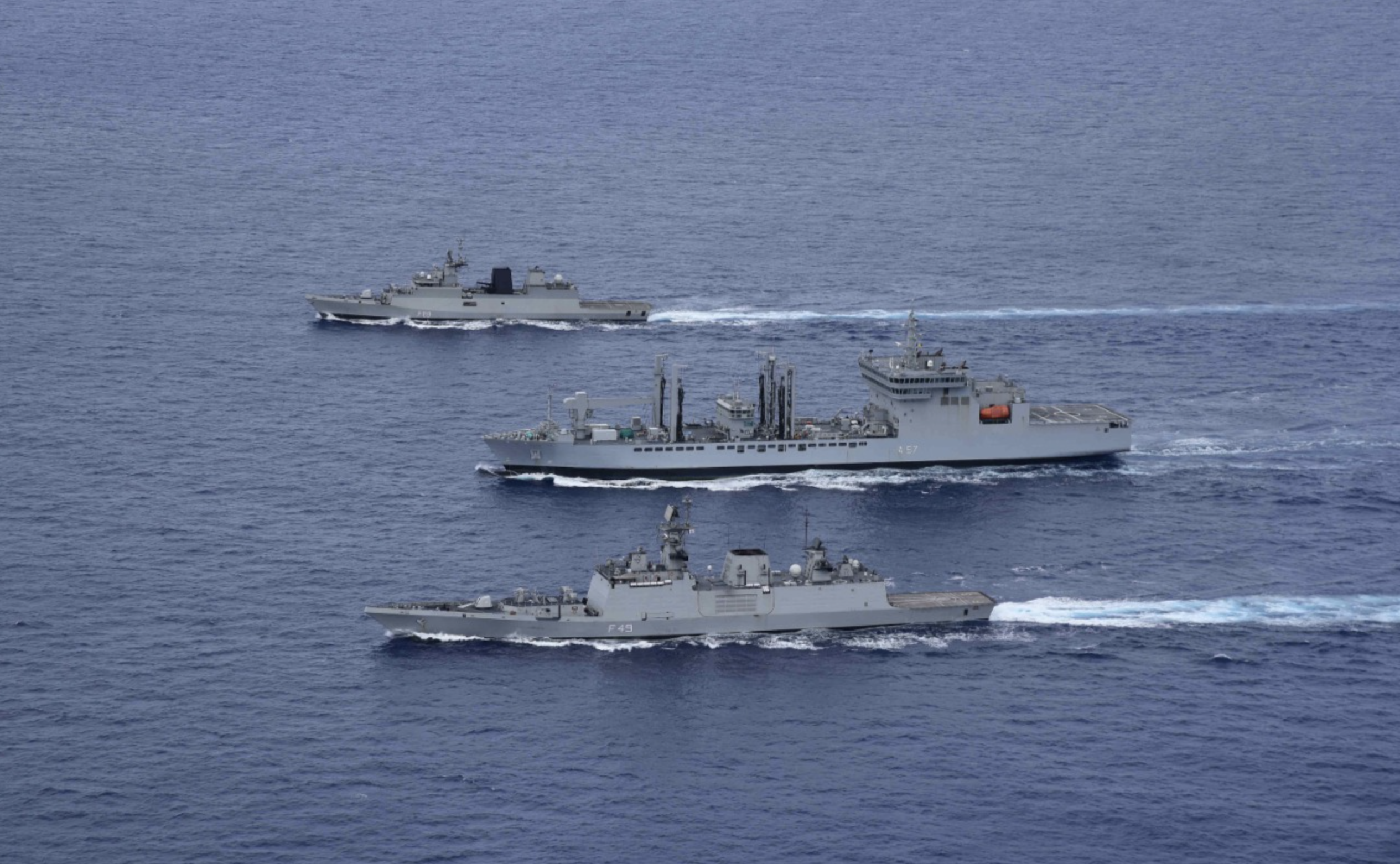 With a focus to counter China’s growing assertiveness in the Indian Ocean Region (IOR), the Indian Navy has conducted over a month-long drill, its largest military exercise ever – the Theatre Level Operational Readiness Exercise (TROPEX-21) – in Indian Ocean Region (IOR). The biennial exercise had commenced in early January 2021 involving all three Commands of the Indian Navy, the Tri-Services Command at Port Blair, and elements of Indian Army, Indian Air Force and Coast Guard that “aimed to validate its concepts of war-fighting across the entire spectrum of warfare,” according to the Indian Navy.

“This reaffirms the Indian Navy’s capability to carry out long-range maritime strikes in the Indian Ocean Region, a capability that is central to meeting operational challenges and ensuring safe seas, secure coasts,” it said. The exercise was aimed at validating the Indian Navy’s Operational Philosophy across the entire spectrum of conflict-ranging from addressing low end sub-conventional challenges to high-end conventional threats.

China has stepped up its submarine and warship patrols in the Indian Ocean over the past few years as well as its surface naval presence. “The recently concluded naval war drill revisits our readiness and preparedness plans to validate the checks and balances in place for their (Chinese and Pakistani) Naval operations in IOR (Indian Ocean Region),” said Captain D K Sharma, former spokesperson of Indian Navy.

Meanwhile, as TROPEX was on, Pakistan test-fired a Nuclear-Capable Submarine Launched Cruise Missile simultaneous with Aman-2021 Naval Drills that commenced off the Karachi coast. The large attendance for Aman-21 reportedly includes China, Russia, NATO members and the US was billed as a coup by Islamabad. While the exercises are also seen as a “project to build a positive image”, not much is achieved on-ground as compared to Malabar exercises last year between India, Japan, Australia, and the US – the Quad grouping.

China’s growing presence at sea and expansionist policies across land and maritime frontiers have been extended to the Indian Ocean under a collusive arrangement with Pakistan. China’s naval presence in the Indian Ocean, which began as a steady trickle in 2008, with deployments of warships for anti-piracy operations in the Gulf of Aden, has steadily grown to a permanent presence with at least three to four warships in the region at any given time.

Occasional forays of Chinese submarines in the waters of the Bay and Bengal and the Arabian Sea have also complicated the naval equations in the region. In January 2020, the strategic nexus between China and Pakistan achieved a new milestone when the navies of China and Pakistan completed their sixth bilateral naval exercise, titled ‘Sea Guardians-2020’, in the northern Arabian Sea.

TROPEX-21 assumes great significance amid a threatening security scenario and as India’s role increases in the IOR and the Indo-Pacific. This exercise was also aimed to validate the coastal defence set-up of the country, a Navy spokesperson said.

While India pursues a robust maritime policy, its expanding involvement in the region is attracting attention from its littoral neighbours through interactions and engagements in maritime cooperation and by creating strategic opportunities. India has become more active in the disputes over the Indian Ocean Region, and has been a vocal asset for the freedom of navigation and open trade in the IOR and has advocated for the peaceful resolution of disputes between China and its neighbours because India sees its maritime security as a domain of major concern with China’s growing influence amongst the ASEAN nations and in the IOR.

The Indian Ocean is increasingly becoming a stage of rivalry between India and China, while India becomes a preferred security provider for its littoral countries it can’t be the case with China for the nations in the Southeast Asia region. China’s contentions in the IOR are to protect its sea lines of communication through the Straits of Malacca, and the Hormuz Straits. The Hormuz Straits account for 40 per cent of China’s oil import and the Straits of Malacca accounts for 82 per cent of China’s oil import, popularly known as the ‘Hormuz-Malacca Dilemma’ and that is the reason why China is attempting at encircling India by building a string of naval bases to surround India’s neighbours and various neighbouring island states.

In the Indian Ocean’s geopolitics, the contest for strategic space has got hotter with China’s revisionist calculations resonating with Islamabad’s diabolical ambitions. The TROPEX exercise was a clear message to China and Pakistan of its nefarious design in keeping with the theme of being a ‘Combat Ready, Credible and Cohesive force’ in the India Ocean Region.