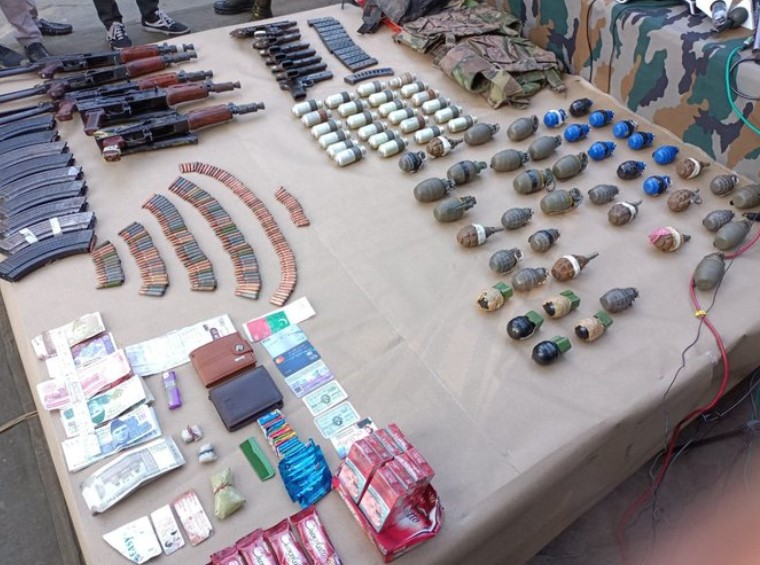 Infiltration continues all across the Line of Control in both Kashmir and Jammu and the main groups operating are Lashkar and Jaish, evidence reveals. BharatShakti investigated some of the infiltration cases between 2020-21 and accessed material evidence that establish direct proof how Pakistan is fanning state terrorism by upscaling terrorist activities in the region. This article is the second part of a series of exclusive reportage on Pakistan’s proxy war against India.

Sharp rise recorded in infiltration bids along Pakistan border as ISI continues to push terrorists. As many as 77 terrorists were killed and 12 arrested while trying to infiltrate into India from across the border last year, the government informed Parliament on 15 March. The same figure for 2020 stood at 99 and 19 respectively, it noted. Security forces have killed 39 terrorists including 10 foreigners (Pakistanis), including a commander of the Jaish-e-Mohammad (JeM) so far this year.

India and Pakistan had in February 2021 decided to resume their obligations in the ceasefire agreement between the two countries and subsequently, incidents of firing on the Indo-Pak border have gone down considerably. It was supposed to have an impact on infiltration as well. However, security establishment sources say Pakistan has continued to push terrorists across the border.

Investigation and analysis of the material evidence – FIRs, list of seizures made during anti-terror operations reveal a direct Pakistan Army’s hand in fomenting terrorism in the region. The following incidents are telling proof of Pakistan’s complicity.

It is believed to be the biggest infiltration attempt by terrorists from across the Line of Control in recent years coinciding with the fifth anniversary of the Uri attack. Six Pakistan origin terrorists of Lashkar-e-Toiba tried to infiltrate across LoC into the Indian side in Uri Sector of Baramulla district on 18 September 2021 which was foiled by alert Army troops. After a firefight, four terrorists, who were on Pakistan’s side of the fence, took advantage of the darkness and retreated towards the PoJK side. The remaining two terrorists, who were in the process of crossing the fence, sneaked into the Indian side. In a 10-day long operation, one of the two terrorists was killed and the other was captured eight days after they sneaked in by cutting the fence along the LoC.

The captured militant has been identified as Ali Babar Patra, a 19-year-old school dropout, a typical LeT recruit trained at Khyber camp, Garhi Habibullah. He is a resident of Okara in Pakistan’s Punjab. According to the FIR registered on 27 September, Patra was told by his Pakistani handlers to drop a supply (of arms) in the area of Pattan. Training and movement of LeT terrorist Ali Babar Patra (see the graphic below) 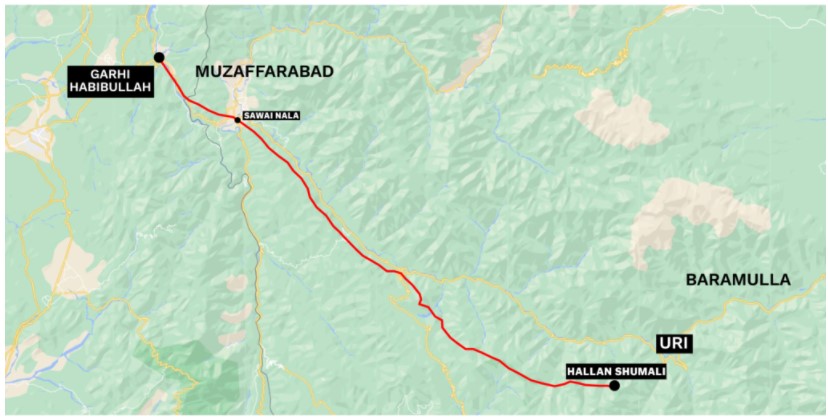 The recoveries and modus operandi of the infiltration was not possible without Pakistan’s help. The infiltration attempt was made in the area of Salamabad nallah. It is the same nallah that saw infiltration in 2016 when a suicide attack at Uri garrison took place. Probable infiltration route of terrorists as saved in the recovered mobile phone (see GPS map below) 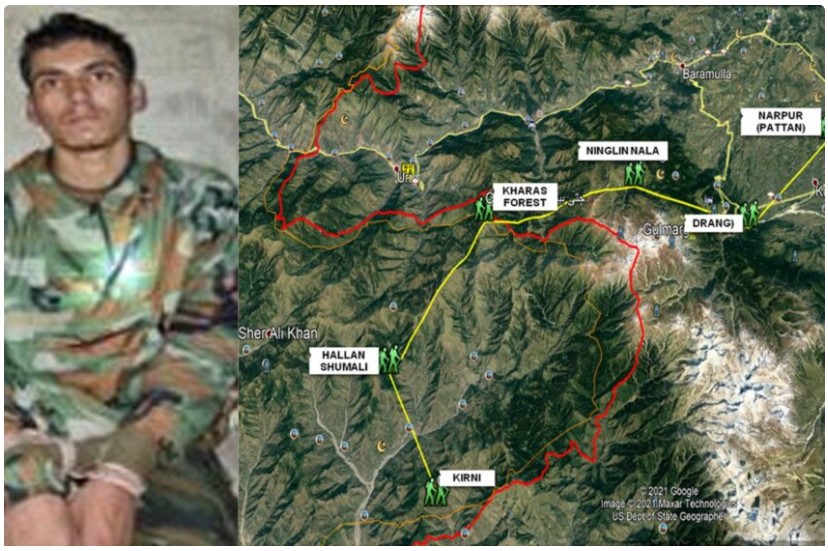 Confession of surrendered terrorists and analysis of recovered mobile phones and GPS unambiguously reveal the explicit role of Pak Army and ISI in fomenting terrorism in J&K. The infiltrating group was supported from Pakistan side by three porters, who had come to the LoC with the supplies. The movement of such a large group of people can’t take place without the active complicity of the Pakistan Army deployed on the other side, according to Army sources.

A mobile phone that has details of a chat between the terrorists and their handler and GPS devices (see pictures below) recovered from the terrorists establishes Pakistani complicity. 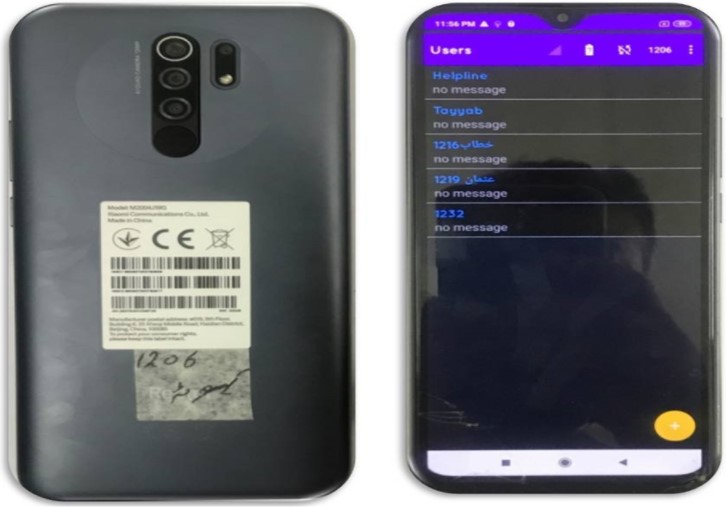 New Trend by Pakistan to Use Pistols in Kashmir 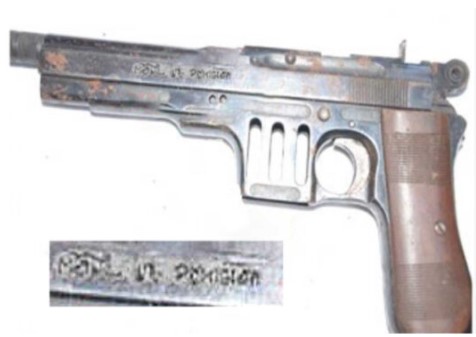 Pakistan has adopted a new modus operandi to use pistols in Kashmir as it is easy to carry out strikes to kill unarmed policemen and civilian. This is a new trend which was noticed during an attempted infiltration bid foiled by Indian Army in which it had eliminated 3 terrorists, who had crossed over from POJK into the Indian side in the Rampur sector near Uri on LoC in Baramulla district on 23 September. Army recovered 5 AK-47s, 5 pistols and 69 hand grenades all with Pakistani markings from the terrorists killed in the operation.

Recoveries from the terrorists included a Sehat Insaf Card issued by the Pakistani government as a health insurance initiative and two ATM cards of UBL, a private bank headquartered in Karachi, issued in the name of Tanveer Ahmed Butt (pictures given below). 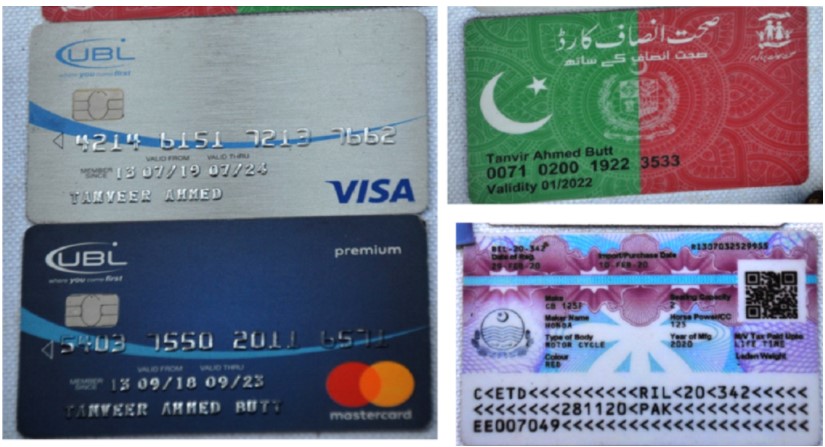 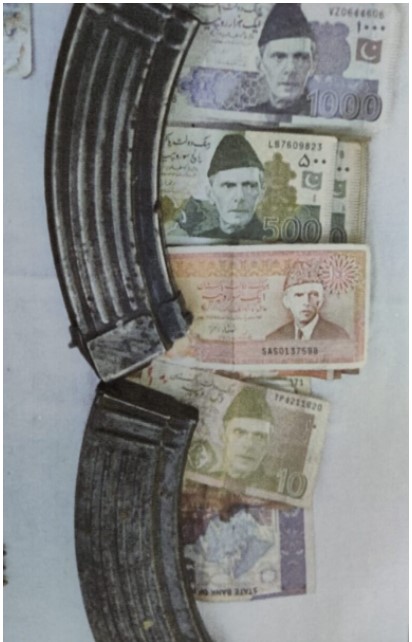 It is also noticed that Pakistan Army has adopted to a new strategy to push in more arms and ammunition instead of more terrorists and that is the reason why terrorists attempting infiltration have been found with more sophisticated armaments, that has taken security agencies by surprise.

Meanwhile, the ‘infiltration season’ has begun and the terror launch pads across the border are full and attempts are being made to infiltrate from the Kashmir side as well as the Jammu side. There are about 150-200 trained terrorists still active out of which around 45 per cent are of Pakistani origin. Intelligence inputs warn that Pakistan is unlikely to stop fomenting trouble in Kashmir as there have been regular infiltration attempts despite a ceasefire agreement.