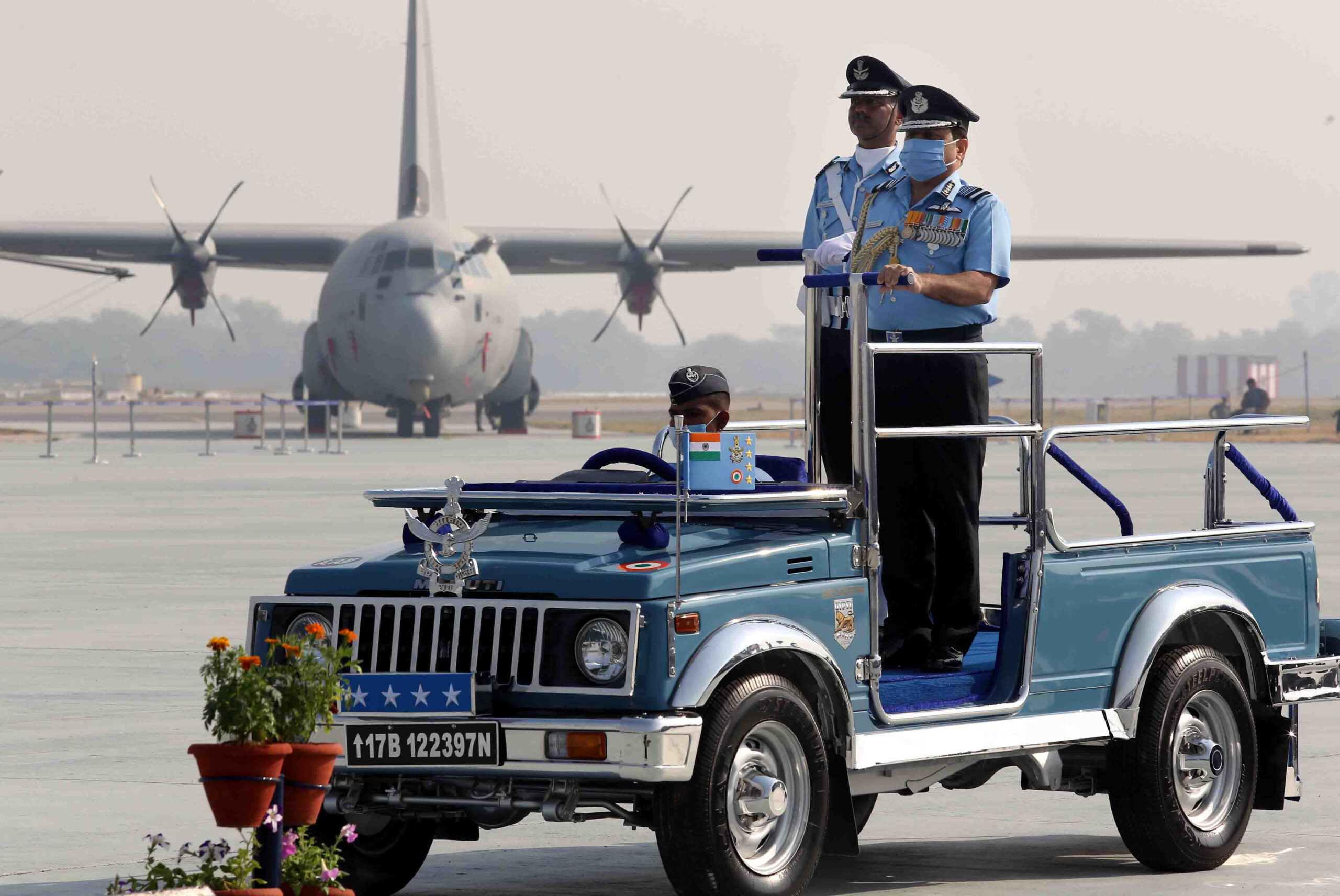 The Indian Air Force (IAF) rapidly mobilised and deployed most of its combat assets in Ladakh following massive aggression by Chinese in the summer of 2020. That swift action by the IAF created a strong deterrence, says Air Chief RKS Bhadauria in this exclusive interview to our Editor-in-Chief Nitin A. Gokhale even as the Aero India-2021 kicks off in Bengaluru later today.

RKS Bhadauria, Chief of Air Staff (CAS) – The situation along the LAC is tense with soldiers from both sides deployed in close proximity. As you are aware, the 9th round of India-China talks between the military commanders was held on 24th Jan and both sides are working towards an early disengagement of troops. While we are hopeful that the positive momentum of these talks would eventually result in diffusing of tensions, at the same time, we have to be alive to the possibility of unpredictable actions by the PLA which could result in rapid escalation. IAF is ready for any such emergent contingencies.

NG –  The IAF mobilized most of its assets very quickly in the face of the Chinese aggression last year? What are the lessons from the on-going operation?

CAS – Even during peace time, IAF maintains a heightened state of alert. With our current capability, the IAF is capable of forward deployment at very short notice. The same was exercised after the Galwan incident; wherein we activated and forward deployed our frontline combat assets. In addition, deployment of attack helicopters and fighters in the Ladakh sector acted as a credible deterrent. Our heavy-airlift platforms played a pivotal role in the unprecedented mobilization of ground forces in the Northern sector.  There are always lessons to be learnt from such massive deployments and we continue to refine and evolve. Challenges in maintenance of equipment at high altitude and extreme weather have been some of the key takeaways which we are addressing.

NG –  Is the IAF working to overcome infrastructure gaps, if any, in the Eastern sector considering that could be the next trouble spot?

CAS – On my recent visit to EAC AoR, I was happy to see the pace of infrastructure up-gradations towards meeting requirements of new inductions and operational meeting imperatives. Chinook helicopters have started operating from one of the two earmarked bases under EAC with infrastructure development nearing completion at the second base. Infrastructure for Rafale will also be ready by the time the second Rafale squadron is inducted by EAC.

We are interacting closely with State Governments towards expansion of ALGs. Existing ALGs in the North East have been secured and upgraded by putting in place additional resources and equipment for the integral security set up.

NG –  With a two-front war almost looking like a reality, is the IAF prepared to tackle the growing collusive threat from China & Pakistan?

CAS – Our operational plans are continuously updated and evolved based on the threat matrix. IAF is prepared for a rapid and robust response to any external aggression.

NG –  Is the induction of Rafales on schedule? How has the Rafales joining the combat fleet helped? Has it sent the required message to India’s adversaries?

CAS – With the latest addition of three more Rafales on 27 Jan 21 which flew non-stop from France with en-route refueling by UAE Air Force MRTT, the strength has increased to 11 aircraft. This is as per the scheduled induction plan.

Without any doubt, the aircraft has provided a significant boost to the IAF’s overall combat capability. The outstanding weapon carrying capability, in terms of advanced BVRs and precision long-range stand-off A-G weapons complemented by state of the art avionics has provided the IAF with a decisive edge over our adversaries. The induction has undoubtedly reduced the bandwidth of misadventure by our adversaries.

NG –  Given the increasing threats, IAF needs to get its combat fleet back to required strength as soon as possible. What is the roadmap for enhancing the combat fleet in the next 10 years? What is the status of the MRFA proposal?

CAS –  IAF is committed to increasing its Squadron strength in a pragmatic manner and we are taking concurrent steps in this direction. In addition to the Rafale induction, we are expecting the delivery of 24 remaining LCA aircraft to be completed in the next three years, after which the 83 LCA MK1A will start joining the IAF fleet. To augment the existing fleet of Su-30 MKI and Mig-29 aircraft, AoN for 33 aircraft has been accorded and draft RFP is under collegiate vetting stage. These will start flying with us in the next couple of years.

AMCA program is being vigorously pursued with the aircraft likely to be operational around 2032.

Procurement of the 114 MRFA through Make in India route will augment our fighter strength and enable us to induct advanced technologies not currently available. We have received response from multiple vendors to our RFI.
While the entire process will be executed under the provisions of the DPP 2020, the selected OEM will have to comply with our requirements of Transfer of Technology and Make in India that would add to our indigenous fighter aircraft manufacturing capability.

NG –  What are your views on the budget?

NG –  The order for 83 additional Tejas Mk1A has been placed. There must have been major improvements made for it to have earned your trust. How would you rate the Tejas compared to the Chinese fighters it might have to face?

CAS –  The LCA Mk-1A is an upgraded version of the existing LCA Mk-1 aircraft operational with IAF. The LCA Mk-1A possesses critical operational capabilities such as Active Electronically Scanned Array (AESA) Radar, Indigenous ASTRA beyond Visual Range (BVR) missiles, Integrated Electronic Warfare (EW) Suite and Air to Air Refueling (AAR) capability. The maintainability improvements would enable shorter operational turnaround time.  Overall it would be a potent and contemporary platform to meet the operational requirements of IAF in this category.

The capabilities of Tejas are comparable to the Chinese fighters and superior to Pak-China made JF-17.

NG –  How would the Tejas order help the Indian defence manufacturing ecosystem? Would this prove to be a base for future development of aircraft in India and particularly in the AMCA project?

CAS – LCA Mk-1A is planned to be indigenously designed, developed and manufactured and would bolster the Make in India initiatives of the nation. With close to 500 indigenous design and production agencies being involved in the design and production of LCA technology and components, the present procurement would further strengthen the existing Indian aerospace ecosystem and provide it with the necessary impetus. Further, the LCA Mk-1A programme would provide opportunities for overall economic growth and create job opportunities for MSMEs involved in the programme.

The LCA variants and AMCA will define the structure of the IAF fighter fleet in the coming two decades. The experience of capability enhancements on LCA MK1A will surely add to the design and technology that will go into AMCA.

NG – Are you happy with indigenous missiles that are planned to be inducted into the IAF in coming years? How has the Akash experience been?

CAS –  The indigenous missile systems currently in service include the Akash Missile System (AMS) which was inducted into the IAF in 2014. The system is robust and proven to be reliable. The Akash missiles showed consistent accurate results during the recently conducted annual exercise “Combined Guided Weapon Firing (CGWF)”. It has lived up to the expectations in terms of its capability. The future indigenous systems are being built on the experience of the AMS and are likely to be further advanced in terms of capability especially performance in high altitude areas.

NG –  What are your expectations from the upcoming Aero India being held under trying circumstances? What have been the challenges in organising the show?

CAS –  Aero India-2021 is an ideal platform to showcase the strides India has made in indigenous defence manufacturing sector. Several foreign exhibitors are also expected to participate in the show and display the latest in aerospace technologies. I am sure that the interaction between the domestic and foreign industry will create new avenues of civil and military aerospace cooperation which would boost our Make in India initiative.

Additionally, one of the major events of the show is the Chiefs of Air Staff (CAS) Conclave which will be organised on 03 & 04 February 2021. The Conclave is aimed at exchanging ideas and best practices with global aerospace powers as well as with emerging and neighbouring Air Forces on themes of contemporary relevance in the aerospace domain.  Besides the presence of Chiefs and senior level delegations, virtual attendance of dignitaries has also been catered for facilitating larger attendance.

The biggest challenge in organizing the show has been the restrictions due to Covid which has resulted in slightly reduced participation compared to the previous editions. To mitigate this, exhibition and events are being organized in a hybrid manner with both physical and virtual participation.

NG – Thank you, Air Chief Marshal Bhadauria, for taking out the time for BharatShakti.in.