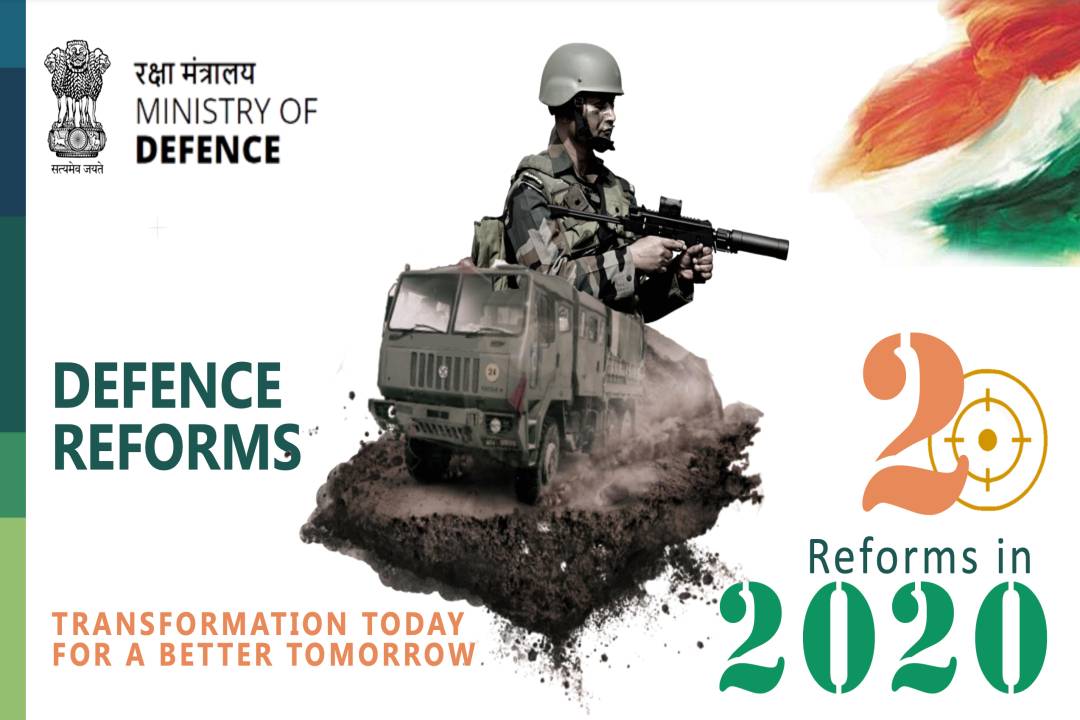 Defence Minister Rajnath Singh released an e-booklet titled “20 Reforms in 2020” highlighting the major reforms undertaken by the Ministry of Defence (MoD) on 7 June, in the capital. The Minister termed the E-booklet as an important document on the bright future of the defence sector in the country.

“The booklet is a reflection of the resolve of the Government, under the able leadership of Prime Minister Narendra Modi, to make the defence sector stronger and more efficient,” he said. Singh expressed confidence that the reforms undertaken by the Ministry will make India a global powerhouse in the defence sector in the times to come.

The compilation provides a brief overview of defence reforms undertaken in the year 2020 by the MoD to bring about greater cohesion and modernisation of the Armed Forces through policy changes, innovation and digital transformation. Reforms are also focused on the ‘AatmaNirbhar Bharat’ (self-Reliant India) initiative, increased collaboration with the industry to boost defence exports, measures to accelerate defence acquisitions with greater transparency, digital transformation, strengthening of border infrastructure, transformation in R&D and increased participation of women in Armed Forces.

The appointment of India’s first Chief of Defence Staff (CDS) and creation of Department of Military Affairs (DMA) were among the major decisions taken by the Government. The post of CDS was created to increase efficiency and coordination among the Armed Forces and reduce duplication, while DMA was established to ensure improved civil-military integration. General Bipin Rawat was appointed as the first CDS who also fulfils the responsibilities of Secretary, DMA.

To promote ‘Make in India’ in defence sector, a list of 101 defence items was notified in August 2020, while Defence Acquisition Procedure 2020 was unveiled in September 2020. From the defence budget Rs 52,000 crore was earmarked for indigenously made defence equipment in 2020-21. Corporatisation of Ordnance Factory Board (OFB) was approved in May 2020 for greater efficiency and productivity. There was an unprecedented push towards new technology developments within India. Bharat Electronics Limited (BEL) developed a ventilator in record time to meet Covid-19 requirements in May 2020. In November 2020, Quick Reaction Surface to Air Missile, indigenously designed and developed by DRDO, hit bull’s-eye at medium range and medium height, while indigenously built Pinaka rocket system cleared test of 45-60 km range.

The increased partnership with the private sector has led to a substantial rise in defence exports. The value of total defence exports rose from Rs 1,941 crore in 2014-15 to Rs 9,116 crore in 2019-20. Also, for the first time, India figured in the list of defence equipment exporting nations, as the exports expanded to more than 84 countries.

In a highest-ever thrust to modernisation in last 10 years, there was a 10 per cent increase in the 2020-21 budget over the previous year. Policy reforms for increased transparency included launch of new Defence Acquisition Procedure in September 2020 and revision of DRDO Procurement Manual in October 2020. To encourage start-ups, a provision was introduced for procurement in  new category of Buy Indian-IDDM, while leasing for non-mission critical requirements was introduced for the first time.

First five Rafale fighter aircrafts arrived in India in July 2020 and several more since then, adding firepower to the arsenal of the Indian Air Force.

To promote innovation by young minds, five Young Scientists Laboratories of DRDO were launched in 2020 in Bengaluru, Mumbai, Chennai, Kolkata and Hyderabad. DRDO has joined hands with the private sector in design & development and identified 108 Systems & Subsystems for the industry to design, develop and manufacture.

Reforms of processes and workflows within Border Roads Organisation (BRO) enabled it to achieve targets ahead of schedule, in some instances.  World’s longest Atal tunnel above 10,000 feet, at Rohtang on the Leh-Manali Highway was inaugurated by Prime Minister Narendra Modi in October 2020. It provides all weather connectivity to the northern borders. Zojila pass, situated on the Srinagar-Kargil-Leh National Highway, was opened almost a month ahead of schedule in April 2020.

In 2020, Ministry of Defence took some historic decisions to increase participation of women in the Armed Forces. Ten streams of Indian Army were opened for giving Permanent Commission to Short Service Commission (SSC) Women officers, while women pilots of Indian Navy were operationalised for the first time. All Sainik Schools were thrown open for girl students from academic session 2020-21.

Expanding the reach of NCC to remote locations was a major announcement made by Prime Minister Shri Narendra Modi from the ramparts of Red Fort on Independence Day on August 15, 2020. More than 1,075 schools/colleges in border and coastal areas were identified and the enrolment began in November 2020. In another decision, it was decided to give preference to NCC cadets in employment in Central Armed Police Forces from May 2020. Youth Exchange Programme Allowance for NCC cadets was increased from Rs 100 per day to Rs 750 and the number of countries was increased from 10 to 15.

Aid to civil administration during COVID-19

Ministry of Defence and the Armed Forces have mobilised resources to aid the civil administration in fight against COVID-19. Armed Forces Medical Services (AFMS) provided all emergency support to tide over the situation. They have mobilised doctors, health professionals and set up Quarantine facilities at several locations across the country. DRDO has set up several hospitals to treat COVID patients across the states, passed on technology expertise to manufacture ventilators, oxygen plants, medicines, test kits and PPE kits to private sector for mass production.

The e-booklet is available on the website of Ministry of Defence: