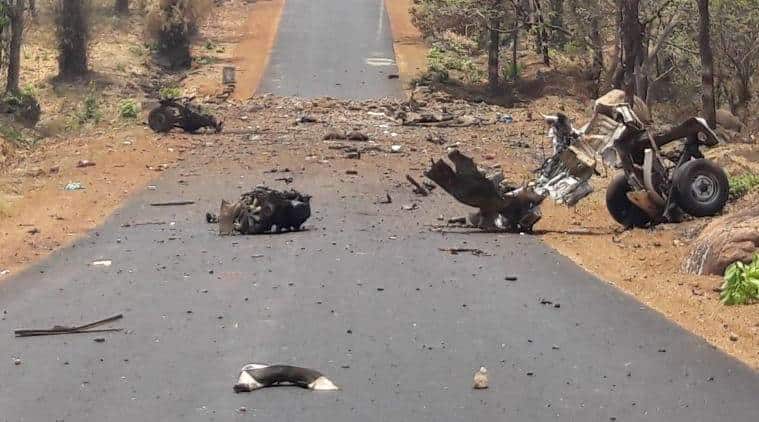 The Gadchiroli Naxal attack on May Day comes just days after BJP’s Dantewada MLA Bhima Mandavi being killed in a Naxal attack in Chhattisgarh on April 9. At least 21 persons dying in two back-to-back attacks have once again brought the focus on not just the heightened threat posed by Left Wing Extremism (LWE) but also questions the government’s action plan and strategy to tackle the menace.
The fight against the left-wing insurgency has been characterized by a high casualty count of security personnel. It is indeed incomprehensible that despite the five-decade-long insurgent movement there seems to be no clear strategic approach to the problem.
The fresh attack on the C-60 commando unit of Maharashtra police that claimed 16 lives in the IED blast, was the deadliest since the April 2018 attack on a CRPF convoy that killed 25 personnel in Sukma, Chhattisgarh. The Sukma attack was reminiscent of the biggest ambush ever at Dantewada in April 2010 when Naxals killed 76 CRPF personnel.
As many as 12,000 people have lost their lives in LWE violence over the last two decades, including 2,700 personnel of the security forces. 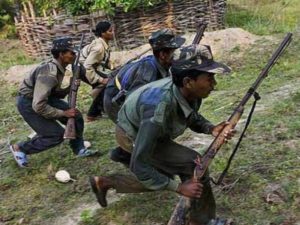 According to the Union Home Ministry (MHA), those killed include 9,300 civilians who were either eliminated by the Naxals, after being labelled as `police informers’, or were caught in the crossfire and became victims.
However, there has been a significant drop in LWE violence in the last three years, notwithstanding occasional reverses suffered by the security forces. The number of violent incidents has come down to 908 in 2017 from a high of 2258 in 2009. Security forces killed 232 Naxals in 2018. The elimination of Naxal cadres rose by a sharp 65 per cent and the number of extremists surrendering recorded an increase of 185 per cent according to statistics prepared by the MHA.

MHA’s latest report of February this year states that 90 per cent of Naxal activities were limited to 35 districts. However, as of now, they have a hold in limited pockets in 90 districts spread over 11 States, as against 223 districts in 2008. The worst affected districts are spread in Maharashtra, Chhattisgarh, Odisha, Andhra Pradesh, Bihar, Jharkhand and West Bengal. The affected areas are predominantly tribal zones as well as forest and mineral-rich areas.
While the number of attacks on security personnel may have reduced in the past few years, they have concurrently demonstrated their ability to carry out fatal attacks on security forces at will. In dealing with a problem like left-wing insurgency one needs to look beyond the numbers. Numbers are always deceptive in a conflict situation because they only portray half the truth.
A very significant development took place in November 2018 that could lead to a perceptible change in the course of the left extremism movement in India was the stepping down of Ganapathy and elevation of Baswaraj as the General Secretary of the Communist Party of India (Maoist). Known to be extremely tech-savvy and equally strong in his ideological commitment and military craft, Baswaraj is a fervent advocate of the Tactical Counter Offensive Campaign (TCOC) to blunt counter-insurgency measures. Intelligence units had warned that his experience of leading the People’s Liberation Guerrilla Army (PLGA) could result in a possible escalation of violence in the coming days.
Recent attacks proved their apprehensions right. As an intelligence officer revealed, “The Naxalites in India are now under the leadership of Basavaraj and there has been a shift in tactics from ambushes to greater use of improvised explosive devices (IEDs). There were enough evidence and reports that indicate that Naxal cadres were undergoing training to conduct major offensives, targeting politicians, security forces and electoral officers in the run-up to the Lok Sabha elections.”
Lamentably, India’s counter-Naxal strategy is yet to find answers to the Naxals’ use of landmines that led to massive loss of lives of the security forces. Successive ambushes and attacks have shown the vulnerability of the paramilitary forces and police parties in the Naxal 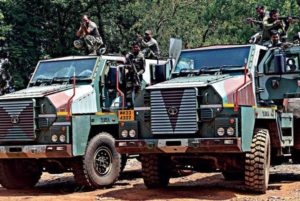 The police C60 commandos in their mine protected vehicles in Gadchiroli (Image Courtesy: India Today)

areas. The damage and loss of life from attacks with grenade launchers and improvised explosive devices (IED) can be lessened by movement in armoured vehicles. However, there are huge shortages of Mine Protected Vehicles (MPV). In 2010, the Centre had sanctioned acquisition of 350 MPVs for the CRPF, but by March 2017, there were only 122 MPVs with the CRPF.
The inadequate combat capability of security forces in Naxal-affected states remains the prime factor for failing adequate security response. Apart from the obvious inadequacies in combat capability, the use of technology including drones to enhance surveillance to prevent ambushes is also inadequate.
Lack of institutionalised real-time intelligence-sharing between states is being clearly utilised by the Naxals in their favour. In a conflict like Left Wing Extremism that India faces, it’s not high tech intelligence alone but human intelligence that holds the key. It is local support for the Naxals that makes it difficult for the security forces to procure accurate information about the insurgents. On the other hand, Naxals get information on security forces’ logistics through villagers.
Additionally, Naxals are extremely familiar with the topography of the forest land and the hilly terrain. Meanwhile, security forces find it difficult to keep pace with the Naxals as they fall short on accurate knowledge of the terrain.

Clearly, the new Naxal leadership is posing a greater challenge to the government. The time has come for a complete transformation of the internal security apparatus driven by new-age technology and far superior training.