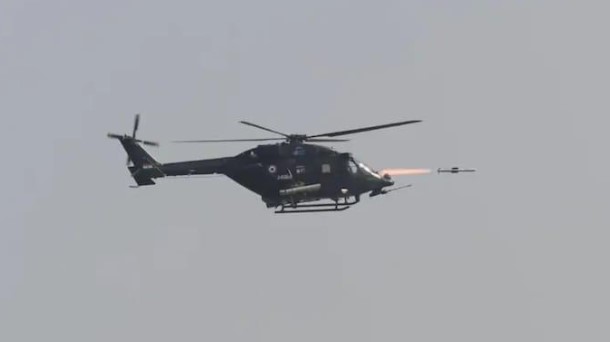 The Ministry of Defence (MoD) approved three procurement proposals – two for the Indian Army and one for the Indian Navy – amounting to Rs 4,276 crore under the Buy (Indian-IDDM) category to bolster the combat capabilities of the armed forces.

In a meeting of the Defence Acquisition Council (DAC), held on 10 January under the Chairmanship of Defence Minister Rajnath Singh, accorded Acceptance of Necessity (AoN) for the procurement of indigenous HELINA Anti-Tank Guided Missiles, launchers, and associated support equipment, which will be integrated to the Advanced Light Helicopter (ALH). This missile is an essential part of the weaponisation of ALH for countering the enemy threat along the Line of Actual Control (LAC) with China.

“Its induction will strengthen the offensive capability of the Indian Army,” the Ministry said in a statement.

The DAC, which is the MoD’s highest decision-making body on the acquisition, also cleared procurement of a batch of VSHORAD missiles to boost the air defence system along the LAC. While two procurement proposals were for the Army, the third was for the Indian Navy.

Designed and developed by DRDO (Defence Research and Development Organisation), the VSHORAD (IR Homing) missile system is man-portable and can be deployed quickly in rugged terrain and maritime domain. “Procurement of VSHORAD, as a robust and quickly deployable system, will strengthen the Air Defence capabilities,” the MoD stated.

“Further, the DAC granted approval for procurement of Brahmos Launcher and Fire Control System (FCS) for the Shivalik class of ships and next generation missile vessels (NGMVs) for the Indian Navy,” it said. “With their induction, these ships would have enhanced capability of carrying out maritime strike operations, interdicting and destroying enemy’s warships and merchant vessels,” the Ministry added.

India has been bolstering its overall combat capabilities along the LAC in view of the eastern Ladakh border standoff. Last month, the Defence Ministry approved the procurement of a number of military platforms and weapons, including light tanks, anti-ship missiles and long-range guided bombs amounting to Rs 84,328 crore.