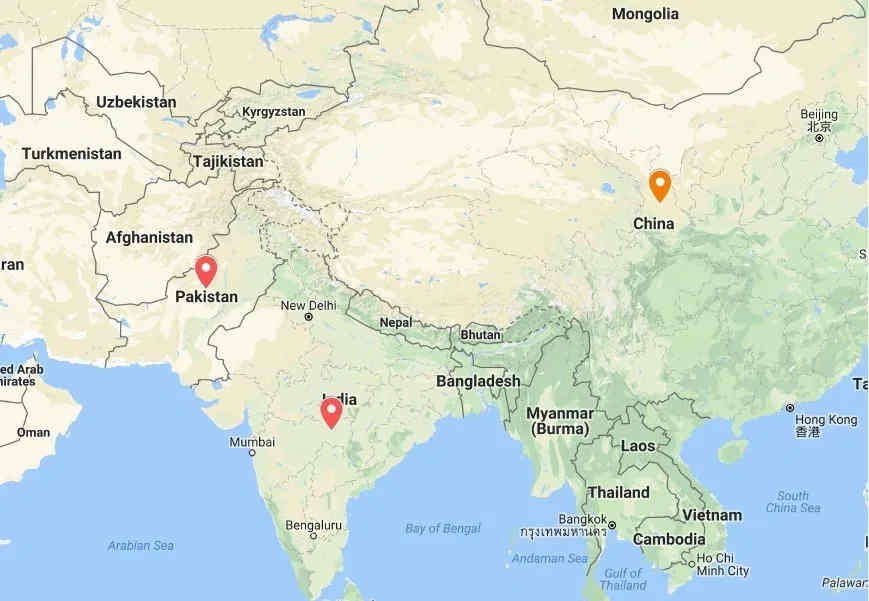 Gwadar Port a Golden Goose for China; Shot in the Dark for Pakistan

The Chinese Belt and the Road Initiative’s (BRI) flagship project remains the China Pakistan Economic Corridor (CPEC). The CPEC’s arterial road lifeline runs 3000 km and links Kashgar, in Xinjiang, an autonomous territory in northwest China, along the Karakoram highway, through the Khunjerab Pass, further southwest through Gilgit – Baltistan in Pakistan occupied Kashmir to Islamabad and then to Gwadar. The Gwadar Port is also a point of confluence between the Chinese Maritime Silk Road and the BRI. China expects huge economic and strategic benefits from CPEC. Debt-ridden Pakistan expects to tide over its current dire financial state and simultaneously develop stronger strategic ties with the Chinese that offer greater resilience against India.

The strategic import of Gwadar needs to be viewed in the context of the Chinese String of Pearls. The string includes Kayakphu Port in Myanmar, ports in Bangladesh and Hambantota, Sri Lanka. Gwadar in Baluchistan province of Pakistan completes the string around India. The string is extended further west with the Chinese base in Djibouti. Gwadar has the potential to provide the Chinese a base permanently in the Arabian Sea and extend its Navy’s logistics support capabilities to the Gulf of Oman. If the base at Djibouti is taken into consideration, Chinese capabilities would cover up to the Gulf of Aden and the east African coastline. The Chinese are also creating a facility at Daqm Port, Oman.

The Gwadar Port reduces the distance from West Asia to China via the Malacca Straits by as much as 10 to 12 days. It provides an alternative to the Malaccan dilemma that it perennially faces. Further, Gwadar provides the Peoples Liberation Army Navy (PLAN) with a base to protect its logistics lifeline through the sea lanes of the Indian Ocean. The oil and gas pipelines planned along the Gwader – Kashgar route will also allow substantial transhipment of west Asian oil through the pipeline, thus avoiding the Malaccan choke point, albeit at a much higher cost. The CPEC and Gwadar Port also provide access to the Central Asian countries and Iran to China. Gwader Port could be a hub for landlocked Central Asian Countries for access to the sea lanes.

Viewed from an Indian perspective and that of other major players in the Indian Ocean, the possibility of a Chinese naval base in the Arabian Sea has ramifications for the Indian Ocean Region (IOR) and Indian west coast. Having established a fair degree of dominance in the South China Sea, the PLAN is already prowling in the Indian Ocean.  A base at Gwadar provides it with a capacity leap in the IOR. It allows China to protect its shipping while enhancing its capability to monitor traffic in the area.

Currently, the Gwadar Port has three multipurpose berths, and an approach channel of 4.5 km with a dredged depth of 12.5 meters. Other major projects under construction or planned include nine new multi-purpose berths, a six-lane East Bay Expressway that will connect Gwadar to the Makran Coastal Highway. The project is scheduled for completion this year. Rail connectivity to the harbour is also planned. Meanwhile, a greenfield international airport is also under construction at Gwader. The project was started in 2019 as an early harvest high-priority work. It’s due to be completed in 2022. A desalination plant and hospital are catered for.  Also on the cards are coal fired power plant, a petrochemical complex and a refinery. By 2045, Gwadar is expected to have a hundred berths.

The Gwadar – Karachi internal container service was launched in 2018 to take advantage of the coastal trade. The port was officially opened for commercial traffic in late 2019. However, right from the beginning, inadequate coastal traffic, preference by Afghans to use Chabahhar Port and drop in transhipment of construction material for the Gwadar project by sea has kept its utilisation at marginal levels. The free trade zone planned at Gwadar has also not progressed as planned, resulting in further impeding the growth of import and export volumes. This is despite a tax holiday ranging from 20 to over 40 years having been announced by the Pakistan Government in 2016. COSCO, a Chinese shipping company was running the container line and has stopped the service.

Indian Ocean powers have to take into account three aspects among others of the PLAN in arriving at possible force projection by the Chinese Navy in the IOR. The Chinese have two aircraft carriers today and will have five to six by 2030. The Chinese submarine strength is close to 70 as of now. Gwadar is a deep seaport that can provide ample logistics support once fully developed. Finally, the PLA Navy Marine corps is expanding. It would be prudent to delve into the Marine Corps expansion in more detail.

The Chinese would have plans of deploying Marines at Gwadar. Currently, they have a Marine contingent at Djibouti. Though the Chinese army is reducing its strength by about three lakhs, it’s poised to enhance the strength of PLAN and PLAN Marine Corps. PLA recently transferred two brigades from the Army increasing the Marine strength to four brigades. The objective is to create a 100,000 strong Marine Corps giving the Chinese a huge expeditionary capability. The offshore deployments could be primarily Djibouti and Gwadar. Parallelly, China is building large amphibious landing dock ships with some of these ships having a capability to carry up to 30 helicopters.

When all three issues of their aircraft carriers, submarine strength and Marines are put together, China’s global dominance ambitions are quite obvious. The Chinese exercised with Pakistan in the Arabian Sea in January 2020. The Chinese assets that took part according to a report in The Nation, a Pakistani newspaper, included a Guided-missile destroyer Yinchuan, the guided-missile frigate Yuncheng, a comprehensive supply ship Weishanhu, and the submarine rescue ship Liugongdao. The Indian response led to positioning its aircraft carrier INS Vikramaditya on the western coast.

The evolving of the Quadrilateral of USA, Australia. Japan and India in the IOR is the most potent response possible to the emerging Chinese threat. The gradual induction of more IOR countries in the Quadrilateral arrangement is the next step. However, democracies move at a snail’s pace, notwithstanding the threats. Only if these four countries are able to undertake force projection jointly, can other IOR states be influenced into committing their resources? Otherwise, the fear of Chinese reprisals and the fact of their economies being bound to the Chinese would continue to deter them.

India has to realise that it’s the most threatened state in these scenarios. The Chinese have to prove they are the all-important regional power before they get to the global stage meaningfully. If the Chinese were to act in concert with the Pakistanis, our west coast will witness huge manoeuvres of their naval forces in unison. There are no better arguments required to promote a higher defence outlays by Indians.

The COVID 19 pandemic and the gullibility/ design/ negligence of the Chinese leading to its global spread, has the Chinese ratings dipping in most countries. IOR states look at India to play the stabilization role. But to make a convincing argument our force preparedness levels need a sustained spike.

The CPEC has alienated Pakistanis quite sharply all along its run. In China, the Uyghur problem poses a threat to CPEC. As we cross the Khunjerab Pass, Gilgit – Baltistan is also restive. Further south KhybarPakhtunwa isn’t stable either. Closer to Gwadar Port, the Baluch insurgency has already instilled caution in the Chinese. The CPEC passes through some of the most disturbing areas globally that have witnessed violent movements with proven resilience. If India decides to respond in the same vein as Pakistan has been doing in Kashmir, the CPEC and Gwadar port could prove to be less viable propositions.

It’s important to ensure countries in India’s neighbourhood like Maldives, Sri Lanka, Bangladesh, Myanmar and also major South Asian countries like Indonesia, Malaysia Vietnam and Philippines don’t get into the Chinese orbit any more proximately than some of them have already. These countries must retain their strategic independence. Such a situation is possible only if the Quadrilateral becomes a meaningful arrangement.

An alternative to the BRI needs to be pursued with vigour. Australia, India, USA and Japan have been discussing the modalities for such an alternative. India and Japan have also been acting together on the issue; an example being the two countries’ involvement in Hambantota.

Meanwhile, the Chinese are trying new combinations. Last year, Russia, China and Iran carried out a naval exercise near the Gulf of Oman. The exercise began at Chabahhar, the Iranian port being developed by India. These exercises are over and above Chinese naval and research ships entering Indian EEZ. The strangest PLAN deployment so far has been submarines as part of its anti-piracy deployment off the Somali coast.

Pakistan’s stability, inability to repay debts and only marginal gains for its economy, are issues that have apparently been swept under the carpet. Gwadar may be the golden goose for the Chinese, but for Pakistan, it’s a loss of strategic freedom. Ethnic fault lines in Baluchistan will only widen. Pakistan’s economy will be bound hand and foot to the Chinese. Even if CPEC were to succeed, Pakistan will be deep in debt. Interest rates on Chinese loans are steep. 91 per cent of revenues from Gwadar Port is to go to China.

It would be prudent for Pakistan to recall that Sri Lanka had to grant a 99-year lease and 70 per cent stake in Hambantota Port to China. Maldives owes China 1.5 billion or 30 per cent of its GDP. Djibouti’s provided with the first major base to China in the African continent and now owes 80 per cent of its GDP to China. Pakistan already owes China more than twice the money it owes IMF in the next few years.

Baluchs have barely been consulted when issues about their homes and hearths have been decided upon.  Till 1958, Gwadar was an overseas possession of the Sultanate of Oman. Pakistan bought it for US$ 3 million after the Indians reportedly refused an offer. Gwadar was later amalgamated in Baluchistan. Today, that US$ 3 million investment by Pakistan is the biggest driver for China’s US$ 60 billion investment in CPEC. However, when Pakistan gave a 45- years lease over Gwadar Port to the Chinese, no one consulted the Baluchs. The Baluch anguish is quite understandable.

The building of large bases in the Indian Ocean by the Chinese needs to spur India and the other members of the Quadrilateral. The COVID-19 has led to a better understanding of the need to resist Chinese aggressive intent globally. The bilateral dialogue mechanisms between India and other Quadrilateral members does help the group’s cohesion, however, the commitment to deploy forces together by these countries for ensuring stability in the IOR, is as yet not an obvious intent of the group.