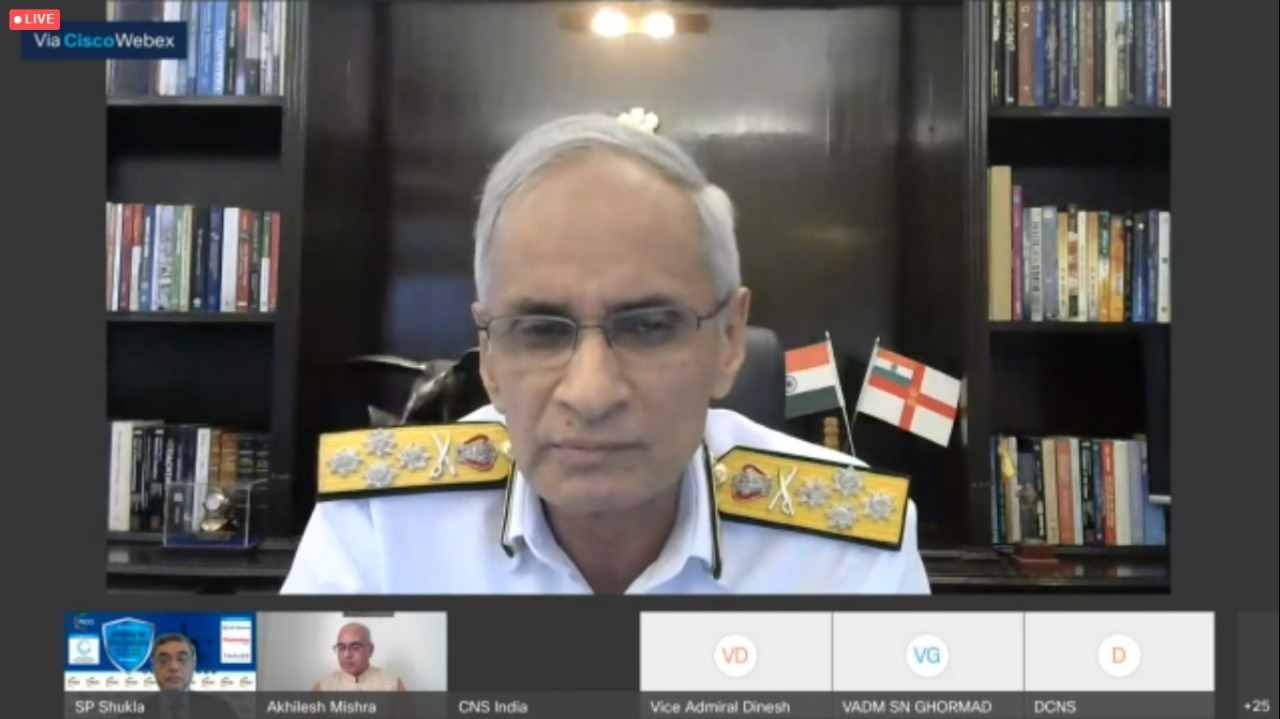 The Blue Economy holds out a promise and hope as a new frontier and engine of global growth amidst the gloom of the COVID-19 pandemic that has damaged the global economy, said Chief of Naval Staff Admiral Karambir Singh. With India aiming to emerge as a $5 trillion economy, the only way to achieve this is to move outwards as the oceans provide a vast resource pool that can be tapped to spur India’s economic growth. “The Blue Economy contributes about 4 per cent of India’s GDP, there is tremendous potential to expand its contribution,” the Navy Chief opined.

In his address during a webinar on ‘Securing the Blue Economy’ held on 23 April, the Navy Chief highlighted how India is progressing towards harnessing the blue economy and the role that the Indian Navy is playing to ensure a safe, secure and stable maritime environment.

Speaking about the role of the Indian Navy in harnessing the blue economy, Admiral Singh emphasized that the Indian Navy would remain focussed on contributing its might to support the Blue Economy efforts of the Government of India. In this endeavour, the Navy aims to be, both, an enabler and an element of national and regional Blue Economy efforts. “We have the resources, assets and domain expertise for mapping, characterising, monitoring as well as enforcing good order at sea. The Navy aims to create an enabling ecosystem that supports the Blue Economy,” he added.

“The Indian Navy is a key stakeholder in realising this vision and its strength lies in ensuring safety, security and good order at sea. This is critical to enable commerce and for trade to thrive in a stable and sustainable manner. The Navy’s efforts aim to contribute to the core objectives of the UN Sustainable Development Goal 14 to preserve, protect and conserve ocean spaces and resources,” observed the Navy Chief.

He further said that the oceans have an annual gross value of $ 2.5 trillion that makes it the 8th largest global economy and ocean-based trade is likely to quadruple by 2050. “Two-thirds of the food production will be farmed from the seas, and clean offshore wind energy will be the leading power generation technology in the next few years,” he added.

The Navy is also supporting organizations such as Indian Ocean Rim Association (IORA) in their regional efforts towards developing a common vision in developing the blue economy. The 23-member grouping has emphasised the development of the Blue Economy through a common vision for balanced economic development in the Indian Ocean Rim. We support this initiative through participation in various working groups, preparation of HADR SOPs, as also information-sharing on critical issues through an MoU between the Navy and IORA Member States, informed the Naval Chief.

Akhilesh Mishra, OSD (DPA), Ministry of External Affairs informed that India is in the process of developing its own comprehensive Blue Economy policy framework, which will cover coastal economy, tourism, marine fishery, technology, skill development, shipping, deep-sea mining, and capacity building in a holistic manner. He also stated that harnessing the significant potential of the ocean is vital to the economic wellbeing of any nation. This is particularly important for a country like India, where land-based resources are stressed. “Blue economy is emerging as a vital area of cooperation with nations like Australia and Indonesia,” he added.
Addressing the valedictory session, organized by FICCI, Vice Chief of the Naval Staff, Admiral G Ashok Kumar said a Blue Economy needs a stable and secure environment to sustain and grow. “This is enabled through effective maritime security. With growing maritime interests, the growth of our Navy is inevitable. The blue economy and maritime security are deeply intertwined and mutually dependent on each other. We will be successful in moving ahead in a cohesive and coordinated manner with a clear-eyed focus on the greater good at the national regional and global level,” he added.

Blue Economy opportunities for India spans the entire spectrum from energy to ecology, fishing to tourism. For instance, of a potential fish resource of 5.3 million metric tons in India’s Maritime Zone, only about 70 per cent is fished. 90 per cent of this catch comes from fishing up to 50m contour, highlighting opportunities for deep-sea fishing. India’s offshore wind energy generation potential is more than 300 GW, 1/10th of which is currently planned to be tapped. Large Marine Ecosystems in the Bay of Bengal comprise 8 per cent of the world’s Coral Reefs and 12 per cent of Mangroves, opening opportunities for Coral Reef tourism, apart from ecological conservation.