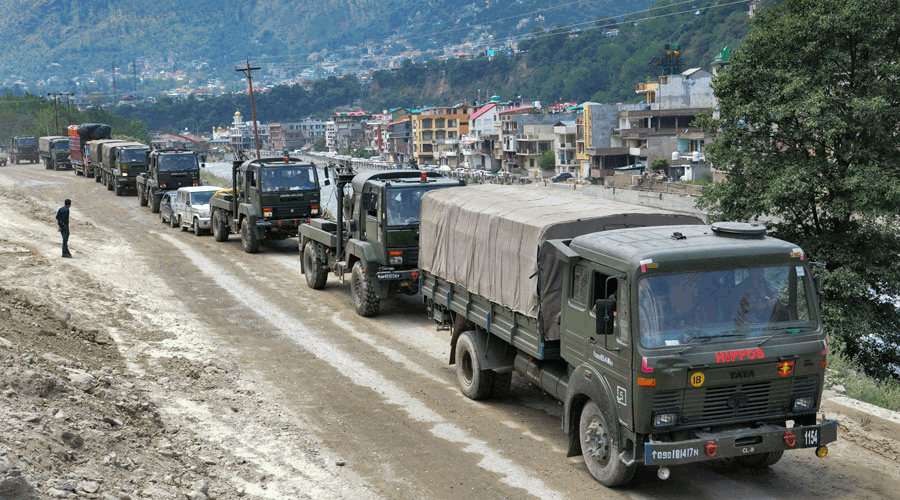 The author assesses the disengagement so far between the opposing parties and finds in it the reasons to be apprehensive. He advocates using our Kargil experience to handle the problems and shortcomings we face, with the Chinese apparently not ready to concede to our basic stance.

After nearly three months of hogging the headlines, it appears that the news of intrusions by China in Eastern Ladakh has gradually moved from front to middle to the last page in the print media. The frenzied reporting in electronic media with satellite images and operations rooms with anchors in full throttle in the studios appears to have taken a break. Public memory is short and keeping issues of national security live, especially of areas in the distant mountainous inaccessible tracts of our northern borders, is not easy. The more exciting politics of Rajasthan, gold haul in Kerala with the added spice of a “femme fatale”, encounters in the hinterland and India’s myriad other problems absorbs the Indian mind more. Is this the fait accompli China wanted?

The situation in Eastern Ladakh continues to be alarming and public focus should remain on the developments in Ladakhtill the issue is resolved and status quo ante restored on the border. We cannot forget that 20 of our brave soldiers were martyred by the cold-blooded betrayal of PLA. (People’s Liberation Army).After the last meeting between India’s NSA and Chinese Foreign Minister on 05 Jul 20, and the last Lt Gen level talks in mid-July, nominal disengagement on ground has taken place; however, it appears to have stalled again.

So far, information available indicates that disengagement and creation of a buffer zone has been completed in Galwan Valley, and some disengagement in Hot Springs area but in all other areas of intrusion like Depsang and Pangong Tso there is little or no noticeable withdrawal. There are reports in Chinese media that the disengagement is complete. It appears that they have no intention of moving back and are enforcing unilateral altering of LAC as per their perception. It is clear that China has taken advantage of the undemarcated boundary by intruding into disputed areas and even extending their claim line disregarding Indian interests.

The talks are excruciatingly slow with no signs of PLA moving back to their pre-May positions in the near future. All the additional troops and war like equipment deployed behind these intrusions, in-depth areas, have not moved back, either. In the present scenario, Rakhsha Mantri himself has expressed some doubts about the outcome of the negotiations.  From their present positions, it is easy for PLA to tactically move into an offensive mode or use this as a ruse and attack elsewhere. We cannot trust a proven adversary, who has shown consistent disregard and disrespect for international norms, treaties and agreements. India will have to remain prepared not only till the oncoming winters but even beyond. Not standing up resolutely now will give the PLA the space to revert to its game plan at a later stage. India will have to keep its options open for an offensive to recover intruded areas, or another area, at a time of its own choosing.

Experts have analysed and put forth various reasons for China’s aggressive attempts to grab territory and unilaterally change the LAC to new claim lines. They have also violated all the agreements nurtured over the years and carried out a murderous attack on Indian soldiers at Galwan Valley. All these actions boil down to the unscrupulous plans of teaching India a lesson to keep it from gaining international stature. Particularly, now that many countries have woken up to the dangers of Chinese hegemonic designs, they will play every card to prevent Indiamoulding public perception and leading the global charge against their dubious plans.

Although China’sintentions are clear there is a need to analyze their game plan to ascertain why China targeted India so confidently and with such impunity. China would have analysed India’s strengths and weaknesses and then decided to go in for this low-cost option of grabbing territory (graphically referred to as ‘salami-slicing’) and moving the alignment of the LAC unilaterally in keeping with their perceived strategic requirement. China obviously gained an advantage by surprising and preventing India from making the first move in these areas. Perhaps, we could have used the initial window of opportunity we had, for a tit for tat in another area? This would have given India an advantage on the negotiating handle.

Let us look at the past to see if there are any lessons for the future.

It’s the right time to look back at Kargil conflict which took place 21 years back, the last major conflict India fought, although the enemy then was Pakistan and not China. The exemplary bravery by officers and men stood out throughout the Kargil conflict. In daring operations, with the enemy having taken tactically advantageous positions, India lost 527 soldiers including many officers. But, they did not give up till the given mission was accomplished. Similar kind of raw courage and bravery was displayed in the Galwan Valley incident also by Indian Army proving that come what may, whether against Pakistan or China, the Indian Armed forces will deliver to the last man.

However, India needs to look at the broader aspects of Kargil. Did we follow through with the lessons of Kargil? How have we fared in the last two decades after the Kargil conflict in preparing for the future wars? While many of the major recommendations of the Kargil Review Committee have been implemented fully, some are yet to be implemented or only partially done. Two major inadequacies were pointed out by the Kargil Review committee. One on deficiencies in surveillance and management of intelligence and second on the need for military modernization and equipping our forces with modern weapons and gear.

Twenty years since, we are still plagued by inadequate surveillance capability and intelligence analysis as also huge gaps in defence modernization and equipment holdings for all three services.

In particular, there are serious shortages in fighter aircraft. We are paying the price for the dwindling defence budgets over the years which has affected our modernization and created operational voids. With the Chinese sitting pretty on the borders we have gone in for emergency purchase of extreme cold weather gear for over 30000 troops, and procurement and upgrading of fighter jets and other deals worth ₹38,900 crores. This equipment will take nothing less than three to five years to materialise. Weapons and equipment cannot be bought off the shelf and they take time.SOSpurchases like this will always be more costly and less likely to meet all our qualitative requirements.

In the current instance, it will be premature to conclude that there was an intelligence failure like it is now accepted in the case of Kargil. There are multiple agencies for intelligence gathering through ground, air and satellite-based resources. These inputs and imagery are analysed and processed by dedicated organizations and then disseminated to armed forces. The success of intelligence is in interpretation, analysis and timely dissemination to the end users. Whether or not there were any gaps in this is a matter for detailed investigation at the appropriate level.

The report also highlighted the need for better integration of Service Headquarters with the Ministry of Defence. Thankfully, a Chief of Defence Staff has been appointed. Needless tinkering with the Armed Forces in areas such as status of the Armed forces, their pension, security of cantonments and similar pinpricks should be avoided as it keeps Armed forces disproportionately more involved in protecting their turf and distracts them from operational issues.

Besides intelligence gathering and analysis, the most important requirement to prevent such a blatant offensive incursion by China or Pakistan in the future is to remain fully prepared for a two and half front war. This is now inevitable and we have no options. The present Government is a stable and strong Government. It’s time to look at our long term requirements of modernization and capacity building. There is a need to cater for our ability to fight a two front war. China will not dare to unilaterally try and change the border alignment as long as our conventional military capabilities are adequate to serve as a strong deterrent tool. A consistent and well thought out modernization plan is the need of the hour. If we have the political will to do this, we can succeed.

Economists would propagate that should we enhance allocations for defence the impact on growth and development would be telling, but very few would say that we will be shattered beyond recovery for years if there is a war. And the only known and trusted way to prevent a war is to be prepared. In the interim, we need the support of both the US and Russia to increase our military muscle as also preempt any misadventure by China.

We must mend fences with our neighbouring countries. While China and Pakistan will remain our adversaries in the foreseeable future we must rebuild our bridges with our neighbours with a sense of urgency. While Nepal and some other neighbourhood countries have already tilted towards China we have to prevent them from falling completely into China’s lap. There is a need to look for out of the box ideas rather than the same stale mindset.

This is a decisive moment. Timely actions initiated now will ensure a bright and secure future for India.

A paratrooper who has served in Ladakh at various levels, and has also commanded a division in Eastern Ladakh.