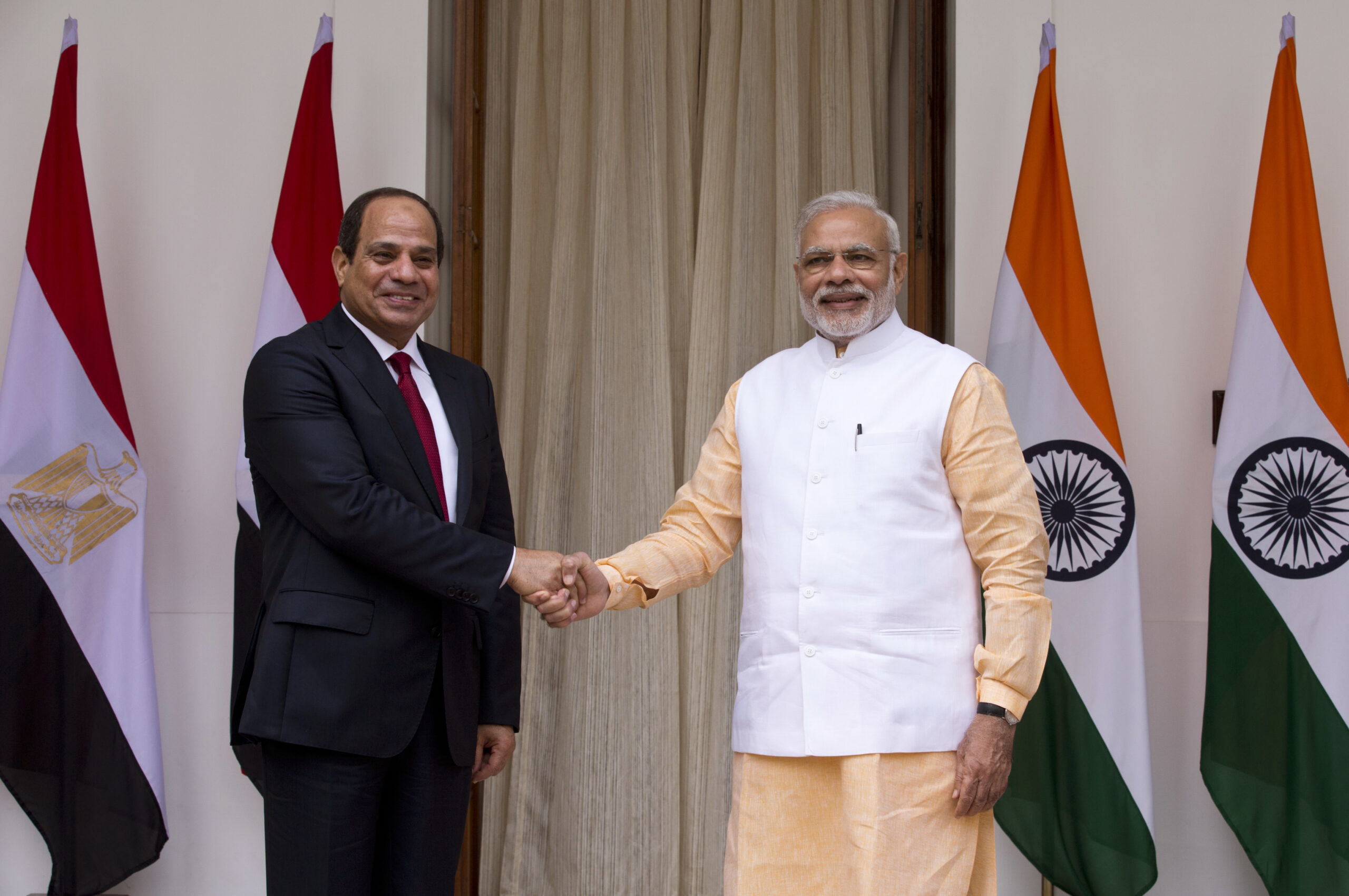 Egypt and India, both being ancient civilisations, trace a relationship that dates centuries back. Both countries were the pillars of the Non-Aligned Movement. Egypt today is an important pivot for furthering our West Asian interests in addition to offering substantial potential for our defence industry. Recent endeavours to strengthen bilateral relationships are bearing fruits, and the acceleration needs to be maintained in a world witnessing a power shift to the East.

India and Egypt are celebrating 75 years of diplomatic relations this year, establishing people-to-people relations on 18th August 1947. These are two of the world’s ancient civilizations and share a rich trade history and people-to-person ties. After independence from the British, post-World War 2, both countries have also been crusaders of the Non-Aligned Movement, rallying other nations to exercise their strategic autonomy and shun the US or USSR-led camps.

Relations between the two countries, which had plateaued after that, are now on a sharp upswing. The recent announcement of President Sisi accepting the Indian invitation to be the Chief Guest for the Indian Republic Day Celebrations -2023 caps a year of intense engagement and is perhaps a clear and definitive indicator of the enhanced cooperation and growing trust between the two countries.

Located at the junction of three continents; Asia, Africa and Europe (across the Mediterranean Sea), Egypt is an important leader of the Arab world and an established leader of the African continent. Suez Canal, linking the Mediterranean and the Red Seas, is the shortest sea link from East to West and is crucial for global trade. It is also a pivotal driver of Egypt’s importance in the region.

With a population of over 100 million, Egypt is the largest Arab nation and has traditionally played a determining role in regional politics for decades. India’s engagement with Egypt and interests go well beyond historical relations, and there is an explicit acknowledgement in India of the status and importance of Egypt in the West Asian region. As India seeks to expand its interests in the West Asian region and Africa as a part of its ‘Look West’ policy, peace and stability in Egypt and close bilateral cooperation are vitally important.

India and Egypt have been trying to forge a closer understanding of bilateral and regional issues over the past few years, especially since 2014, when coincidently, both PM Modi and President Sisi came to power,

External Affairs Minister Late Sushma Swaraj visited Egypt in August 2015, and the two sides decided to scale up security and counter-terror cooperation. President Sisi was later on a state visit to India in September 2016, which was significant in setting a closer narrative of cooperation for the two countries. PM Modi and President Sisi have met a number of times, exchanged notes on regional issues and sought closer cooperation. During COVID-19, India came to Egypt’s help and supplied vaccines.

2022 has been a year of unprecedented intense engagements between the two countries. After the outbreak of Russia Ukraine war in February 2022, India came to the rescue of Egypt by offering to supply wheat to meet its food security requirements. Once Egypt accepted, promptly a shipment of 61,500 metric tons of wheat was approved by India. During his first visit to Egypt in September, Defence Minister Rajnath Singh signed an MoU on defence cooperation. The MoU is a landmark agreement and aims to formalise bilateral defence cooperation and explore areas for partnership in defence production and setting up defence industries.

Following this visit, External Affairs Minister (EAM) Dr S Jaishankar too visited Egypt from 13-15 October, his first official visit to Egypt as EAM. During the visit, he underlined India’s commitment to taking the bilateral relationship with Egypt to a higher level. He also highlighted how bilateral trade had witnessed a significant jump, with 2021-22 being the highest ever, over US $ 7.2 billion. As India takes over the G20 Presidency, Egypt has been named one of the few select countries as ‘Guest Country’; yet another indication of India’s importance to Egypt as a partner. Egypt is also one of the six countries that have expressed interest in purchasing LCA Tejas aircraft from India. Further, media reports suggest that Egypt has shown interest in buying Indian BRAHMOS missiles too.

Egypt and India are perhaps in the best phase of their bilateral relationship. ‘Egypt is the gateway to Africa for Indian companies’ is how Egypt’s Minister of International Cooperation Rania Al-Mashat chose to describe the hugely attractive investment and business opportunities in Egypt while addressing the 15th session of the CII-EXIM Bank Digital Conclave on the India-Africa Project Partnership in September 2020.

Egypt is also important as a potential partner in the ‘Make in India” initiative and could be a lucrative market for Indian industries, co-production units, defence products and joint defence manufacturing. As India commences its G20 presidency, it aims to project the voices and aspirations of the ‘Global South’ and Egypt forms an important part of that discourse. Within the West Asian region, India has already signed comprehensive strategic partnership agreements with Saudi Arabia and UAE. With Israel, too, India shares a strategic partnership. Given the current trajectory of engagement and Egypt’s importance in the region, Egypt may soon be the next country with which India signs a ‘comprehensive strategic partnership agreement’. India-Egypt ties are definitely on an upswing and look set to scale higher post the Egyptian President’s visit on the Indian Republic Day.