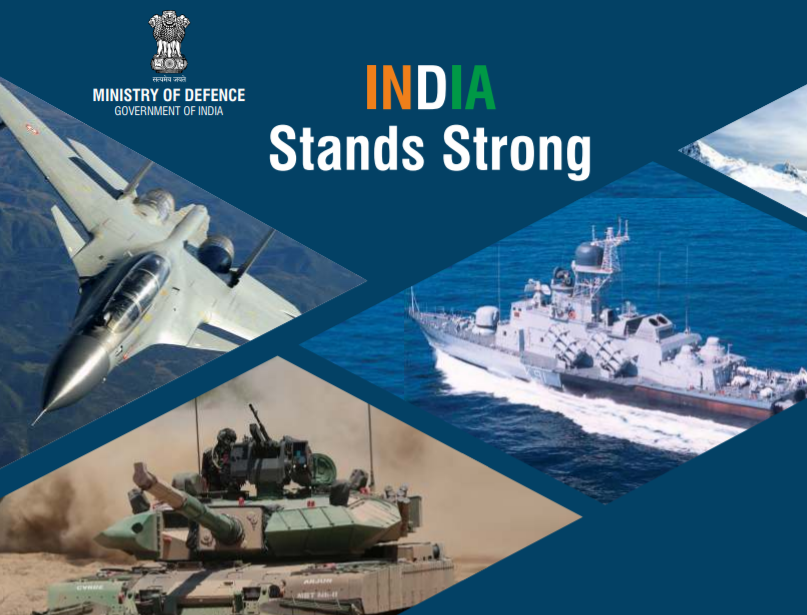 The book ‘India Stands Strong’ released by the Ministry of Defence (MoD) in May 2018 showcases its major achievements in diverse fields ranging from Defence Diplomacy to Women Empowerment, Swachh Bharat Abhiyan, Green Initiative and the International Yoga Day. These subjects are important but cannot form the basis of performance appraisal of the ministry whose primary, if not the only, objective is to ensure optimum level of defence preparedness.

To be fair, the publication also gives a lot of information about defence reforms, acquisitions and production, which have a direct bearing on defence preparedness, and showcases achievements of the Defence Research and Development Organisation (DRDO) and the Indian Coast Guard to boot. It fails to impress though as the information is sketchy, especially in regard to defence reforms, acquisitions and production.

For as long as one can remember defence reforms have been all about abstruse issues like appointment of the Chief of Defence staff, integration of the armed forces headquarters with the ministry, defence planning, civil-military relations, and the like. But the achievements listed in the publication largely steer clear of all these issues and, instead, talk about issues that can be considered to be a part of defence reforms only if one construes ‘defence reforms’ in the widest possible sense as an all-encompassing term.

Barring a reference to the A&N Command, Defence Planning Committee and the Shekatkar Committee, all other achievements listed in the publication are out of place in the context of hardcore defence reforms. At best, this list of achievements serves as a useful index of the steps taken over the past four years to streamline acquisitions and boost defence production. Even if all these steps are seen as a part of defence reforms, it would have been more meaningful to indicate the outcomes of these steps for the real achievement can best be measured only by looking at those outcomes.

What about the other ‘defence reforms’? Delegation of ‘comprehensive inter-Service disciplinary powers’ to the A&N Command has been projected as a step to operationalise jointness. One wonders if inter-services disciplinary powers are really the key to achieving jointness. It is really droll. As for the Defence Planning Committee, it is too early to claim this as an achievement. Setting up of committees is not an extraordinary step. A mention of what transpired in the first meeting of the committee held on 3 May 2018 would have lent some substance to the implicit claim that it is a path-breaking step taken by the government.

The ministry has missed an opportunity to educate the people about the Shekatkar Committee as the publication only says that the prominent recommendations of the committee have been accepted and restructuring/rightsizing of the armed forces is under progress. It bears recalling that the committee had submitted its report in December 2016 and some of its recommendations were accepted only in March 2018. An indication of how the restructuring and rightsizing are being achieved would have been a much better manifestation of the ministry’s achievement than a mere statement that the major recommendations have been accepted by the government.

The publication gives the service-wise and year-wise details of the 204 contracts signed in the last four years for a total amount of Rs 2,47,987 crore. This works out to an average of 51 contracts for Rs 61,997 crore every year. One cannot say if these figures indicate an improvement in the pace of contracting as these figures have not been compared with the figures for the earlier years. Nor does the publication contain facts and figures to show how the ‘Make in India’ initiative is shaping up in defence.

The publication lists out some ‘unprecedented steps taken to build sufficient stocks of ammunition’ but the details are sketchy. It mentions that full powers have been delegated to the Service Headquarters (SHQ) to procure ammunition and that deliveries have commenced against 100 contracts signed for Rs 25,000 crore which has resulted in substantial improvement in the stocking position. It also mentions that procurement worth another Rs 25,000 crore is in the pipeline.

This projection is inconsistent with what the army conveyed to the standing committee on defence in March 2018. Commenting on the inadequacy of allocation under the revenue segment of the budget which caters for procurement of ammunition, the army representative told the committee that ‘allocation of insufficient funds to meet the liabilities of routine maintenance, making up of deficiencies, emergency procurements and 10 (I) procurements, will definitely have a negative effect’ and that it shall also affect the serviceability of the equipment that the army is holding. [Forty first report of the Standing Committee on Defence (16th Lok Sabha), para 1.4]

The publication shows that the value of production of the Defence Public Sector Undertakings (DPSUs) and the Ordnance Factories under the Ordnance Factory Board (OFB) rose from Rs 46,380 crore in 2014-15 to Rs 58,759 crore in 2017-18. When seen in isolation, one cannot make out whether or not these figures indicate improvement in the cumulative value of production but when juxtaposed with the figures for the preceding four years these very figures conclusively establish a vast improvement in output.

The annual reports of the MoD for the relevant years show that the value of production of the OFB actually fell from Rs 15,390 crore in 2010-11 to Rs 11,123 crore in 2013-14 whereas the value of production of the DPSUs rose only marginally from Rs 32,395 crore to Rs 32,973 crore during the same period. The value of production in the past four years indicates a vast improvement in the performance of the OFB and the DPSUs. Unless this is the result of some accounting jugglery – though that does not appear to be the case – it is facts like these that should have been showcased with greater effect. This is not the only achievement that has been underplayed in the publication. One of the pictographs in the publication shows that direct import as a percentage of the total value of production has come down from 29.07 per cent in 2014-15 to 23.50 per cent in 2017-18. The use of ships to denote the horizontal line in the graph leaves it to one’s imagination whether this percentage is related only to the defence shipyards or the total value of production by the public sector units. In either case, it is an achievement that deserved better showcasing.

Bland statistics and statements about the steps taken to improve the systems and procedures are not a true measure of achievement. The proof of the pudding is in the eating. Many of the achievements mentioned in the publication do not carry conviction. A true measure of achievement is the outcome of efforts made by an individual or an organisation. It is not enough to make general statements like the one that there has been a substantial improvement in stocking of ammunition. The granular details of the shortage given in the 2015 report of Comptroller and Auditor General and reiterated in a later report of 2017 cannot be wished away by mere claims of improvement in the situation. In the ultimate analysis it is specificity that pays.